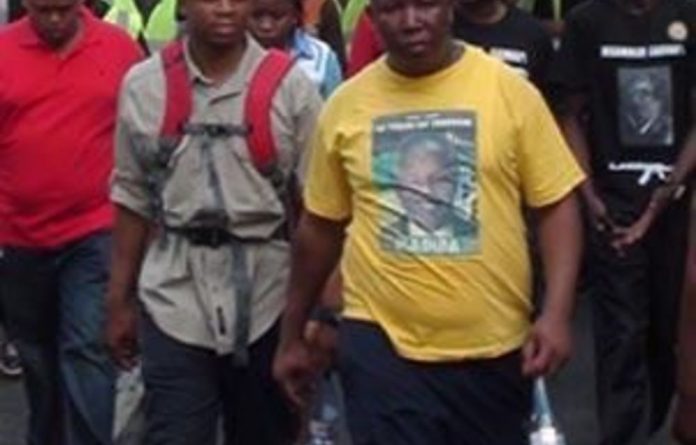 The ANC Youth League concluded its economic freedom march in Pretoria on Friday as they handed over a memorandum of demands at the Union Buildings.

Over a thousand tired marchers made their way from Caledonian stadium in Arcadia to the gardens surrounding the seat of South Africa’s government.

Led by the league’s president, Julius Malema, they continued in the disciplined vein that marked the procession they began in Johannesburg on Thursday morning.

The approximately 1 000 marchers into the gardens surrounding the Union Buildings, singing: “Zuma, it’s time for change”.

A delay followed, as the league demanded that a Cabinet minister accept their demands.

“We are not marching against this government. They have been doing a good job but we want them to do more,” Malema said, adding that the memorandum would only be handed over to a Cabinet minister or deputy.

Newly appointed Public Works Minister Thulas Nxesi eventually emerged to accept the memorandum of demands, which were read out by the league’s deputy president, Ronald Lamola.

Nxesi promised to take the league’s demands to the executive arm of government.

“It wasn’t long ago when I was on the other side of the fence and marching like you. I assure you, I will take this memorandum to the government and we will consider your demands,” he said.

Earlier, Malema paid homage to the marchers who had walked with him from Johannesburg. “You have remained disciplined — and disappointed a lot people who expected violence. Well done!”

Malema had led the final leg of the economic freedom march from the Caledonian Stadium in Pretoria to the Union Buildings earlier than expected on Friday, proceeding along Pretorius street at 9.30am.

Supporters arrived at the stadium in the early hours of Friday morning after walking from Johannesburg on Thursday to create awareness of their economic needs.

Malema led from the front, walking most of the 50km trip, barring a few breaks on a truck.

He handed over a memorandum of grievances to the Chamber of Mines in Johannesburg’s city centre on Thursday, before marching to the Johannesburg Stock Exchange in Sandton.

The walk from Sandton to Tshwane, along the R101 Old Pretoria Road, took eight hours.