Why are some ‘occupiers’ more equal than others? 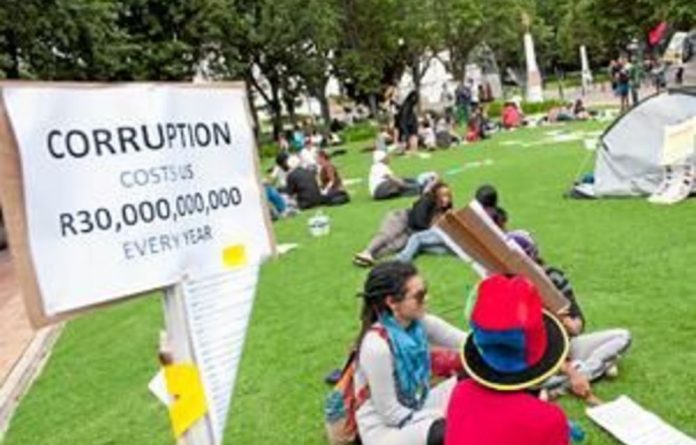 About 200 Cape Town residents participated in the call for a “World Revolution Day” on October 15, inspired by the growing worldwide Occupy movement. We arrived at the Company Gardens next to Parliament in typical Capetonian fashion: mostly late, disjointed, and with a huge array of goals and personal agendas for the first day.

In fact, the majority of “occupiers” arrived so late for the revolution that the clean-shaven undercover security operative (sporting an earpiece and touristy camera) had already deemed the protest to be non-threatening and was long gone. The police barely noticed the relaxed picnic atmosphere that was apparent once the crowd grew to more than 70.

Despite the tame beginnings of #OccupyCapeTown, did the day did have #OccupyWallSt potential? Cape Town is one of the most unequal, segregated and racist cities in the world, with hundreds of thousands of angry (though demoralised) youth waiting for real change. The townships are a ticking time bomb anticipating the intersection between screams of Sekwanele! and sparks of hope that a mass-based social movement could provide.

Would the 99% actually show up? In the end, those who arrived, with the exception of an entourage from Communities for Social Change, were predominantly from the upper reaches of the 99.

There was potential in this space of mostly white privileged activists. Some were acutely aware of how their privilege posed problems for the bottom 80%. Seeking to engage directly with issues of white supremacy, class and patriarchy within the 99%, they tried to create a space of solidarity with poor communities without speaking for them or co-opting their struggles. To these few activists, Occupy Cape Town was an exciting experiment in building radical equality that is actively asserted, not merely assumed.

As the day progressed, however, many of us were disheartened by the most vocal of the 19%. Our four general assemblies seemed to be dominated by well-read internet activists who came with all the answers. Paraphrased crudely:

Yet when participants critically reflected on the racial make-up of the meeting, there were demands from a barrage of “colour-blind” activists to stop “making this about race”. When class was brought up in the assembly, it was countered with calls not to divide the movement. “We are the 99%!” they cheered. When women spoke (and few did speak in this male-dominated space), it seemed that their points were often ignored. So how did the ideals of an occupation for the immediate assertion of equality get perverted so quickly?

The American radical Malcolm X once said: “If you stick a knife nine inches into my back and pull it out three inches, that is not progress.” Many say that the post-1994 era was just that: the knife of white supremacy is still present and oppression is now couched in terms of the ideals of a liberal non-racial democracy. Radical groups such as Blackwash use much more direct language: “Fuck the rainbow nation. Coz 1994 changed fokol!”

Abahlali baseMjondolo says that, although there are no more pass laws or legal racism, poor and black people (especially black women) are still oppressed — by essentially the same system that gave birth to apartheid. And if “oppression”, as John Holloway puts it, “always implies the invisibility of the oppressed”, one can begin to understand that a theoretical gulf exists between the lived experience of those whose voices are unheard and the liberal white activists who proclaim that we are all, in fact, the same.

General Debate
The most telling experience of the day was the general debate before Occupy Cape Town marched up Long Street to the offices of e.tv. Someone expressed their concern that a placard proclaiming “FUCK the Rich” would be used against us when filmed by e.tv. Others agreed, saying that it was a violent statement, released negative energy, and was not in line with the peaceful purpose of the “occupation”.

Trying to use democratic procedures, several white liberal activists said there should be consensus on the slogans used on our placards and banners; nothing seemingly violent or racist was acceptable. The group of poor black protesters from Mannenberg who had written the placard reluctantly agreed to leave it behind. Yet this decision was resisted by an independently minded group member and that very placard eventually found its way on to TV.

If, as radical feminist bell hooks says, “patriarchy rewards men for being out of touch with their feelings”, a corollary could be that, in a white-supremacist, patriarchal, capitalist society, white men are not only out of touch with their own feelings and those of others but they are also unaware of the modes by which they belittle and oppress others. This is no less true of a radically democratic “occupation” than within the oppressive institutions of society itself.

It was perhaps to be expected that Occupy Cape Town would be dominated by liberal whites who mostly desired the tweaking of capitalism, or the creation of idealistic utopias by withdrawing from the system (rather than overthrowing it), and who would attempt to build some sort of ideological hegemony based on their own privileged Western orientation.
If some occupiers are more equal than others, it is about time that white male activists who sincerely want to dismantle oppression begin to take seriously the voices of the oppressed from within the 99%.

Taxing finance
Next week G20 leaders, including Jacob Zuma, meet in France. On the agenda is a proposed financial-transactions tax. Médécins sans Frontières/Doctors without Borders and the Treatment Action Campaign call for Zuma to support such a tax and for its receipts to be spent on health issues, especially HIV/Aids. Go to mg.co.za/financetax to read the call to Zuma.

It’s not just me who’s worried. Teachers unions are concerned about the capacity of schools to operate safely — and rightly so
Read more
Advertising
Continue to the category
Africa