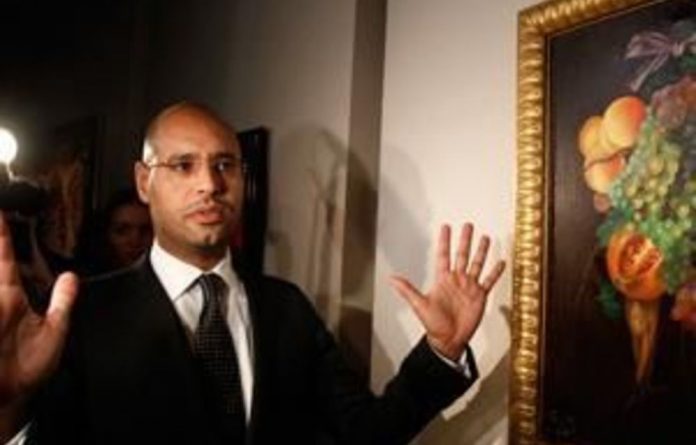 Muammar Gaddafi’s son Saif al-Islam is expected to try to surrender to the ICC — or seek refuge with one of his father’s former allies, possibly Robert Mugabe.

Saif al-Islam Gaddafi is expected to try to surrender to the International Criminal Court or seek refuge, possibly in Zimbabwe, as he races to escape his father Muammar Gaddafi’s grisly fate.

Zimbabwe’s Robert Mugabe was a beneficiary of Gaddafi’s largesse during the 42-year rule of the slain despot, a self-styled African “king of kings”, and is not a signatory to the ICC treaty that obliges member states to hand over wanted suspects to the Hague-based institution.

The ICC says the 39-year-old has been in touch, however. It urged him to turn himself in, warning it could order a mid-air interception if he and his mercenary guards tried to flee by plane from his desert hideout for a safe haven.

The ICC’s comments offered some corroboration of reports from Tripoli’s new National Transitional Council (NTC) leaders and African neighbours that he has taken refuge with Tuareg nomads in the borderlands between Libya and Niger.

“Through intermediaries, we have informal contact with Saif,” ICC Prosecutor Luis Moreno-Ocampo said.

“We have learnt through informal channels that there is a group of mercenaries who are offering to move Saif to an African [state] not party to … the ICC. The office of the prosecutor is also exploring the possibility to intercept any plane within the air space of a state party in order to make an arrest.”

In Beijing on Saturday, Moreno-Ocampo said Saif al-Islam had said he would prove he was innocent of alleged crimes against humanity.

Desert friends
However, surrender is only one option. The Gaddafis made friends with desert tribes in Niger, Mali and other poor former French colonies in West Africa, as well as farther afield in countries such as Zimbabwe.

South of Libya’s border, Niger, Mali, Chad and Burkina Faso are all signatories to the treaty that set up the ICC, established to give a permanent international tribunal for crimes against humanity after ad hoc bodies set up for Rwanda, the former Yugoslavia and Sierra Leone.

Without its own police force, the ICC depends on cooperation from member states, which do not include world powers the United States, Russia and China.

Like Zimbabwe, Algeria — which took in Saif al-Islam’s mother, sister, brother Hannibal and half-brother Mohammed — is also not a signatory.

‘Nervous and confused’
A bodyguard who saw Saif al-Islam as he fled last week from one of the Gaddafi clan’s last bastions near the capital said he seemed “nervous” and “confused”. He escaped even though his motorcade was hit by a Nato air strike as it left Bani Walid on October 19, the day before his father died in Sirte.

Three of Saif al-Islam’s brothers were killed in the war. Another, Saadi, has found refuge in Niger.

The arrest or surrender of Saif al-Islam would bring a new prominence for the nine-year-old ICC, whose highest profile suspect to date is Sudanese President Omar al-Bashir, who remains defiantly in office, defended by many fellow Africans.

Following the killing of Muammar Gaddafi, most probably at the hands of fighters who filmed themselves battering and abusing him, Western allies of Libya’s new leaders urged them to impose respect for human rights.

NTC leaders would like to run their own trials, but acknowledge that their writ barely runs in the deep south.

Their Nato allies, now winding up a mission that backed the revolt, have expressed little enthusiasm for hunting a few individuals across a vast tract of empty continent — though French troops based in West Africa might be best placed to step in with transport if Saif al-Islam did choose to surrender.

The ICC’s Moreno-Ocampo said in his statement: “If he surrenders to the ICC, he has the right to be heard in court, he is innocent until proven guilty. The judges will decide.

“If the judges decide that Saif is innocent, or has served his sentence, he can request the judges to send him to a different country as long as that country accepts him.”

Saif al-Islam was once seen as a liberal reformer, architect of a rapprochement with Western states on whom his father waged proxy guerrilla wars for decades. But he responded with belligerent rhetoric after the revolt erupted in Libya.

The ICC accuses him of hiring mercenaries to carry out a plan, worked out with his father and Senussi, to kill unarmed protesters inspired by “Arab Spring” uprisings elsewhere. — Reuters