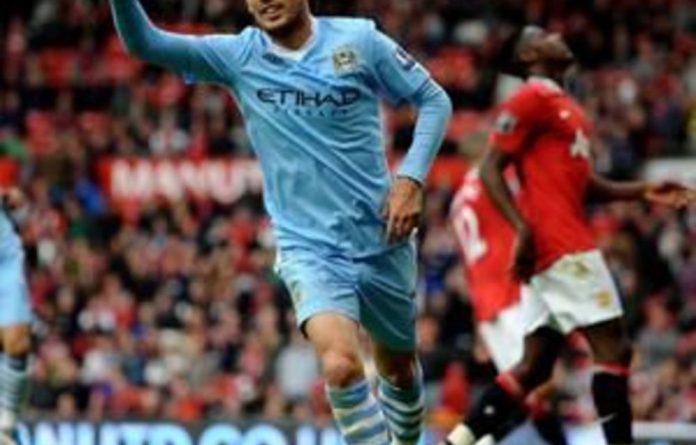 The skill of seeing a football pitch as a field of endless angles rather than a north-to-south battlefield is beautifully expressed by David Silva, the star of Manchester City’s astonishing 6-1 win at Old Trafford.

Comfortably the player of the season so far, Silva has transformed Roberto Mancini’s team from powerful to pretty, from mechanical to sometimes majestic.

If one contribution affirmed his right to be classified as a world-class free thinker it was the pirouette and round-the-corner pass in the United penalty box that set up James Milner to cross for Mario Balotelli’s second goal 60 minutes into Sunday’s demolition.

On replay, you see Silva abandoning the game’s normal linear tendencies and turning backwards to bamboozle the defender with a ball that was impossible to anticipate. The club of modern footballers whose passing can be described as unplayable is regrettably small. Its members tend not to be large either.

In Spain, Silva shares a brotherhood with Xavi, Cesc Fabregas and Andres Iniesta and is fighting hard for a starting place with the world and European champions. At City he is two things: a solo artist and the player who has brought the rest of the band to life.

Arriving here last year he looked destined for a firefly role on the wing but soon it was obvious that he was a born No 10, a lock-picker who could be trusted to take up his own position anywhere in the forward areas.

Have one or want one
Top-level football could reasonably be divided into teams who possess this kind of player and those who desperately want one. They bring fluidity and that rare element of surprise as lesser team-mates learn to feed off them. “Merlin”, as Shaun Wright-Phillips called him, is now 38 league games into his City career: a whole personal season, book-ended by his man-of-the-match display at Old Trafford. At £24-million from Valencia in

July 2010, he cost £2-million less than Milner: a good, committed English player who would tie his brain in knots if he tried some of Silva’s subtlest moves. With his new love of apple porridge, and the comfort of Samir Nasri and Sergio Aguero to spark off, Silva has subverted the rule that says the gifted foreign player must “adapt to our ways” or perish.

Instead he has made the Premier League adapt to him, promoting artistry, and forcing United once again to confront the lack of a similarly gifted trequartista in their own ranks.

Silva is not without help. The back of City’s team is now reassuringly tight, even with rotating full-backs. In front of the back five, Gareth Barry, Nigel de Jong and Yaya Toure provide the central platform on which Aguero, Silva, Balotelli and Nasri can improvise. Oddly this exotic mix looks better suited to Premier League domination than success in Europe.

City’s Champions League form has been unconvincing but they passed their first big test domestically with a 6-1 victory and rave reviews. “I remember when I first saw him playing for Valencia against Inter in the Champions League. He was only young then but you could see his potential. He was astonishing,” Mancini said before the Villarreal game in midweek.

“He has improved a lot in the last two years and now he is one of the best players in Europe, if not the world. He could play for Real Madrid or Barcelona, but I am glad to say he plays for Manchester City.”

Last season he was a fans’ firm favourite, winning player of the month awards from October to December. Carlos Tevez called him “the best signing we’ve made”. Like many of his Spanish contemporaries he comes over as a no-fuss kind of pro with no interest in squad politics.

The pleasure in the execution
The feeling is that Spain have persuaded a generation of footballers that devotion to their art is the point of life. The pleasure is in the execution. On United’s turf, you could see Silva’s whole being concentrate on the killer pass to Edin Dzeko for his second, City’s sixth.

“For David Silva it is easy to play football. Everything is easy for him,” Mancini says. This is a manager tossing a sardine to the gulls. Silva’s art is easy only in so far as he knows he has an asset few possess.

He sees not the congestion but the opening, the space. Another precious attribute is to be able to slow the brain down to think at his own speed rather than the crazy pace of the game around him.

These diminutive game-changers are in the ascendancy again, thanks mainly to Spanish football and Lionel Messi. For all their Messianic corporate strategies, City made their great leap forward by buying an artiste out of Spain’s reserves, and from a club (Valencia) outside the big two of Barcelona and Real Madrid.

As United found with Eric Cantona, the Eureka-acquisition lights up the whole team and not just the space he occupies. It liberates lesser players and reassures them with the knowledge that there is a higher talent in their midst that will rescue them from trouble on bad days. Silva is City’s chain reaction. —