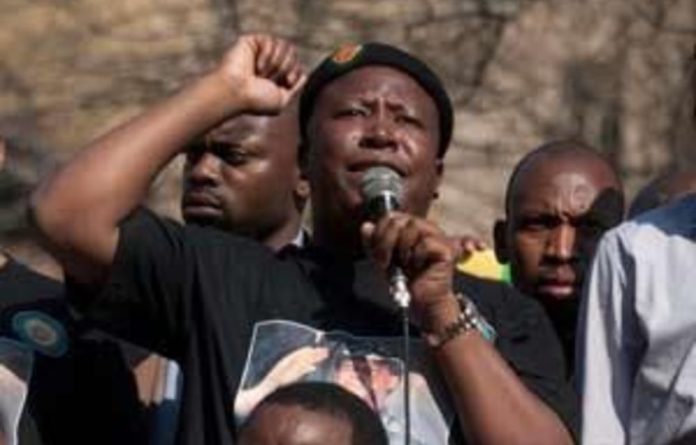 The ANC Youth League on Monday sharply criticised media reports for saying its president Julius Malema will soon be arrested for his role in alleged tender fraud.

Over the weekend, the Sunday Independent reported that Malema faces imminent arrest following an investigation into an apparent tender rigging scheme in Limpopo.

“The league is concerned that every time the organisation concludes successful political programmes, certain sections of the media try to divert attention by spreading sensational lies and rumours about the leadership of the ANC Youth League,” it said via a statement in response to the report.

The Sunday Independent‘s report followed last week’s economic freedom march from Johannesburg to Pretoria, which saw the youth league hand over three separate memorandums of demand to the Chamber of Mines, Johannesburg Stock Exchange and government at the Union Buildings.

The memorandums called for extensive change to the South African economy — including the nationalisation of the country’s banking and mining sectors and the expropriation of land without compensation.

The statement also follows continued refusal by the youth body and the Hawks to comment on Malema’s possible arrest.

After several attempts for comment, Hawks’ spokesperson Macintosh Polela confirmed investigations into the matter are still underway, but would not elaborate.

“We can always confirm we are doing investigations, but we will never talk about the stage at which they are,” Polela told the Mail & Guardian.

‘Charge me, I dare you’
Malema was quoted in the Daily Sun as having challenged the Hawks to “bring it on”.

“I have never done anything wrong and maybe it would be better if the Hawks charge me so that I can explain these allegations in front of a magistrate. If the Hawks are going to open a case against me, that’s good. Let those who have evidence come forward,” said Malema.

The league maintains any attempts to distract it from its calls for drastic economic reform are futile.

“The ANCYL would like to categorically affirm that cheap and petty politics that seek to veer the organisation away from struggles for economic freedom in our lifetime will never succeed. The struggle for economic freedom in our lifetime is gaining momentum and will be intensified in all fronts because victory is certain. Those who thought and believed that wealth will not be transferred to the ownership of the people as a whole, as called for in the Freedom Charter, are illusionary.”