No acid test to find polluters 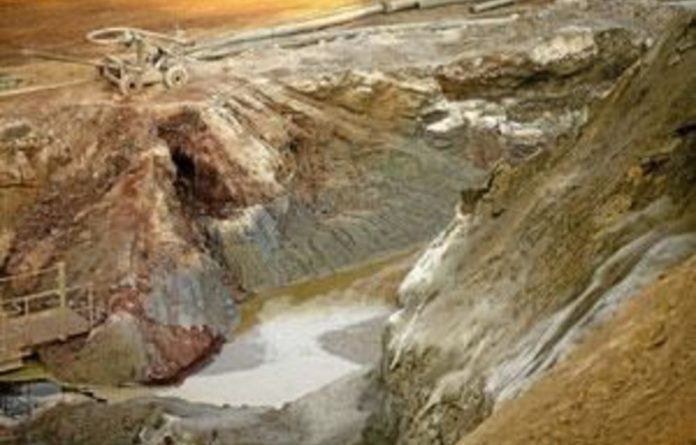 South African mines are confronted by the environmental legacy of past mining, particularly acid mine drainage (AMD) from abandoned coal and gold mines.

But mining companies shouldn’t believe they can duck legal action against them when it comes to AMD simply because of the complex nature of the problem, the chairman of the National Assembly’s portfolio committee on water and environmental affairs, Johnny de Lange, recently announced. Mining companies contend that it is difficult to apportion blame because of the large number of firms involved in mining on the Witwatersrand as far back as the 1880s.

Some of them have since closed. AMD is acidic water (with a pH lower than five), laden with iron, sulfate and other metals, that forms naturally when geologic strata containing pyrite are exposed to the atmosphere or oxidising environments. AMD can form from coal and gold mining, both in surface and underground mines.

The South African Constitution enshrines the right to an environment that is not harmful to health or well being, as well as the protection of the environment for the benefit of present and future generations. Responding to presentations by mining companies to the committee on how they would tackle the problem, De Lange said legal action against mining firms in regard to AMD might have failed in the past, but that didn’t mean it couldn’t succeed in the future.

A winning formula
DRDGold, the country’s fourth-largest gold producer, believes it has a winning formula to determine proportionate responsibility for AMD pollution. Based on the extent to which the activity of the company’s subsidiaries has proportionately contributed to the problem, it came to the conclusion that DRDGold’s subsidiaries contributed to about 1.5% of the problem.

DRDGold arrived at this figure by calculating the amount of rock its subsidiaries removed from underground as a percentage of the total amount of rock removed over the life of these operations. The amount of pollution that takes place is directly proportionate to the size of the underground cavity created through mining and is determined by calculating the total amount of rock that was removed from underground. “This, we believe, is the best available method of determining just how much of the pollutants that lie exposed in the underground cavity our subsidiaries’ activities exposed,” the company said.

DRDGold said any regulatory or administrative conduct that casts a burden in excess of what a company caused will not withstand judicial scrutiny. However, the duties associated with good corporate citizenship require companies to strike a balance between what they are legally obliged to do and what they ought to do, considering their available resources.

Budget to deal with AMD
Government set aside R225-million to treat toxic water in underground mine voids, and cleaning up hundreds of tailings and slimes dams across the Reef. In his 2011 budget , finance minister Pravin Gordhan allocated R225-million over three years todeal with AMD. More than half of this amount is earmarked for managing AMD at the Grootvlei gold mine on the eastern Wits basin.

Mariette Liefferink, the chief executive of the Federation for a Sustainable Environment, said the tailings and slimes dams were historically sited on unlined dolomite. This resulted in heavy metals and uranium — seeping into groundwater. Anthony Turton, a scientist who raised the alarm about acid mine drainage a decade ago, said that sorting out the dumps will be difficult. “The sheer scale and complexity of dealing with radioactive dumps is far worse than the water problem,” he said.

Liefferink added, “There are at least 270 tailings dams on the Witwatersrand that will continue causing acid mine drainage for hundreds of years.” She noted that families were recently relocated from a tailings dam at the Tudor Shaft informal settlement on the West Rand, because radiation levels were found to be 15 times higher than normal.

Mine closure is a process
According to the department of mineral resources, the closure process must start at the commencement of mining and continue throughout the life of a mine. It should be executed within the framework of sustainable development. The Mineral and Petroleum Resources Development Act (Act 28 of 2002) stipulates that the following closure objectives must form part of the environmental management programme:

The Act aims to:

Changing goal posts
In 2009-10 the department assessed the progress of the industry’s transformation against the mining charter objectives adopted in 2002. The racial ownership pattern of the country’s mining assets remained largely unchanged. Only 8.9% of black ownership had been attained against a target of 15% by 2009. The reviewed mining charter, launched in September 2010, seeks to correct this, emphasising that 26% of South Africa’s mining assets must be black economic empowerment-compliant by 2014. It also provides for the complete elimination of hostels on South Africa’s mines by 2014 and introduces a sustainable element, based on the understanding that the licence to operate includes a mine’s environmental, health and safety performance.

Under the new charter companies that do not comply face penalties that could include revoking a mining licence. “The changing goalposts that are presented by the new mining charter represent new hurdles for the company, some impractical, and another layer of costs. Take the employment equity component: for example, 40% of our management team is historically disadvantaged South Africans,” said Niël Pretorius, the chief executive of DRDGold, in the company’s latest sustainable development report.

“Yet, at a level below this, we cannot attract sufficient professionals, such as metallurgists, engineers and accountants to the business at a cost that we can afford. There is simply a dearth of skills in the marketplace and historically disadvantaged South African skills sometimes attach an unaffordable premium,” Pretorius said. “Material changes to the mining charter have a real and detrimental impact on the way in which we run the business and on associated costs. Similarly, the unambiguous application of legislation and the capacity to grant and monitor permitting are critical to the success of our industry,” he said.