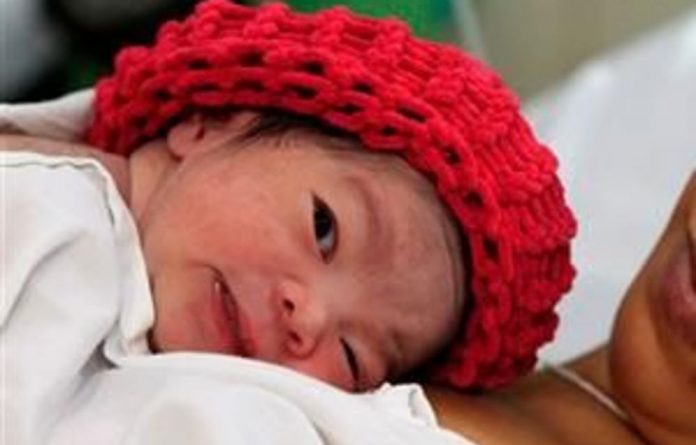 She came into the world at two minutes before midnight, a tiny, wrinkled girl born into a struggling Manila family. On Monday, she became a symbol of the world’s population reaching seven-billion people and all the worries that entails for the planet’s future.

Danica May Camacho, born in a crowded public hospital, was welcomed with a chocolate cake marked “7B Philippines” and a gift certificate for free shoes. There were bursts of photographers’ flashes, and speeches by local officials.

The celebrations, though, reflected symbolism more than demography.

Amid the millions of births and deaths around the world each day, it is impossible to pinpoint the arrival of the globe’s seven-billionth occupant. But the United Nations chose Monday to mark the day with a string of festivities worldwide, and a series of symbolic seven-billionth babies being born.

Danica was the first, arriving at Manila’s Jose Fabella Memorial Hospital at two minutes before midnight on Sunday — but doctors say that was close enough to count for a Monday birthday.

“She looks so lovely,” the mother, Camille Galura, whispered as she cradled the 2.5kg baby, who was born about a month premature.

The baby was the second for Galura and her partner, Florante Camacho, a struggling driver who supports the family on a tiny salary.

Dr Eric Tayag of the Philippines’ department of health said later that the birth came with a warning.

“Seven-billion is a number we should think about deeply,” he said.

“We should really focus on the question of whether there will be food, clean water, shelter, education and a decent life for every child,” he said. “If the answer is ‘no’, it would be better for people to look at easing this population explosion.”

In the Philippines, much of the population question revolves around birth control. The government backs a programme that includes artificial birth control. The powerful Roman Catholic church, though, vehemently opposes contraception.

Camacho, a Catholic like her husband, said she was aware of the church’s position but had decided to begin using a birth control device.

“The number of homeless children I see on the streets keep multiplying,” Camacho said. “When I see them, I’m bothered because I eat and maybe they don’t.”

Demographers say it took until 1804 for the world to reach its first billion people, and a century more until it hit two-billion in 1927. The twentieth century, though, saw things begin to cascade: three-billion in 1959; four-billion in 1974; five-billion in 1987; six-billion in 1998.

The UN estimates the world’s population will reach eight-billion by 2025 and 10-billion by 2083. But the numbers could vary widely, depending on everything from life expectancy to access to birth control to infant mortality rates.

In Uttar Pradesh, India — the most populous state in the world’s second-most populous country — officials said on Monday they would be appointing seven girls born on Monday to symbolise the seven-billion.

India, which struggles with a deeply held preference for sons and a skewed sex ratio because of millions of aborted female foetuses, is using the day to highlight that issue.

“It would be a fitting moment if the seven-billionth baby is a girl born in rural India,” said Dr Madhu Gupta, an Uttar Pradesh gynaecologist. “It would help in bringing the global focus back on girls, who are subject to inequality and bias.”

According to US government estimates, India has 893 girls for every 1000 boys at birth, compared with 955 girls per 1000 boys in the United States.

On Monday, the chosen Indian babies were being born at the government-run Community Health Centre in the town of Lall, on the outskirts of the Uttar Pradesh capital of Lucknow.

Six babies were born from midnight to 8am Monday. Four were boys.

Meanwhile China, which at 1.34-billion people is the world’s most populous nation, said it would stand by its one-child policy, a set of restrictions launched three decades ago limiting most urban families to one child and most rural families to two.

“Overpopulation remains one of the major challenges to social and economic development,” Li Bin, director of the State Population and Family Planning Commission, told the official Xinhua News Agency. He said the population of China would hit 1.45-billion in 2020.

While the Beijing government says its strict family planning policy has helped propel the country’s rapidly growing economy, it has also brought many problems. Soon, demographers say, there won’t be enough young Chinese to support its enormous elderly population. China, like India, also has a highly skewed sex ratio, with aid groups saying sex-selective abortions have resulted in an estimated 43-million fewer girls than there should be, given the overall population.

India, with 1.2-billion people, is expected to overtake China around 2030 when the Indian population reaches an estimated 1.6-billion. — Sapa-AP