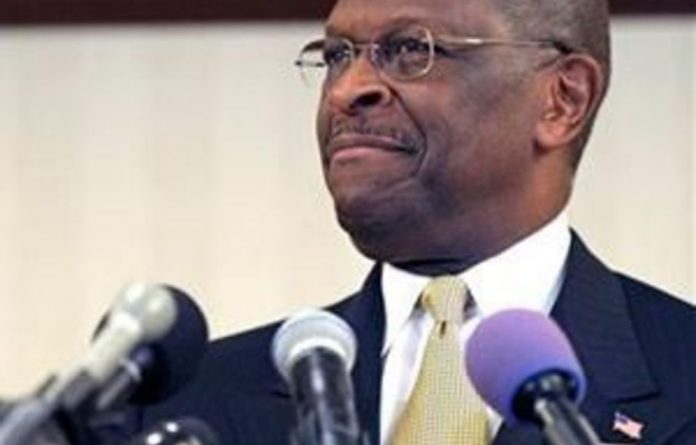 Presidential candidate Herman Cain continues his political courtship of the United States capital’s Republican establishment on Wednesday, trying to leave behind sexual harassment allegations from more than a decade ago even as the lawyer for one accuser tries to cancel a confidentiality pact so she can tell her story.

On Wednesday, Cain started his day in Virginia with a speech to doctors about his health care agenda. There, he refused to take questions about the harassment issue.

When reporters continued to ask questions, Cain’s voice rose as he said testily, “What did I say? Excuse me. Excuse me!”

His campaign manager Mark Block said he would address the questions “when it’s appropriate”.

Cain was to head to the Capitol building to sit down with Congressional Republicans. But the former chief executive of a chain of pizza restaurants is dogged by the sexual harassment allegations that surfaced on Sunday.

Inappropriate behaviour
A Washington website also reported that two women received financial payments from the National Restaurant Association after complaining of inappropriate sexual behaviour by Cain, who was then in charge of the trade group.

Many opinion polls show Cain running about even with former Massachusetts governor Mitt Romney who had been the frontrunner. Cain appeals to some conservatives because he is a political outsider at a time of anti-Washington sentiment that could help the Republicans challenge Democrat President Barack Obama in 2012.

As Cain moved into the final day of what had been planned as a political coming out in Washington, it was clear that his denials of the allegations of improper behaviour had not tamped down the furore.

Joel P. Bennett, the lawyer for one of two women, said in media interviews on Tuesday that he had asked the trade group to waive an agreement and allow her to talk openly about her allegations and to respond to Cain’s claims that the complaints were “totally baseless and totally false.”

“I know her very well,” he told CNN on Tuesday, “and I’m sure she would not make a false complaint”.

Bennett said he would have more to say after he meets with his client on Wednesday.

A spokesperson for the restaurant association, Sue Hensley, said on Tuesday night that the group had not been contacted by Bennett.

Settlement
Over the past two days, Cain has admitted he knew of one agreement between the restaurant association and a woman who accused him of sexual harassment. He has said the woman initially asked for a large financial settlement but ultimately received two to three months’ pay as part of a separation agreement.

Cain also acknowledged remembering one of the woman’s accusations against him, saying he stepped close to her to make a reference to her height and told her she was the same height as his wife.

He has said he is not aware of agreements or settlements with any other women, though Politico — which first disclosed the allegations — reported that the trade group had given settlements to at least two female employees who accused him of inappropriate sexual behaviour.

The New York Times reported on Tuesday night that the trade group gave a female employee a year’s salary in severance pay, $35 000, after she said an encounter with Cain made her uncomfortable working there. The newspaper cited three people with knowledge of the payment to the woman, who was not Bennett’s client.

Surging atop the polls only two months before Republicans begin choosing their presidential nominee, Cain scheduled a tour of Washington this week to introduce himself to the nation’s power brokers and show he is ready for high office.

But, the night before his first appearances on Monday, Politico reported the years-old sexual harassment complaints against him.

Remaining hopeful
Since then, Cain has offered a series of sometimes-conflicting statements over what happened and didn’t happen and what he knew about financial payouts.

He has repeatedly denied he ever harassed anyone but has struggled to remain consistent on the details. He first denied remembering the specifics of the complaints, then offered up some details of an incident in which a woman apparently had trouble with a hand gesture he says he used to compare her height to that of his wife, Gloria. He said in interviews that the details had come back to him during an intense day of questioning.

By Tuesday night, Cain had begun to try to pivot toward Congress and the war for lawmakers’ endorsements that could mean critical on-the-ground support and campaign cash. Romney, who is Cain’s biggest rival in Iowa, has a sophisticated network of surrogates in Congress trying to coax their colleagues into his camp. So far, they’ve rounded up at least 33 endorsements. Cain has none.

The delegation from Cain’s home state, Georgia, helped set up a series of private events intended to introduce Cain around Capitol Hill. — Sapa-AP

As Super Tuesday looms, there are five candidates left in the Democratic race. But the party must ensure it selects someone who will be able to defeat incumbent Donald Trump
Read more
World

President Donald Trump's historic impeachment trial begins in earnest on Tuesday in the Senate, with Democrats calling for his removal from...
Read more
National