Over 340 rhino killed in SA this year, says WWF 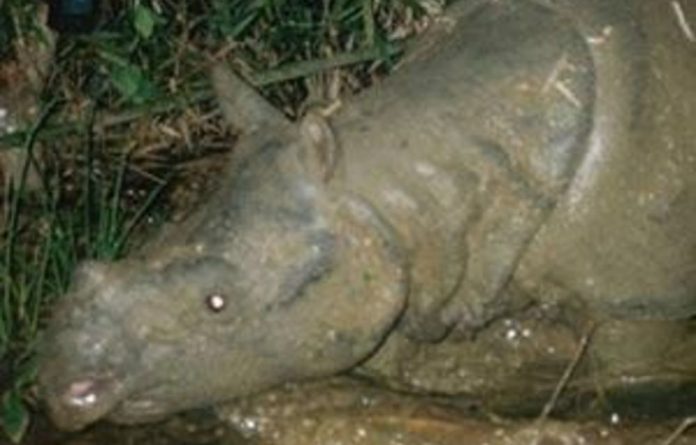 The number of rhinos poached in South Africa has reached a record high, the World Wildlife Fund (WWF) said on Thursday.

“Statistics from South African National Parks show that 341 animals have been lost to poaching so far in 2011, compared to a record total of 333 last year,” the fund said in a statement.

Three of the five rhino species globally were critically endangered.

The last reported poaching took place in the Free State on October 24.

The carcasses of an adult pregnant cow and another younger cow were found at the Sandveld Nature Reserve near Bloemhof.

This was followed by a WWF announcement in the same week that rhinos in Vietnam had gone extinct.

“The carcass of Vietnam’s last Javan rhino was found with a gunshot wound and without its horn.”

Expansion project
There are now fewer than 50 Javan rhinos left globally — all held in one national park in Indonesia.

In an effort to increase South African numbers, 19 black rhinos were successfully moved from the Eastern Cape to Limpopo on Wednesday as part of the WWF black rhino range expansion project.

The week-long transfer was completed on Wednesday. This was the seventh black rhino population established in the country by the WWF.

Close to 120 black rhino have been relocated to date.

“This was possible because of the far-sightedness of the Eastern Cape provincial government who were prepared to become partners in the project for the sake of black rhino conservation in South Africa,” the WWF’s project leader Jacques Flamand said in a statement.

During a meeting of the Convention on International Tade in Endangered Species (Cites) last year, the international community concluded that the increase in poaching was caused largely by demand for horn products in Vietnam.

“The unfounded rumour that rhino horn can cure cancer most likely sealed the fate of the last Javan rhino in Vietnam,” said WWF’s Asian rhino expert doctor A Christy Williams.

“This same problem is now threatening other rhino populations across Africa and South Asia.”

‘Shifting focus’
South Africa has been the focal point of poaching because it has the largest population of rhinos in the world, the WWF said.

“Since armed protection for rhinos in South African national parks is strong, poaching syndicates are likely to shift to countries with weaker enforcement power, including possibly Asian countries that may be caught off guard,” said global species programme director at WWF Carlos Drews.

Despite this, legal loopholes which allowed the export of rhino hunting trophies were being exploited.

In an attempt to restrict the trophy hunting, Environmental Affairs Minister Edna Molewa proposed amendments to the norms and standards governing the practice.

Molewa submitted the suggested amendments for public comment on September 30.

Stricter measures
These covered the norms and standards for marking rhino horn and trophy hunting of white rhino, the department said in a statement early October.

“The proposed amendments are intended to address the abuse of the permit system,” said spokesperson Albi Modise.

“Although illegal hunting is the main threat that could impact on the survival of rhinoceros in the wild in the near future, stricter provisions relating to hunting [are] required.”

In September, a delegation of Vietnamese officials visited South Africa to discuss enhancing law enforcement cooperation between the two countries.

“In order to save rhinos from extinction, the criminal syndicates operating between South Africa and Vietnam must be uncovered and shut down for good.” — Sapa