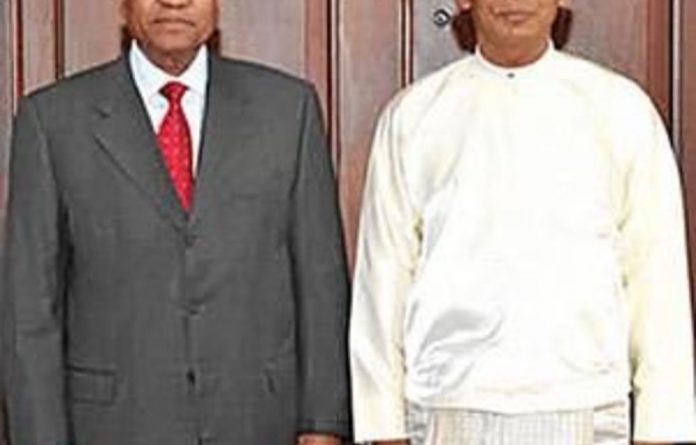 A Mail & Guardian investigation has raised serious concerns about the past life of Burma’s ambassador to South Africa, Myint Naung.

Local and international human rights activists believe there is evidence to suggest that he may be a former brigadier general whose name has been linked to a wave of human rights abuses involving ethnic Karen villagers in the eastern part of Burma and a brutal attack on a Buddhist monastery in Rangoon in 2007 (see “The Karen people” below).

They are calling on the South African government to scrutinise the ambassador’s credentials and, if necessary, expel him.

“With the decades of well-documented atrocities in Karen state, any risk that South Africa could be harbouring war criminals should be taken seriously,” said political analyst Kiru Naidoo. “If there is even a hint of war crimes, an offending ambassador should be marched out of the country.”

In March this year, Burma’s state media reported that Myint Naung had been appointed ambassador to South Africa. In July, he presented his credentials to President Jacob Zuma at a public ceremony at State House.

In August last year, Irrawaddy news magazine, a Burmese exile publication, reported that a Brigadier General Myint Naung was one of several senior military figures who had been transferred to Burma’s ministry of foreign affairs pending their appointment to Burmese embassies abroad.

The report said Myint Naung was based in Karen state and referred to him as the principal of Bayinnaung military academy.

Members of South Africa’s Burmese community, who asked not to be named, said: “It is well known that he is a senior military man. It was confirmed by his officials. Even his father-in-law, who visited South Africa a month ago, was an ex-general.”

One source described a conversation with the ambassador at an embassy reception at which Myint Naung reportedly said that his children’s education had suffered because “he was usually away at shei-dan [the frontline or battle zone]”.

The ambassador’s wife, Swe Swe Thein, has the same name as the wife of the brigadier general and both men are “crazy” about golf.

However, the M&G hit a stumbling block when it tried to obtain a copy of the ambassador’s credentials from South Africa’s department of international relations and co-operation. At the time of going to press, and after repeated requests, the M&G had still not received the requested information or any official explanation of why it could not be provided.

“As far as we can tell, there’s no sensible reason for this,” said Right2Know campaign co-ordinator Murray Hunter.

“You can’t make public information un-public. It’s like trying to put toothpaste back into the tube. It’s just one small example among countless others of how South African officials seem to actively fear information.”

The Burmese embassy in Pretoria was equally reluctant to send a copy of the ambassador’s credentials or to answer questions about his alleged military background.

The embassy also refused a request for a face-to-face interview on the grounds that South Africa is the ambassador’s “first posting” and he would therefore prefer to respond by email.

The M&G sent two sets of questions over an eight-day period but no further response was forthcoming.

If the ambassador is a former brigadier general, it would not come as a surprise to most Burma-watchers, even though the country is allegedly on the “road to democracy”.

“The generals who have ruled Burma for 50 years have simply swopped their camouflages for Calvins. While there has been a recent positive shift in their thinking, free political activity is still not possible,” said Naidoo.

Mark Farmaner, the director of Burma Campaign UK, agreed: “Burma’s government has a civilian face, but the president and most ministers are all recently retired military men and they continue to appoint ex-military figures to key positions, including as ambassadors” he said.

For Farmaner, it is not just a question of Myint Naung’s possible military background but also of the deeper implications if it is proved that he is indeed Brigadier General Myint Naung.

“Any military commander who has served in Karen state could be linked to war crimes and crimes against humanity. The South African government should not be accepting possible war criminals as ambassadors,” Farmaner said.

The M&G has seen documentation compiled by the Karen Human Rights Group detailing a range of human rights abuses carried out by military operation command #4 during the time Brigadier General Myint Naung is believed to have been in charge. It includes many attacks on displaced villagers and the destruction of homes, schools and agriculture.

“We believe that any state receiving diplomats who previously served in the Tatmadaw [Burma army] should make basic inquiries regarding their service history,” said Matt Finch, spokesperson for the human rights group.

“In the case of Brigadier General Myint Naung, publicly available information indicates he may have served as a commanding officer for military operations command #4 during periods when we documented the unit committing serious violations of international humanitarian law in rural eastern Burma.”

Independent Burmese media — including a journalist who reported secretly from inside the country — also claim that Brigadier General Myint Naung was also behind a brutal attack on Buddhist monks at Ngwe Kyar Yan monastery in 2007.

The attack, they say, was part of the military regime’s crackdown on peaceful protesters after the Saffron Revolution, in which hundreds of thousands of monks and civilians marched through Burma’s cities to demand democratic change.

Following the 2007 crackdown, the Australian government rejected an army general the Burmese authorities had appointed as ambassador to Canberra.

“We made it clear to the Burmese that under no circumstances were we going to have somebody from their military regime as an ambassador here in Australia,” Reuters quoted Foreign Minister Alexander Downer as saying.

Burma’s exiled prime minister, Sein Win, who is a cousin of Burmese Nobel peace laureate Aung San Suu Kyi, told the M&G that he supported Australia’s decision. But he stopped short of asking South Africa to follow suit because “it would be undiplomatic”.

“We wish that each government [would] make such a move on its own without us requesting it,” he said.

Naidoo isn’t confident that this will happen. He described South Africa’s policy on Burma as “a maze of confusion”, pointing out that “South African support gives the generals the legitimacy they desperately crave”.

“Surely the land of Mandela, Tambo and Biko should be more discerning about its friends,” he said.

The Karen people live in south-east Burma, along the Thai border, and are the country’s second-largest ethnic group.

Their struggle for independence started in the 1940s, while Burma was still under British colonial rule.

The Karen National Liberation Army and other groups have fought the Burmese government since 1949 in the world’s longest-running civil war.

Organisations including the United Nations, Human Rights Watch (HRW) and the Karen Human Rights Group have documented human rights abuses in Karen state for many years.

Their reports speak of forced labour, sexual assault, the destruction of villages and agriculture, recruitment of child soldiers, summary execution, and the use of civilians as “human mine-sweepers”.

Their documentation shows that the vast majority of these abuses have been perpetrated by the Burmese military.

Thai-Burma border relief organisations estimate that nearly half a million Karen have been internally displaced, and another 160 000 live in refugee camps in Thailand.

HRW’s Asia director, Brad Adams, says: “While the world has rightly condemned the treatment of Aung San Suu Kyi and the lack of democracy, it needs also to focus on the Burmese army’s brutal displacement of the Karen and other ethnic minorities.” — Marina Simpson & Lionel Faull

Q&A Sessions: ‘Keeping quiet is not an option’ — Charlotte Lobe