There’s a Spoek on my stoep 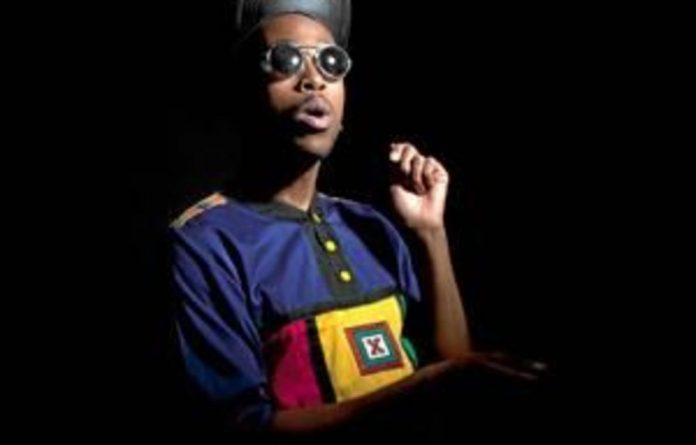 Some would argue Die Antwoord cleared the path for acts like Mathambo. Nevertheless, he has emerged, arguably, as South Africa’s pre-eminent music export for the year.

This year, he performed at the United Kingdom’s premier arts event, the Glastonbury Festival; he was signed by Subpop, the home of acts like Nirvana and Soundgarden; he performed at the Lincoln Centre in New York; and one of his tracks, Put Some Red on It, has been remixed by American rap group Shabazz Palaces.

A futuristic alloy
But what genre does he work in? A few months ago, Mathambo (born Nthato Mokgata) reacted furiously when a Guardian writer described him as the king of kwaito.

His sound is a futuristic alloy of funk, hip-hop, kwaito, electro and dub-step. As his music lies far left (or perhaps far right) of what is quintessentially South African, critics don’t know how to categorise it.

Mathambo was born in 1985 in Soweto into the state of emergency. The rapper, whose family moved from Soweto to Sandown in the mid 1990s, remembers growing up terrified. It was a terror he didn’t notice in the “white kids I hung out with”.

During the state of emergency and the interparty violence that followed in the 1990s, roadblocks were erected all over townships. Soldiers and cops patrolled the streets, hippos (armoured trucks) roamed, maintaining a brittle quiet.
“We had a fear of Inkatha hacking us to pieces,” Mathambo said. Then there was Aids.

The fear of this pandemic is referenced in She Lost ­Control, his collaborative project with photographer Pieter Hugo. In it, Mathambo is dressed in an Antarctic-white suit, white gloves, holding a white loudhailer, in a cemetery. The gothic ambience conjured up by its surroundings references the fear that stalks the land.

Mathambo went to school at St John’s College in Johannesburg. “Moving from Soweto to here was a big change,” he said from the palatial family home in Sandown.

Suburban isolation
From a vibrant neighbourhood in which he saw his neighbours and friends every day, he suddenly had to live in what he called “isolation”.

On occasion, to while away the time, he “sat [alone] with a dictionary”, probably the roots of his interest in creative writing.

Mathambo’s privileged upbringing is the kind that induces in some an indifference and oblivion about the working class and its concerns.

“Modernism suffers from elitism,” Charles Jencks argued in the Language of Postmodern Architecture. Mathambo is, in a sense, a postmodern child in the way (in the words of Jencks) he has reached out “towards the vernacular, towards tradition and the commercial slang of the street”.

His choice of stage name — it comes from Emzini Wezinsizwa, a popular local television show — and other cultural references rip off what is quintessentially South African. But it’s not just a case of inward looking; his antennae are attuned to the trends in Europe and North America.

Hanging on to the vernacular
“For a long time I didn’t know who I was and what I was doing, but through this music I know what I should do and what I can do,” he said.

For someone who is married to a Croatian, who lives in Malmo, ­Sweden, and who is always on the road (or on the plane), it’s easy to lose the textures of the vernacular (isiZulu and Sesotho), but he makes a conscious effort to keep in touch, including reading isiZulu aloud and listening to South African music.

“Absence makes the heart grow fonder,” he said. “The more I am away from home, the more I appreciate things about home. I can listen to Phuzekemisi — getting immersed in the music”.

The result is Mshini Wam, his debut album. His label, Subpop, described his debut as a “unique take on electronic music that infuses futurism with a strong sense of pride in where he comes from. This is clearly African music, but not what you might expect from that title.”

Hilton “Roach” Roth, a Cape Town-based guru of electro music, described Mathambo’s sound as being “something beyond genre, too far left to be played on South African radio”.

Deconstructing the sound
A variety of words come to mind to describe the sound on this CD — mutant, fugitive, conscious. The sound is spacey, the ambience it creates is striated, its sensibility offbeat and its import is that it is the sound of the future and a cheeky comment on the present.

Mathambo’s Derridaesque interest in the sound originates in his child­hood. “I remember being four or something, recording music with my brother, trying to stop parts, deconstructing what makes music what it is,” Mathambo said.

He started rapping from a young age, a habit that must have been enhanced by his precocious writing habit. In fact, right up to the time he enrolled for medicine at the University of Cape Town, Mathambo said he was “interested in creative writing” but didn’t see it as something he “could pursue as a career”.

But he has done enough to be considered a writer, including editing a hip-hop fanzine and producing the kind of poetry that is now widely heard.

While in Cape Town at medical school, a programme he would eventually drop out from to study graphic design, he “was doing more music, more writing”. That was when he started working with Jones, producer Simon Ringrose (also known as Sibot) and electro musician Markus Wormstorm. The Mshini Wam Band includes Nicholas van Reenen on guitar, Jake Lipman on drums and Richard Rumney on electronics.

Mathambo’s influences have been diverse. “I wanted to be as good as the British, the Europeans and the Americans, but coming back from touring the world, I realised that what we have been making is phenomenal.”

Back to basics
Perhaps that is why, in his forthcoming release, he goes back into South Africa’s music trove.

He and his band are redoing old classics by Letta Mbuli, Brenda Fassie, Caiphus Semenya, maskandi legend Phuzekemisi and others. It’s also about “tapping more into myself as Nthato Mokgata, who grew up in Rockville and who heard these songs as part of my experience”.

He played some of the tracks for me. They are moody and atmospheric, not slavish renditions. On this project, he worked with producers Ayanda Sithole and Theo Tuge.

He got his musical bearings from his brother, 10 years older than him. This meant that by the time he was five, he could “tell Ice Cube from Ice T”. Kwaito was the soundtrack of the 1990s and, even though he didn’t like it much, he knew what was going on. “You couldn’t hide from kwaito,” Mathambo said.

When he was 14, he felt drawn to jazz (it probably helped that trombonist Jonas Gwangwa is his uncle). He immersed himself in the Blue Notes — Kippie Moeketsi and Abdullah Ibrahim — and it is the latter he dwells on. Mathambo commented on the “mystical, metaphysical, kind of worldly sound” conjured up by the pianist and composer.

At about this time, one of his father’s friends relocated to Cape Town and bequeathed his extensive library to Mathambo’s family. So he read fiction, tomes on politics (Malcolm X’s speeches, for instance) and religion. In fact, when he was 11, he even thought of converting to Islam.

But like most other teenagers, he was also listening to hip-hop and messing with his cousin’s computer.

Mshini Wam, in part, deals with the despondency you sometimes feel when you listen to talk radio or read the newspapers. And if the CD has a message, it’s perhaps contained in the song: Don’t Be Scared (Gwababa).

“There are a lot of people who can’t and won’t go to another country. [South Africa] is their country,” Mathambo said.

Although Mathambo spends months in Europe, you get the sense that this is also his country, never far away from his mind and sound.

Mshini Wam is available from Aware Records and CDs at Shop No 5, 70 Juta Street, Braamfontein, Johannesburg