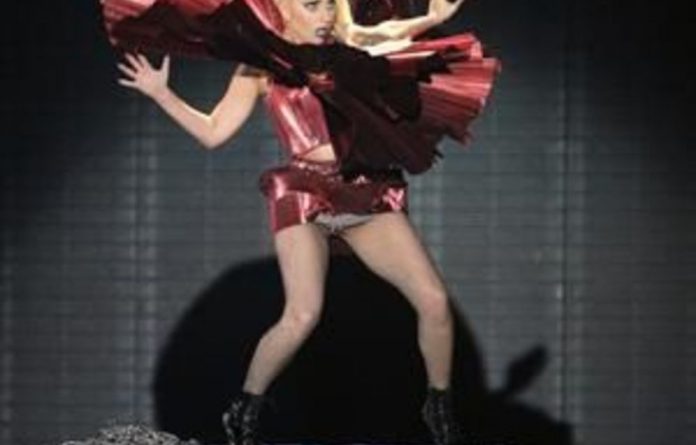 Lady Gaga stole the show at the MTV Europe Music Awards in Belfast on Sunday, scooping four prizes and going one better than 2010 when she also led the field with three.

The flamboyant 25-year-old New Yorker won best female, best song and video for her hit single Born This Way as well as the biggest fans award.

“I knew that this song was very special when I wrote it and I just didn’t know when I first started out … how special you would all be to me,” a tearful Gaga told a packed, boisterous Odyssey Arena as she accepted the best song award.

Canadian teen sensation Justin Bieber was among the other multiple winners, picking up best pop act and top male singer.

“A lot of crap”
Much of the attention in the run-up to the awards has been on the 17-year-old, who has denied allegations made by a U.S. woman that he fathered her child when he was 16.

Accepting the second of his awards, he said: “There’s been a lot of crap talked about me lately, but I’ve pulled through!” according to MTV.

Bieber’s girlfriend Selena Gomez, an actress and singer, hosted the MTV event, and the pair were photographed out the previous night in the city in a public show of togetherness.

She also told Katy Perry during the show “I think he’s cute!”

Los Angeles rockers Thirty Seconds to Mars won two awards — best alternative act and best world stage — as did Bruno Mars, honoured as the best new act and “push” artist who was promoted by MTV as an up-and-coming talent.

Birth of MTV
Brian May and Roger Taylor of Queen accepted the previously announced Global Icon prize. “We were there at the birth of MTV,” May said.

“How wonderful for us to be here 40 years later … and here in Belfast which is finally showing its beauty and setting an example to the world by finding, out of grief and tragedy, the beginnings of truth and peace.”

British rockers Coldplay kicked off one of the biggest nights of pop music outside the United States with Every Teardrop Is a Waterfall from their new album Mylo Xyloto.

LMFAO performed Party Rock Anthem, a high octane disco hit that brought over 20 dancers to the stage where they strutted under tinsel “snow” that fell from the roof.

Red Hot Chili Pepper and Northern Irish favourites Snow Patrol played at other venues around Belfast, while Bieber earned the loudest screams when he sung his new track Under the Mistletoe followed by Never Say Never.

Lady Gaga sang Marry the Night from the top of a giant moon structure, and presenter and actress Hayden Panettiere was joined on stage by a naked man in a scripted appearance.

There was also a video tribute to late singer Amy Winehouse, who died in July aged 27.

The event closed with a medley of Queen hits including The Show Must Go On and We Will Rock You.

Belfast had been overtaken by “Biebermania” ahead of the show with hundreds of girls camped outside his hotel to catch the briefest glimpse of their idol.

“He’s beautiful, he’s like an angel,” said Aya Lawlor, a 14-year-old Belfast girl who stood for hours on a cold Saturday night just to see Bieber. “He’s proven that anyone can do it.”

Thousands watched the main concert and other performances in the open and in smaller venues around Belfast, and millions tuned in around the world to see it via live stream on the web.

The awards are generally dominated by US acts even though they are held in a different European city each year. — Reuters

Sochi Olympics kick off with a glitch before fairy tale show