Papandreou out as coalition gathers to put out Greek fires 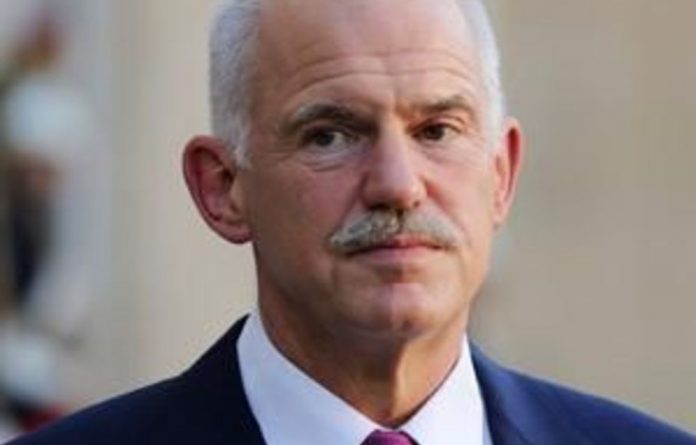 The Greek prime minister and opposition have agreed on the formation of a new coalition government in a bid to break the political deadlock and pave the way for an EU bailout for the debt-stricken country.

Prime Minister George Papandreou and opposition leader Antonis Samaras battled over the weekend to strike the deal — which will see a new leader appointed to take over from Papandreou — ahead of the opening of the global financial markets this morning.

A statement from the Greek presidency said the leaders will meet again on Monday to discuss who would head the coalition government, with elections tentatively scheduled for February.

The stricken eurozone member will name its new leader and cabinet by the end of Monday after talks between outgoing Prime Minister George Papandreou and conservative opposition leader Antonis Samaras, a government spokesperson said.

A historic power-sharing deal was reached in dramatic late-night talks on Sunday after Papandreou agreed to step down, removing a key stumbling block hours before jittery financial markets reopened.

The two main parties agreed on February 19 as the “most appropriate” date for early elections demanded by Samaras in exchange for his party’s backing a European plan to save the country from bankruptcy.

News of the Greek unity deal, which came after a G20 summit, briefly lifted the euro above $1.38 in early Asian trade Monday. But the single currency quickly lost steam to $1.3766, down from $1.3788 in New York late Friday.

Trading on Asian stock markets was cautious, with Tokyo’s Nikkei index down 0.55% in the morning and Hong Kong flat.

The Greek accord came just ahead of a eurozone finance ministers’ meeting on Monday over whether to release an €8-billion slice of bailout funds that the government says is needed by December 15 to keep the country afloat.

The Greek president’s office said in a statement: “An agreement was reached to form a new government to immediately lead the country to elections after ratifying the decisions taken by the European Council [at the EU summit last month].”

An earlier bid to include smaller parties in negotiations foundered after Communists and the leftist Syriza party declined to attend proposed talks.

Avgi, the Syriza party newspaper, decried a “cooked-up deal to save the memorandum”. That referred to the loan agreement in 2010 between Greece and the EU, the International Monetary Fund and the European Central Bank requiring two years of tough austerity.

Senior economic officials from the government and the opposition conservatives were to hold follow-up talks early on Monday ahead of the eurozone meeting in Brussels, the semi-state Athens News Agency said.

European leaders have become increasingly frustrated at the political impasse in Athens at a time when they want to press ahead with hard-won agreements reached in late October on tackling the eurozone debt crisis.

Despite the historic deal, there will likely be no let-up in the pressure on Athens to implement stinging austerity measures in return for the cash payment, available under the first May 2010 Greek bailout package.

The new government will be tasked with implementing the October EU bailout deal, which calls for further harsh austerity measures in Greece, already at breaking point with its economy shrinking and unemployment rising fast.

The latest turmoil began with Papandreou’s shock announcement a week ago that Greece would hold a referendum on the terms of the bailout.

The move stunned fellow European leaders, sent global markets into a tailspin and earned him a humiliating dressing-down prior to a G20 summit in France. Papandreou hastily retracted the proposal.

Polls published in Sunday newspapers showed Greeks largely in favour of a unity government and also wanting to keep the euro. But some Greeks appear to have had enough of their squabbling leaders.

“Papandreou. Samaras. They are all the same,” said Takis Karalambos, as he sipped a coffee outside a market in Athens.

The Guardian newspaper in Britain reported on Monday morning that four candidates were reportedly being considered for the post of prime minister, including Petros Molyviatos, a former conservative foreign minister, and Loukas Papademou, the erstwhile vice-president of the European Central Bank. — Sapa-AFP

Just over a year ago, veteran radio presenter Xolani Gwala’s cancer was in remission. He spoke to the Mail & Guardian once he was back on air.
Read more
World