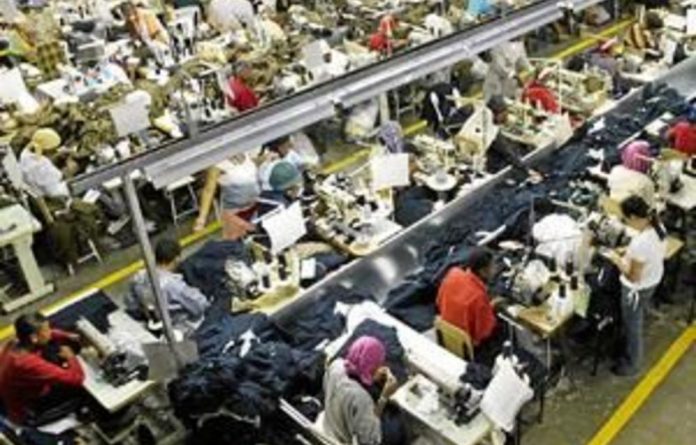 There is good reason to try to keep the South African textile and clothing industry going because it could create many more jobs, raise skills levels and eventually pay better than survival wages.

But there are lessons to be learned from Lesotho and Mauritius, whose clothing industries have grown in recent years — in sharp contrast to the steep decline in the South African industry.

A major difference between South Africa, on the one hand, and Lesotho and Mauritius, on the other, is that piecework and productivity incentives, outlawed in South Africa, are allowed.

Currently, about half of the South African industry is under threat — the half that steadfastly has not complied with wage rates set by the bargaining council. The bargaining council system forces non-signatory companies to implement union-employer negotiated wage and other agreements, which they say are too high for them to be viable.

After years of conflict between the bargaining council/union and noncompliant employers, the industry is heading for high noon — writs are going to be executed soon, which could result in the closure of up to 470 non-compliant factories within the next six months, resulting in 18 000 to 28 000 job losses.

The South African Clothing and Textile Workers’ Union (Sactwu) has drawn up a comprehensive industrial strategy, which it hopes will revive employment and prospects for compliant companies. But many manufacturers believe the union’s overall policies have been a prime cause of job losses.

But the Sactwu/bargaining council stewardship of the industry has coincided with a steep decline in total employment in recent years — from perhaps 200 000 about eight years ago to 56 000 at present, according to the estimates of some manufacturers.

In the same period, neighbouring Lesotho and Mauritius have not shed labour but added jobs.

Botshabelo
I visited Botshabelo, about midway between Bloemfontein and Lesotho, to see whether the industry there is in as uncertain a state as it is at the hot pot of Newcastle.

In Botshabelo (and Lesotho), I found manufacturers’ managers unwilling to speak, and then often only on condition of anonymity. They said they were afraid of victimisation by the union and by South Africa retailers, the buyers of their products.

The owner of one of the few remaining clothing factories in Botshabelo, Jaffer Nooroodien, was an exception. The apartheid government’s incentives for creating jobs were more sane, Nooroodien said.

Botshabelo/Thaba Nchu were, in those days, thriving manufacturing centres. “Every factory in Botshabelo industrial area was filled with manufacturers — not just garment manufacturers but also manufacturers of teaspoons, shoes, cosmetics, jewellery, textiles and fabrics. The government offered six years of incentives, which were much easier to access than subsidies are today. Now almost all the factories are empty — it is a ghost town.”

Compared with about 55 clothing and textile factories at its peak, about 10 factories remain in Botshabelo/Thaba Nchu today, employing fewer than 1 000 people.

Nooroodien, who has been here for 19 years, said his factory was no longer profitable and government intervention was needed, particularly to reduce illegal imports.

Although he had had “sympathetic audiences” with government officials, no assistance had materialised, he said.

But even worse, recently, because of ongoing instability in the sector — particularly the high rate of closure of factories both voluntarily and by the bargaining council — big South African clothing retailers had lost confidence in the local cut, make and trim (CMT) factories like his.

“In a number of cases, customers had to take legal action to retrieve their materials from factories that were closed by bargaining council writs.”

A buyer for a fashion house confirmed this — he said he spent weeks in 2010 on court cases retrieving materials from factories being closed in Botshabelo.

Nooroodien said that, as a result of the loss of confidence, his factory, which was working at 100% of capacity a year ago, was today working at 80%. He said his factory was currently “compliant” but he would, on current order levels, be un-able to pay the higher bargaining council wage rates that would apply from January 2012.

Most of the other former clothing factory owners in the area have not had his stamina — they have auctioned off their machinery and disappeared. Some have switched to importing clothing, legally or otherwise. An estimated 80% of clothing sold in South Africa currently is imported.

Lesotho
By contrast, in Lesotho the industry appears to be healthy. There are about 40 factories in Maseru and 15 factories in Maputswe. Factories there normally employ 400 to 1 500 workers, which means that the Lesotho clothing industry could be almost as big as the South African industry in employee numbers.

A major factor in the initial investment by big foreign companies into the Lesotho industry has been the United States’s Africa Growth and Opportunities Act (Agoa), which allows developing countries to export products tariff-free to the US. Agoa is not available to South Africa.

But several managers said that Agoa accounted for only a small, higher-margin slice of the factories’ turnovers. Most of them primarily supplied the retail industry in South Africa, filling in for the declining South African industry.

They are doing well out of this because of relative stability in the Lesotho industry and because of lower wages in Lesotho than in South Africa. One manager said there was a noticeable move to Lesotho by former South African operators in the past year.

Satisfying the growing demand for shorter lead times and “instant fashion”, Lesotho manufacturers can offer some competition to overseas imports. Agoa exports and the supply to South African clothing retailers mean that these factories are inspected for labour conditions. They are not sweatshops but they are definitely low-wage.

One manager says: “Most of all, the people are willing to work, although their skills levels are generally much lower than in South Africa. The unions are here and are gaining popularity because the workers are naturally attracted by their message — who wouldn’t be? But the government understands the economics of the industry and helps to limit union and worker expectations.”

Although skill levels are low, productivity increases have been achieved by some companies through training. Importantly, productivity/piecework incentives are allowed.

Mauritius
Mauritius is well known for its export processing zone (EPZ), which was introduced in the early 1970s following independence in 1968.

Clothing companies have always dominated the EPZ and they have been the main factor in reducing Mauritius’s unemployment from 25% in 1983 (about the current official South African level) to zero in 1990 — and since then Mauritius has imported foreign guest workers. For years, Mauritius was the largest exporter of knitwear in the world. Today the EPZ is undergoing big restructuring and some clothing and textile factories are closing as producers turn to more profitable management and production policies. High-tech spinning mills are being set up and, faced with increasing competition from mass-production clothing countries such as China, the industry is specialising in short lead times and flexible production.

Goreeba said the clothing industry had a big effect on Mauritian society. “Previously, only the men in the family worked, often in the fields, and the women stayed at home. The factories modernised society because women went to work, contributing to household income and raising prosperity levels generally.”

The industry was started to produce cheaper clothing for sale into surrounding Indian Ocean and African markets. But it had progressed to producing higher-end products for sale mainly in Europe and the US.

Ken Poonoosamy, managing director of Mauritius’s Board of Investment, said that the industry had recently benefited from vertical integration — for instance, it had expanded into yarn spinning, even though none of the raw materials originated in Mauritius. And many factories were no longer low-wage but medium-wage, he said.

Despite strong unions in Mauritius, its legal minimum wage has been, and still is, low. But, Goreeba said, “the low minimum wage is irrelevant in the clothing industry because all workers are piece-rated. No one works for the minimum wage — normally, there are daily targets and everyone aims for the incentives paid for producing more than target.”

There are differences between South Africa and Mauritius. For instance, South Africa will never benefit from Agoa, whereas Mauritius, like Lesotho, does.

But the largest difference is probably that Mauritius and Lesotho allow productivity/piecework incentives for workers. In South Africa, Sactwu has steadfastly refused to allow incentive schemes. Without allowing incentives, the South African industry is likely to become much smaller and produce mainly for high-margin niches.