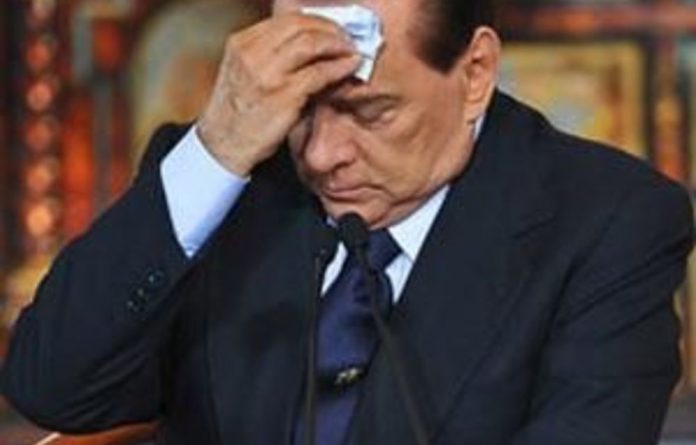 Berlusconi won a crunch parliamentary vote on budget policy because the centre-left opposition abstained. But he secured only 308 votes in the 630-seat chamber of deputies, indicating he no longer had a majority.

“I ask you, Mr Prime Minister, with all my strength, to finally take account of the situation … and resign,” opposition Democratic Party leader Pier Luigi Bersani said.

Stock markets across Europe rose on the news , showing investors regard the departure of the 75-year-old billionaire media magnate, beset by corruption trials and sex scandals, as a precondition for saving Italy’s public finances.

Berlusconi’s closest coalition ally, Umberto Bossi, head of the populist Northern League, had earlier urged him to resign in what could be a mortal blow, saying he should make way for Angelino Alfano, secretary of the premier’s PDL party.

Italy has displaced Greece as the epicentre of the euro zone’s sovereign debt crisis, with government bond yields nearing unsustainable levels that could force the bloc’s third largest economy to seek a bailout that Europe cannot afford.

Italian 10-year bond yields touched a new record of 6.71% on Tuesday, raising the risk that Rome’s massive debt — the second highest in Europe at 120 percent of gross domestic product — could spiral out of control.

“Now we are really reaching very dangerous levels … We are above yield levels in the 10-year where Portugal and Greece and Ireland issued their last bonds,” said Alessandro Giansanti, a rate strategist at ING.

In Greece, the ruling Socialists and the conservative opposition were putting finishing touches to a national unity government expected to be headed by former European Central Bank vice-president Lucas Papapdemos, a socialist source said.

Prime Minister George Papandreou, who was forced to request the euro zone’s first EU/IMF bailout after discovering on taking office two years ago that the true scale of the deficit had been concealed, asked ministers to prepare resignation letters to submit to the president.

“Negotiations are being finalised with Papademos as PM,” a socialist party source with knowledge of the talks told Reuters.

Papandreou, son and grandson of prime ministers, said farewell to his Cabinet at the meeting, a participant said.

Distress signals
Eurozone finance ministers, meeting in Brussels, agreed on Monday on a roadmap for boosting the 17-nation currency bloc’s €440-billion rescue fund to shield larger economies like Italy and Spain from a possible Greek default.

But with bond investors increasingly on strike, there are doubts about the efficacy of those complex leveraging plans.

Countries outside the euro area kept up a chorus of pressure for more decisive action to stop the crisis spreading.

“The eurozone needs to show the world it can stand behind its currency, it cannot just wait on developments in Athens and in Rome,” British Finance Minister George Osborne said.

Swedish Finance Minister Anders Borg added: “Europe is running dry on credibility and a solution to a high debt crisis must be lower debt. The responsibility for that falls with the country with high debt and that is obviously Greece and Italy.”

Distress signals from the bond market and the European Central Bank showed the crisis is gathering pace alarmingly.

Shifts in the Italian yield curve and a widening gap between the prices bondholders demand for Italian debt and what potential buyers are prepared to pay are flashing warning signs similar to those seen in Portugal, Greece and Ireland before high borrowing costs froze them out of debt markets.

In a sign that they are increasingly cut out of money markets, the ECB reported Italian banks needed €111.3-billion in central bank funding in October, up from €104.7-billion in September and a mere €41.3-billion in June.

EFSF head Klaus Regling cited a “very difficult” market climate and uncertainty about the fund’s future profile as factors in the weak demand.

Finnish Prime Minister Jyrki Katainen, facing growing hostility in his country to bailouts for eurozone weaklings, said Italy was to big to be rescued.

“It is difficult to see that we in Europe would have resources to take a country of the size of Italy into bailout programmes,” he told Parliament.

Interim administration
In Athens, negotiations over forming an interim administration to save Greece from bankruptcy by enacting a second international bailout plan before early elections, after Papandreou agreed to step down, edged towards resolution.

The aim is to establish a “100-day” government to push the €130-billion bailout, including a “voluntary” 50% writedown on Greece’s debt to private sector bondholders, through Parliament by February.

In Brussels, the 27 European Union finance ministers debated how to strengthen shaky banks to cope with the sovereign debt shock without halting lending to the “real economy”.

Options on the table included offering state guarantees to borrower banks or injecting cash into the European Investment Bank, the EU’s project finance arm, so that it can lend them more.

A bank recapitalisation agreed at last month’s EU summit will cost about €100-billion, the European Banking Authority (EBA) said, and some countries wanted a more flexible definition of capital to reduce the overall cost. — Reuters