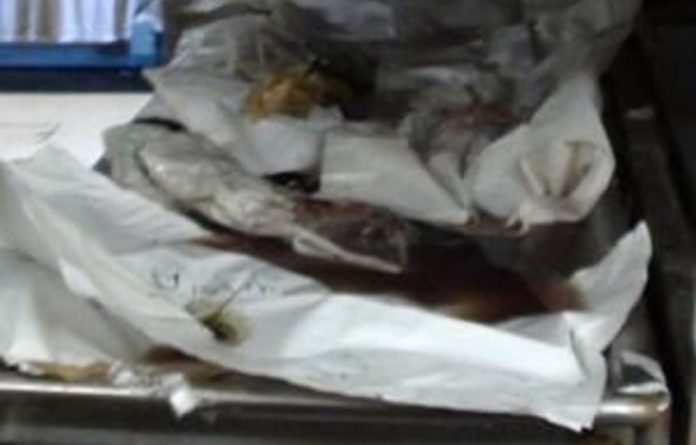 But the Democratic Alliance and hospital employees say the the mortuary is plagued by management issues.

A number of corpses have been awaiting burial in the hospital’s mortuary for several months — some as far back as August.

Many of the corpses exhibited advanced stages of decomposition and freezer burn, while others were bloated and leaking bodily fluids and exuding a sharp stench.

In response to questions posed by the M&G, department spokesperson Simon Zwane said the department is aware of the problem.

“We are aware of unclaimed bodies at the hospital. They relate mainly to babies that have not been claimed by their parents. The hospital has a responsibility to trace the next of kin before deciding what to do with the bodies. Usually hospitals are allowed three months to trace relatives before deciding on burying the bodies as paupers,” Zwane said via SMS.

The response is in conflict with documents in possession of the M&G, proving that adult cadavers are among those await interment at the hospital’s mortuary.

‘Highly irregular’
According to morgue employees, most of the corpses held in the morgue were awaiting pauper’s funerals — which are the responsibility of the state if indigent people cannot be buried by their families.

In cases where families cannot afford a funeral, an application must be made to a municipality for an indigent burial.

While there is no stipulated, regulatory time frame in which bodies must be removed from hospital morgues for indigent or pauper’s burials, the M&G spoke to two separate medical academics who described the period the corpses had been kept at the morgue as “highly irregular”.

“Each municipality must have a contract with an undertaker who will perform indigent and pauper burials after a period of harbouring the body. Often you’ll find that procedures have been flouted and bodies are left to wait, but it’s not necessarily all due to negligence,” said one of the academics, who preferred to remain anonymous.

“This is an appalling situation. At a hospital mortuary, bodies should be kept for no longer than a few days. The change of management at this mortuary has led to this issue and it should be dealt with immediately,” he told the M&G.

Mortuary workers told the M&G that conditions at the morgue have deteriorated since the appointment of Toko Pitsoane as mortuary manager in July.

“We complained but were told by morgue management to draft a report. We did that and nothing happened. Why must we work like this?” said the mortuary employee.

Pitsoane would not respond to questions when called by the M&G, instead referring all queries to the national department of health.

“I won’t talk to you over the phone and I can’t comment,” Pitsoane said before ending the call.

Morgue employees have also complained of a lack of protective gear such as masks and gloves when dealing with corpses.

According to the Occupational Health and Safety Act, all people working in mortuaries must have access to gloves and surgical masks.

Those working in close proximity to corpses are at risk of contracting infectious diseases such as hepatitis and tuberculosis, unless correct precautions are taken with protective gear.

Hospital management would not comment on the allegations and referred all queries to the provincial health department, who did not respond to questions on this matter.

The country is among the G20 countries who have invested in electricity produced from coal, oil and gas at the cost of addressing climate change
Read more
Advertising
Continue to the category
National