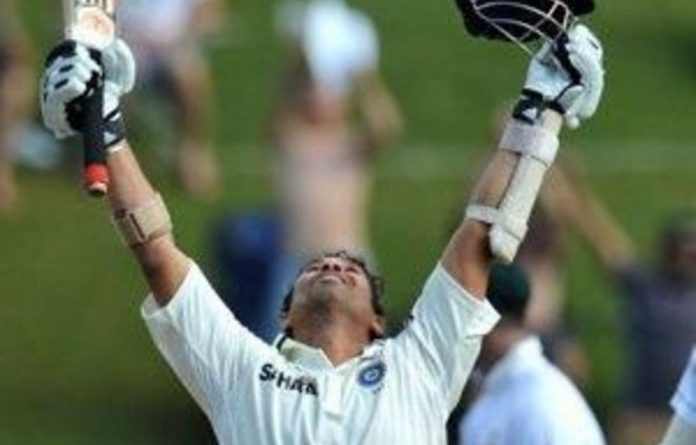 India’s Sachin Tendulkar added another record to his impressive collection when he became the first batsman to score 15 000 Test runs on Tuesday in the first Test against West Indies.

Playing his 182nd Test, the 38-year-old pushed a Devendra Bishoo delivery to extra cover for a single to reach the milestone on day three at the Feroz Shah Kotla Stadium.

Tendulkar took off his helmet, raised the bat and looked skywards with a silent prayer that has been his characteristic celebration after notching up each of the major batting records dotting his illustrious two-decade career.

His batting partner Rahul Dravid, next to him in the highest Test run-scorers list with 12 859 runs, came to congratulate him, as did the West Indian players.

The sparse crowd joined Tendulkar’s teammates in the dressing room to clap and congratulate the batting great.

Most of them will return on Wednesday hoping for a perfect day that could end with Tendulkar’s much-awaited 100th international century guiding India to victory, which is still 124 runs away.

Tendulkar has scored 51 centuries in test cricket and 48 in 453 one-day internationals.

Anticipation of Tendulkar’s 100th century has provided a buzz of excitement around India’s low-profile three-match series against West Indies and the team has celebration plans once he reaches the mark.

“It’s a milestone Sachin will achieve, whether in this game, the next game or some other game. It’s bound to happen … Once he gets his ton, we all will celebrate with him. It will be a big moment for Indian cricket,” Dhoni added. — Reuters