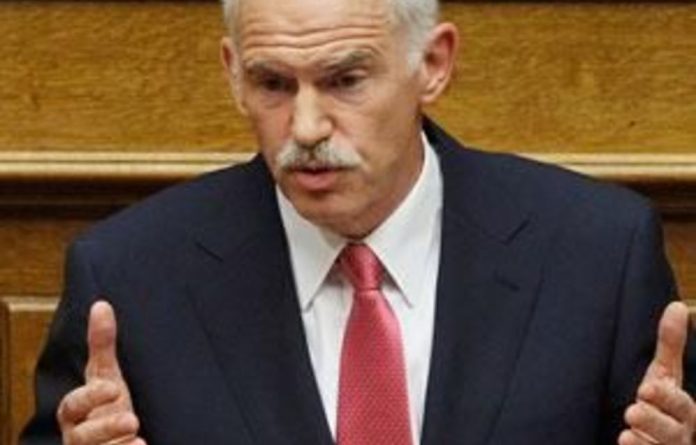 Greek politicians were poised to begin a fourth day of talks to name a new premier on Thursday as anger grew domestically and abroad with the debt-wracked country that is flirting dangerously with bankruptcy.

Greece President Carolos Papoulias was due to reopen talks with political leaders on a crisis team to implement the terms of an EU bailout deal to maintain the country in the euro and keep it solvent, with reserves running out in weeks.

The meeting was scheduled for 10am (8am GMT) but such gatherings have frequently overrun or even been cancelled altogether as political chaos reigns.

As Greece raced to find a new leader, officials in Rome said Italy’s Parliament will pass key reforms by Sunday in a bid to halt market mayhem, after which Prime Minister Silvio Berlusconi will step down and talks on a new government will start.

The news came as the country’s borrowing rates soared above 7% on Wednesday, levels that could make it impossible for Rome to keep servicing its €1.9-trillion ($2.6-trillion) debt, a spike that rattled financial markets around the world.

No agreement
In Athens the media kept up a stream of frenzied speculation on who was likely to be named to head the emergency government, backed by the socialists of outgoing Prime Minister George Papandreou and opposition conservatives.

On a day that was chaotic and confused even by recent Greek political standards, a deal seemed to have been clinched late on Wednesday on appointing the country’s parliamentary head — Philippos Petsalnikos, a German-educated lawyer.

In an emotional televised farewell address to the nation, Papandreou even wished his eventual successor well as he stepped aside and headed to the presidential place to tie up the loose ends.

But it turned out he had no successor to hand over to, as talks dramatically broke down in acrimony with a third political leader, far-right chief George Karatzaferis, storming out and complaining bitterly to waiting reporters.

With Greece’s politicians apparently unable to agree on Petsalnikos, speculation focused again on Lucas Papademos, a former deputy head of the European Central Bank, whose star had faded throughout the day.

The 64-year-old former central banker has the advantage of an enviable reputation in international financial circles but apparently made unacceptable demands, for example asking for elections to be delayed.

Others rumoured in the media were Vassileios Skouris (63) president of the European Court of Justice, and European ombudsman Nikiforos Diamantouros (69).

Former finance minister Panagiotis Roumeliotis (64) who represents Greece at the International Monetary Fund, has also been mentioned as a possible candidate for the poisoned chalice of a job.

The last days of Pompeii
Meanwhile, media and other politicians finally lost patience with their squabbling leaders.

Leftist Syriza leader Alexis Tsipras said: “What we are witnessing looks like the last days of Pompeii. Elections are needed right now.”

Summing up the frustration of a nation, the leading Ta Nea wrote in its online edition: “Shipwreck at the presidential palace.”

Whoever finally wins the job faces a mountainous to-do list.

His first job will be to persuade the EU and International Monetary Fund to disburse an €8-billion ($11-billion) slice of aid from a 2010 bailout deal that is desperately needed by December 15 before the coffers run dry.

Then he must force through painful austerity measures exacted as the price for a second EU bailout package which gives Athens €100-billion in loans, the same amount in debt reduction and a further €30-billion in guarantees.

Drawing a firm line in the sand, crisis-weary France and Germany last week gave Athens a stark choice: pass these belt-tightening measures or leave the euro.

The new premier must also bring together Greece’s warring politicians for a unity administration in a country used to adversarial politics — combat rather than compromise — ahead of elections provisionally set for February.

‘The world will not wait’
An early sign of trouble was opposition leader Antonis Samaras’s refusal to sign an agreement promising to implement austerity measures, as demanded by the EU, saying it offended Greece’s dignity.

Late on Wednesday Samaras denied he was the one holding up progress.

“My problem does not lie with particular people. My problem is to unblock the sixth tranche and the bailout deal, for the country to have a government, so we can reach elections where the people can speak,” he told reporters.

Polls show that Samaras’s New Democracy party is about 10 points ahead of the socialist Pasok party, which will have to find a new leader for the election campaign.

With Greece’s troubles adding to the headache for EU leaders who already have their hands more than full with political instability in Italy and record bond yields, Germany’s leader urged Europe to put its money where its mouth is.

“The world will not wait for Europe.” –AFP