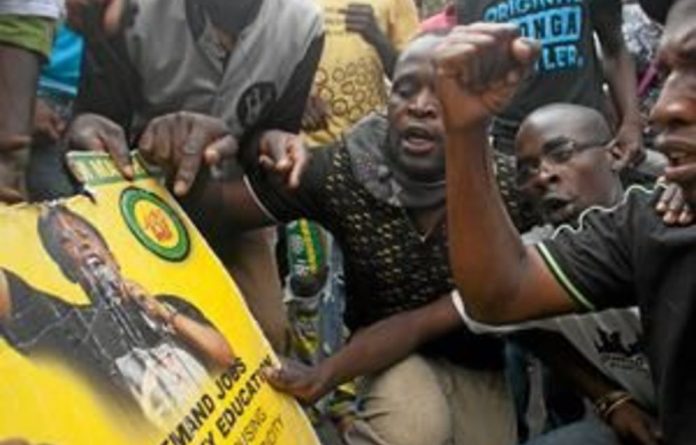 The five-year suspension of ANC Youth League leader Julius Malema’s ANC membership does not mean he will be exiting the South Africa political stage.

After the ruling by the ANC’s national disciplinary committee, announced on Thursday at a media conference at Luthuli House, Malema and his supporters vowed to fight to the bitter end.

He would follow the ANC’s internal processes in challenging the ruling, but his supporters who remained in the ANC Youth League said they would carry on with the programmes he was pursuing, regardless of the outcome of the appeals process.

Believing that the prosecution of Malema and other league leaders was a move to secure the political future of President Jacob Zuma, Malema followers said they would challenge Zuma’s following at ground level. A key Malema lobbyist, who asked to remain anonymous, conceded that the president was now on top and alleged that Zuma loyalists were “stealing” elections, such as the regional conferences in Mpumalanga.

Malema: The tribe has spoken

“The only option we are left with is to fight for the ANC from the ground. They [the Zuma faction] are stealing ANC regions. In Mpumalanga they managed to win all regions because they are using state resources to buy members,” the lobbyist claimed.

Malema told his confidants in an SMS circulated just before the ruling was made public, that he would “soldier on”. He was later quoted on radio as saying his enemies’ victory would be short lived, adding that the gloves were now off.

An irate provincial youth league leader said the movement would fight the ruling against Malema and his fellow leaders in the leadership, starting with the ANC’s appeals committee, chaired by Cyril Ramaphosa.

He said it would take the fight to the ANC’s national executive committee and next year’s conference in Mangaung in the Free State.

The provincial leader said the disciplinary ruling was “political”.

Malema was found guilty of sowing divisions in the ANC and of bringing it into disrepute through his utterances about “regime change” in Botswana and about his view that the African agenda was no longer a priority under Zuma’s administration.

Another source close to Malema said: “We are not surprised by the outcome. What could we expect from a committee that includes Collins Chabane, Derek Hanekom and Susan Shabangu, whose hatred for Julius is public?

“But the youth league is not scared and they will fight this issue. The agenda of this thing is to weaken Mbalula. But if Malema is gone, Ronald Lamola is there. Malema and Lamola are the same person.”

In a statement hours after the ruling, Magaqa said that the league was “outraged” because it was not afforded an opportunity to present “mitigating circumstances” during the hearing.

Magaqa said the league would convene an urgent national executive committee meeting this weekend to consider the implications of the rulings and the way forward.

Another member of the league’s national executive committee expressed optimism, saying it would fight back. “They are celebrating now, but this will last for five minutes. We’ll come back.

“We thought people would come to their senses about building unity within the organisation, but it’s clear that we are dealing with thugs.”

Hanekom dismissed allegations that the charges against the league were part of political machinations ahead of next year’s conference, where the league plans to replace Zuma with his deputy, Kgalema Motlanthe, and Mantashe with Mbalula.

“We want to assure the public and everyone that this committee acted with integrity and fairness and there was no undue pressure on us,” he said. “There was unanimity and consensus in terms of the ruling and penalties against the youth league members.”

Hanekom punched holes in the league’s defence that it was autonomous and therefore independent of the ANC.

“The constitution of the ANC Youth League attributes the existence of the league to the ANC and specifically provides that it shall be located within the overall structure of the ANC. This is reinforced by the dissolution clause, which provides that its assets shall vest in the ANC,” he said.

‘Structure in violation’
In terms of the league’s argument that the charges were instituted by national officials as a structure in violation of the ANC constitution, Hanekom said this was rejected because “it can be inferred that an organ exists in the ANC known as national officials, which is distinguishable from the national executive committee and the national working committee and that such organ has the powers conferred on it” in terms of the constitution.

Political analyst Zamikhaya Maseti said time was needed to see whether the membership of the youth league would accept the decision of the party’s disciplinary committee.

“Another question is whether Julius Malema will appeal against this harsh sentence. I feel sorry for the appeals committee,” said Maseti.

He said there would now be a leadership vacuum in the league that might be filled by its deputy president, Ronald Lamola.

“I’m not sure whether the deputy president would assume the position and then go to a special conference [to elect a new leadership structure]. Even the remaining members who have suspended sentences will not be as strong as before, because they are coming back as lame ducks.”

He said the way in which the disciplinary committee presented its findings, using last year’s national general council resolutions, would make it difficult even for members who sympathised with the league to show support.

“No member of the ANC in good standing will want to be seen as contravening the council resolutions by supporting Malema,” said Maseti.

“The entire project of 2012 is in total disarray. I don’t even see them reconvening [before the Mangaung conference].”

Political analyst Zwelethu Jolobe said the suspended sanctions against the league’s other top leaders meant that it had been “basically neutralised”.

“They will no longer be as robust [as before]. They will exist [but] their influence is severely compromised. And that signifies Zuma’s short-term ascendancy, because all the aces are in his hand now,” said Jolobe.