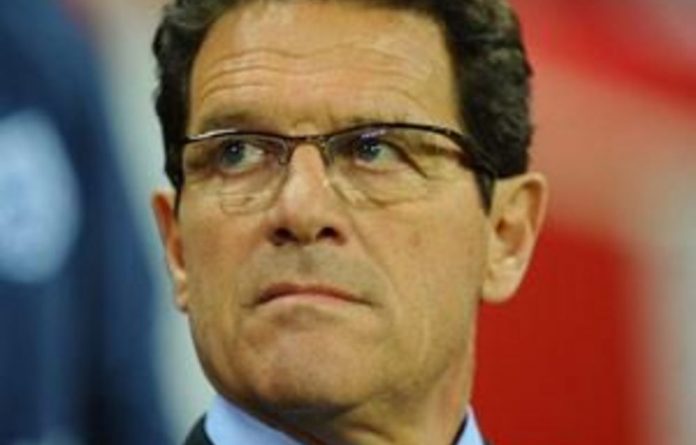 England are preparing for a demanding examination of their Euro 2012 credentials on Saturday as Fabio Capello’s side take on reigning world and European champions Spain at Wembley.

Injuries have already deprived Capello of Steven Gerrard, Jack Wilshere and Ashley Young and the Italian’s task has been made even more challenging by his decision to drop Wayne Rooney after his red card against Montenegro last month.

On top of all that, Capello was handed another hospital pass by the racism row that has embroiled skipper John Terry, only eight months after he was restored to the captaincy after being stripped of the armband a year earlier.

An unedifying media-driven circus over the FA’s request to embroider poppies on England’s shirts to mark Remembrance Sunday was another distracting sideshow that Capello could have done without.

Although Terry remains in the squad, Capello has indicated the Chelsea defender is not expected to feature against the Spanish, barring unforeseen injuries, but will most likely play against Sweden.

Sizeable task
It all adds up to the prospect of a makeshift England facing a settled Spain, whose embarrassment of riches is reflected by the fact that seven of Vicente del Bosque’s squad were named on the 23-man shortlist for Fifa’s Ballon d’Or award.

To further emphasise Spain’s strength in depth, David Silva, widely regarded as the best player in the English Premier League this season, can’t even be certain of a place in del Bosque’s starting XI.

Capello, who may well be left regretting his decision to skip his son’s wedding in Italy by the time Saturday’s inquisition is over, is under no illusions about the size of the task facing his team.

“I think they’ve got a lot of top players,” Capello said, agreeing with the suggestion that they are one of the best sides he has ever seen.

Game plan futile
Capello cited Barcelona’s Champions League final demolition of Manchester United in May as evidence of the difficulty in trying to combat the Spanish.

“If you press Barcelona, they’re used to it so they play one-touch, they move the ball quickly,” Capello said.

Attempting to emulate the Spanish game plan would be futile with his current resources, Capello said.

“It’s a big mistake to copy this style. You need to play the style to fit the kind of players you’ve got in your squad,” he said.

Capello believes he is hamstrung by the dearth of English players available for selection, citing the proliferation of foreigners plying their trade in the Premier League.

‘Style of play’
“I think we’ve done a pretty good job. English football has only 33% English players. No more. This makes everything difficult,” he said this week.

“We have good players of our own but not good enough to try to have the style of play which Spain have.

“You cannot think of playing one touch if you do not have the quality.”

England can also take scant comfort from their record against major footballing powers since Capello took over in 2008.

While the Italian’s overall record is respectable — played 40, won 26, drawn 8, lost 6 — in matches against top opposition England have been found wanting.

No fear
In seven games England have played against Germany, France, Spain, Brazil and the Netherlands since 2008, Capello’s men have won just one, while losing five and drawing one. Those defeats included a chastening 2-0 loss to Spain in 2009, when del Bosque’s side passed England off the park.

Yet despite all the evidence pointing to another demanding assignment on Saturday, England goalkeeper Joe Hart insists his team-mates do not fear Spain.

“They’re not light years ahead and we’re not going to go in in awe of them because they’re a team that we’re playing against,” Hart said.

“We’ve got some fantastic players and so have they so it makes for a really interesting game … This is a test, playing against the best and we’ll see what we’ve got.” — AFP

The age of schadenfreude is at its prime