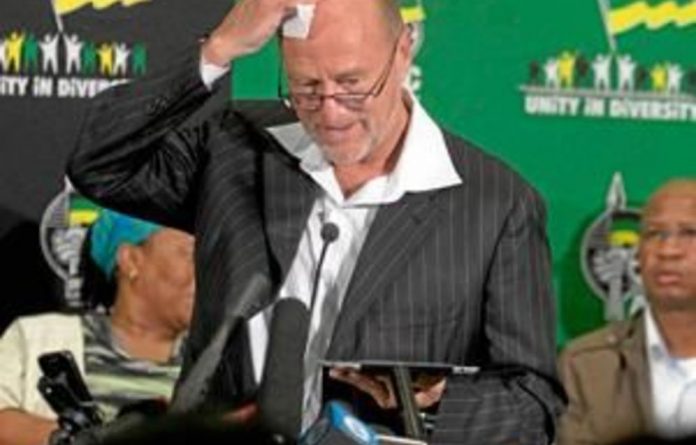 Derek Hanekom, the deputy science and technology minister and ANC national disciplinary committee chairperson, explained in minute detail to the media on Thursday how and why the committee had sanctioned youth league leader Julius Malema and his cohorts. The committee’s findings were as follows:

The charge was of contravening rule 25,5 (q) and (o) of the ANC constitution by deliberately disrupting a meeting of the party’s national office-holders on August 9 and, in doing so, undermining the authority of ANC secretary general Gwede Mantashe.

The group was found guilty because it was “untenable” to enter a high-level meeting, which included the president and deputy president of South Africa and the ANC, uninvited. The committee found that the disruption undermined the effectiveness of the party and disobeyed a directive by Mantashe. It noted that the group may have been frustrated, but that “ill-discipline was not a cure for frustration”.

All of those charged had their ANC membership suspended for two years, a sanction suspended for three years provided none of them undermined the party’s constitution or code of ethics in that period.

Individual charges
Julius Malema
Three charges were levelled against Malema in his individual capacity: Contravening rule 25.5 (i) of the ANC constitution by sowing divisions in the party by comparing the leadership style of former president Thabo Mbeki to that of President Jacob Zuma.

Flouting rule 25.5 (c) of the ANC constitution by bringing the organisation into disrepute through his statement that the Botswana government was a “threat to Africa” and the youth league would set up a “Botswana command team” to bring about regime change in that country.

Infringing section 25.5 (d) of the ANC constitution by propagating racism or political intolerance, because he told an election rally in Galeshewe in May this year that whites should be treated as criminals for stealing land from black people.

The youth leader was found guilty of sowing division in the ruling party, because his leadership comparison portrayed “the current government and its leadership under President [Jacob] Zuma in a negative light and therefore had the potential to sow division and disunity”.

He was found guilty of bringing the ANC into disrepute on the basis that the statements were “reckless and baseless” and “not part or within the parameters of ANC policy”.

He was, however, cleared of promulgating racism, because this charge was not proved on a balance of probabilities.

Sindiso Magaqa, secretary general
Magaqa was charged with infringing rule 25,5 (o) of the ANC constitution because he prejudiced the integrity of the organisation and created divisions in it by making derogatory remarks about national executive committee member and Public Works Minister Malusi Gigaba on August 2.

Magaqa’s remarks were contained in a statement in which he accused Gigaba of “pleasing imperialists” by saying the nationalisation debate was hurting foreign investment in South Africa.

Magaqa was found guilty because his statement undermined the effectiveness of the ANC as a ruling party and Gigaba’s position as minister.

Floyd Shivambu, spokesperson
Shivambu was charged with: Infringing rule 25.5 (o) of the ANC constitution by prejudicing the party’s integrity, impeding party activities and creating divisions in party ranks and among members. This breach related to his swearing at Jacques Dommisse, a Media24 investigative reporter, in July and the issuing of a press statement accusing the Botswana government of “embracing imperialism” and calling for regime change in that country.

Breaching section 25,5 (i) of the ruling party’s constitution through provoking a breakdown of unity in the ANC by issuing a press statement on August 2 relating to Botswana, which discounted a corresponding statement issued by ANC spokesperson Jackson Mthembu, thus driving a wedge between the spokesperson and party officials.

Shivambu was found guilty as charged for the foul language he directed at the journalist and his issuing of press statements relating to the league’s stance on Botswana.

He was, however, cleared on the charge of provoking division because this overlapped with the other charge.