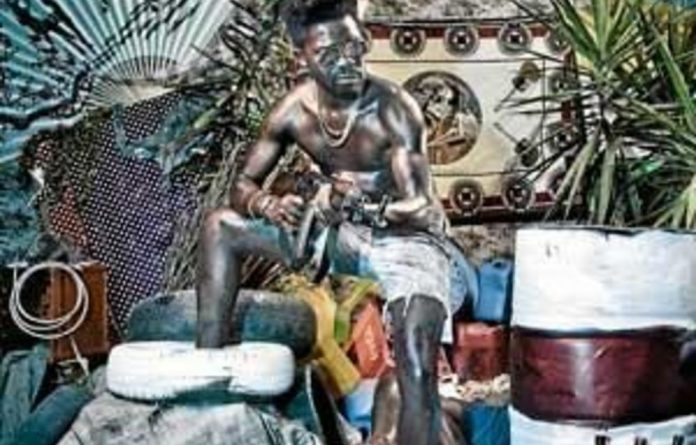 Kudzanai Chiurai’s exhibition, State of the Nation, is set in a nameless African country that could answer to the Orwellian name of “The ­African Republic”. This state could be ­Zimbabwe, Rwanda, Uganda, Liberia or Libya, what you might call problem states.

It allows Chiurai to fly into trouble zones, choose a particular gory detail, give it artistic treatment and move on to another failed African state.

Thus, State of the Nation becomes a necropolis of sorts: death and its symbols, dying and its rituals, power, plunder and its mythology are treated in interesting, if disturbing, ways.

The exhibition, consisting of video, charcoal drawings, a sound installation, a sculpture, a performance, oil paintings and photographs, officially opened to the public last week at a warehouse in a forgotten street in downtown Johannesburg.

The event, which must rank as one of the best gigs on Jo’burg’s arts scene this year, includes performances by Thandiswa Mazwai, Zaki Ibrahim, João Orecchia, Mpumi Mcata and Tshepang Ramoba.

The photographs seem a good point to start off this review. Long after seeing the works, the abiding image etched in one’s mind is one of men and women ­wielding an assortment of weapons: machetes, rocket-propelled ­launchers and rifles.

Rituals and artefacts
The gun-toting men — their skins oily, sweaty or greasy, it’s never clear which is which — are always in wildly dramatic poses. They are men you don’t want to meet, not in a deserted downtown or at a random roadblock in a “failed” African state.

The photographic medium and the assortment of rituals and artefacts — discarded tyres, trolleys laden with human skulls, muti dishes — add to the aura, mystique and theatricality of the works.

The 10 photographs, shot by Jurie Potgieter, take up from where ­Chiurai finished off in his last exhibition, The Black President, his series on an imaginary Cabinet.

So is The State of the Nation a sequel or prequel to his 2009 exhibition? Has Chiurai taken the concept further? I am not sure but, then again, the rituals of power in old Africa’s statecraft are such that you don’t know whether a given scene is the aftermath of a war or the beginning of another.

In that vague, subliminal space Chiurai’s protagonists act out the pathology of power using a bewitching melding of spectacle and ritual; the African, the Christian and the impromptu rituals of child soldiers doing battle.

His fascinating sculpture of a pair of conjoined humans (a double cast of himself, actually) forged into a throne and its accompanying podium has been chosen for next year’s Documenta 13, the exhibition of modern and contemporary art in Kassel, Germany.

“I don’t think it’s bleak. It reflects how we can be self-destructive,” ­Chiurai says, when I quiz him on his vision. “Some people say I’m portraying Africa in a bad light. It’s what’s there.”

Funereal air
The paintings don’t offer any respite. If anything, they add to the sobering, funereal air that touches the works. Take, for instance, a painting titled Procession, in which one sees people carrying a corpse on their heads, while a dog chews at an arm. Or ­Corinthians, in which a cadaver lies on what appears to be a postmortem table. In the background is a brooding outline of a cityscape while on a television stand in a corner the beaming figure of Chairman Mao Tse-Tung looks on.

If there is hope in Chiurai’s vision, it resides in his female subjects; gun-wielding, aggressive, yet oddly ­alluring. In the State of the Nation performance Zaki Ibrahim plays the president. But because Ibrahim’s ascent to the throne is constructed to resemble that of the men she has toppled, one can’t draw much optimism from it.

Chiurai, however, insists that “there’s a sense of optimism. A woman can be president.” But does the sex of a president matter if she is going to do exactly what her male counterparts would do?

By way of conclusion, I will use an anecdote from Open City, a fascinating flâneur novel by Nigerian writer Teju Cole. On one of his walks in Brussels in Belgium the novel’s narrator meets Farouq, a Moroccan migrant who knows his country’s literature. Farouq tells the narrator that Tahar Ben Jelloun — one of Morocco’s most prominent authors — writes “out of a certain idea of Morocco. His writing is mythmaking. It isn’t connected to people’s real lives.” Although the Moroccan “wasn’t saying that Ben Jelloun pandered to Western publishers”, he was saying that “the social function of his fiction was suspect”.

Africa has recorded tremendous progress in the past few years. In the past year Kenya adopted a new constitution; the Egyptians peacefully ousted their pharaoh, Hosni Mubarak; and in Zambia Michael Sata is the country’s new president after defeating Rupiyah Banda in elections held some weeks ago.

This nuanced, varied Africa is not referenced in Chiurai’s State of the Nation address. Yet what can’t be scoffed at is his construction of a mythology of power complete with thrones, portraits, speeches and attendant rituals and symbols.

Chiurai celebrates a drunken African power. Perhaps he could infuse his work with just a little bit of ­sobriety.

At 50 Gwigwi Mrwebi Street, Newtown, until December 3. And at Goodman Gallery Projects at Arts On Main, until January 2012