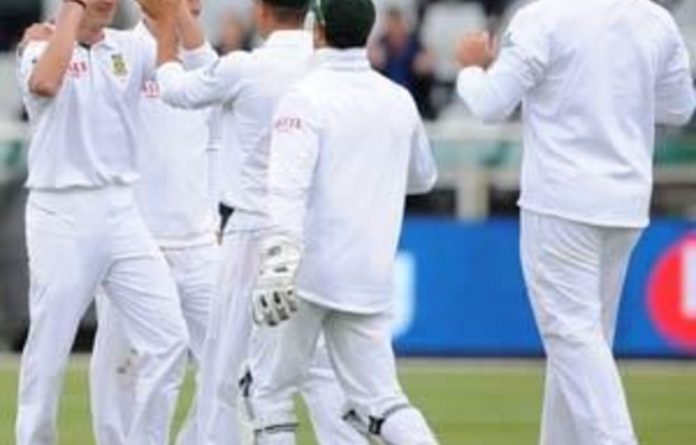 The Proteas begin the third day of their first Test against Australia at Newlands in Cape Town with victory in sight after a bizarre second day’s action.

Finishing day two on 81/1, South Africa requires another 155 runs to win with skipper Graeme Smith (36) and Hashim Amla (29) to begin the charge for the finish line on Friday morning.

But it would be a great injustice to concentrate only on South Africa’s possibly imminent victory in a Test that served up 23 wickets during on the second day, offering a spectacle fans only ever witness at a cricket stadium every decade or so.

So unusual were the events at Newlands on Thursday that it marked only the ninth Test match in the history of the game in which both sides have been bowled out for under 100.

Many would have thought South Africa would be staring down the barrel of a massive second innings deficit after they were skittled out for a paltry first innings total of 96, after dismissing the Aussies for 284 in their first stint at the crease.

To the astonishment of many a cricket fan, the Aussies seemingly self-destructed in their second innings and were dismissed for a lowly 47 with tail-ender Nathan Lyon top-scoring with 14.

Although the resultant target for victory was only a modest total of 236, based on the day’s events, one would think the Proteas went into the second innings hoping only for survival to the third morning’s play.

But South Africa will enter into the third day with victory on the horizon. At the same time, though, they will be full of trepidation, with Thursday’s back-to-back innings collapses fresh on their minds.

Michael Clarke shone in the Australian first innings, scoring over half of the team’s runs with a disciplined 151 that stands him in good stead for a chance at the man of the match award.

Smith might be disappointed that he only scored 37 in the Proteas’ first knock but he looked far more assured at the crease than in recent outings and accordingly gives the sense he might be on his way back to good form.

In bowling ranks, Shane Watson and Ryan Harris shone for the Aussies with five and four wickets respectively in the first South African innings.

For the Proteas, Dale Steyn showed his class with 4/55 in the first innings and a handy 2/23 in the second while Morne Morkel pitched in with 3/82 and 3/9 in the first and second knocks respectively.

The big news for bowling so far has to be Vernon Philander, who underpinned a perfect debut with match figures of 8/78.

He showed some great patience in the first innings, returning figures of 3/63 but his 5/15 in the second innings might just prove why he has finally been given the nod in the test arena.

On a slightly sour note, Jacques Rudolph might have left many fans aggrieved with his poor showing with the bat in his first test since 2006, only scoring 18 and 14 in the first and second innings respectively.

So says Rudi Dicks, who is in charge of coordinating President Cyril Ramaphosa’s initiatives to drive structural reforms and employment
Advertising