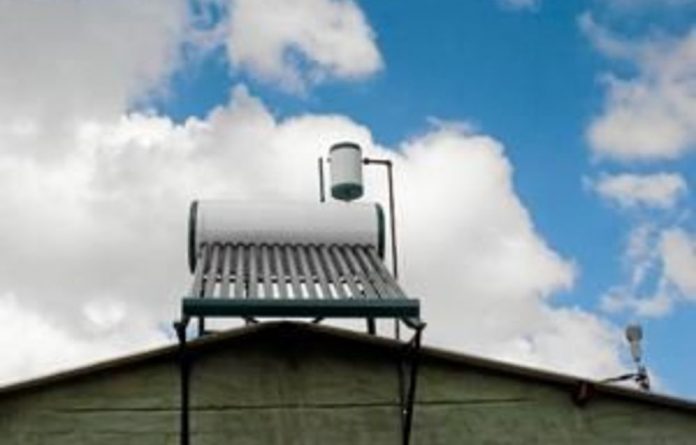 As South Africa prepares to sign a green energy accord to establish an industrial sector dedicated to green technology, solar water heater-makers in the Western Cape are shutting their doors after decades in the business.

Solar Dome, a solar water heating systems manufacturing company, has been running since 1969 but will close down at the end of November.

A stalwart in the region, according to industry players, it has fallen foul of increased regulatory costs and what critics describe as the unclear policy that came with the advent of the state’s solar water heater (SWH) roll-out programme.

Helmut Hertzog, the managing director of Atlantic Solar and a critic of the fate that has befallen Solar Dome, said that, since the advent of the SWH rebate programme, led by Eskom, the industry had been in a “state of flux”.

“The intention of the solar subsidies as a demand-side management mechanism was to increase the demand for solar water heaters and, to this extent, Eskom was adamant that the industry did not have the required capacity to serve this new demand,” he said.

Hertzog said that, before the advent of the programme, 50% to 70% of all solar systems installed were locally manufactured. But Eskom had yet to implement a local-content multiplier in its rebate formula. The roll-out of one million solar water heaters is just one aspect of the state’s drive to develop a green economy that would develop the industrial capacity necessary for the manufacturing of green technologies.

The green accord, being negotiated by business, the government and organised labour, is focusing on a wide range of issues, including the procurement of renewable energy, the promotion of biofuels, clean coal initiatives, waste recycling and electric vehicles, and a mass shift to rail and public transport.

But the SWH programme, arguably the low-hanging fruit when it comes to developing a green economy, has been fraught with difficulty, not least of which has been its slow uptake.

Francois du Plessis, the chief executive of Green Cape, a sector development agency established by the Western Cape provincial government, said that many of the procurement rules and incentives had “been written without taking into account the practicalities of the market and manufacturers that already exist”.

SWH rebate programme
South Africa already had SWH component-makers in the country when Eskom introduced the SWH rebate programme. But the standards testing regime of the South African Bureau of Standards was designed to test solar water heating systems, which meant that makers of components had to test their units in a range of different systems before they could meet the requirements.

“We have set up a system that is costly for local component manufacturers to break into. It discriminates against them [in favour of] importers of systems,” Du Plessis said. “We are paying taxpayers’ money in rebates to import products.”

But the challenges to growing a local green manufacturing base are not only manifest in the SWH arena. On Tuesday, the department of economic development and the Industrial Development Corporation (IDC), in a presentation to the portfolio committee on economic development, revealed some of the local-content requirements of the request for proposals (RFP) for the state’s renewable energy procurement programme.

According to the department, the local-content requirement for wind is 25%, for solar photovoltaic it is 35%, and for concentrated solar power (CSP) it is 25% with storage capacity and 35% with no storage capacity.

Du Plessis said that the local-content requirements in the RFP were way below what the local industry could manufacture.

He pointed to a Council of Scientific and Industrial Research report done in 2008 that indicated that, without substantial technological advances, South Africa could produce 65% of wind turbines locally.

Research by Green Cape also indicated that 90% of the solar photovoltaic requirements and 65% of CSP could be met locally.

“Procurement rules have been set up in such a way that we don’t maximise local economic benefit out of it,” he said.

The use of foreign consultants, in particular, to draft tender documents had led to cases in which South African suppliers of components had been sidelined in favour of foreign suppliers.

Du Plessis argued that, where renewable manufacturing capacity did not yet exist, in many cases it could be built up within a year.

Impact on roads and road maintenance
The failure of various arms of government and the host of affiliated business units to co-ordinate properly was also a problem.

Du Plessis also said that the expected construction of wind turbines would result in an enormous increase in heavy-duty road haulage, and little consideration had been given to the impact that would have on the roads and road maintenance.

The roll-out of the Integrated Resource Plan 2010 would generate about R18-billion of capital expenditure annually until 2030, he estimated. But roughly R6-billion to R10-billion of this would be imported when it could be generated locally.

Another problem was the lack of capacity at local government level.

Du Plessis said a number of municipalities had biogas facilities in place at their sewerage works but these had become idle because they did not have the skills and manpower to run and maintain them.

In Parliament, department director general Richard Levin conceded that in the development of a green economy, the state’s ability to implement programmes was “going to be critical”.

Funding for the roll-out of the various technologies remained something of a challenge, he said.

Eskom has put a limit on the number of claims companies can make for SWH rebates in a bid to make the R357-million it has remaining last until the end of this financial year.

Levin said that the roll-out of low-pressure systems — used chiefly in low-cost housing — provided an opportunity to introduce a contracting model for the supply of the units. This type of model would allow the government to implement localisation targets for elements such as manufacturing.

Rentia van Tonder, the head of the IDC’s green industries unit, said the IDC was concerned about the closure of local manufacturers. The IDC had been lobbying Eskom to include a localisation element to the rebate programme, she said.

Levin said the development of renewable energy had the potential to create a number of jobs. (See box). In the first round of the RFP, the IDC’s portfolio of projects was in excess of 800MW and had an estimated project value of R27-billion.

Eskom said it recognised the need to support local industry and had proposed a differentiated rebate based on the extent of local content. Calculation of the rebate differential was not a trivial exercise, it said, as an auditable assessment needed to be done for each system down to component level. It expected to implement this by early 2012.

It denied that it was limiting the number of rebates issued to companies. Eskom said it had raised the R328-million allocated for SWH by the National Energy Regulator to R873-million in support of the government’s target. “Of this amount, R350-million is still available for use over the remaining five months of our financial year. We are on track to have fully spent the [significantly increased] budget by year-end.”

The total cost of the programme would be about R5-billion, of which about R2-billion is in current plans.