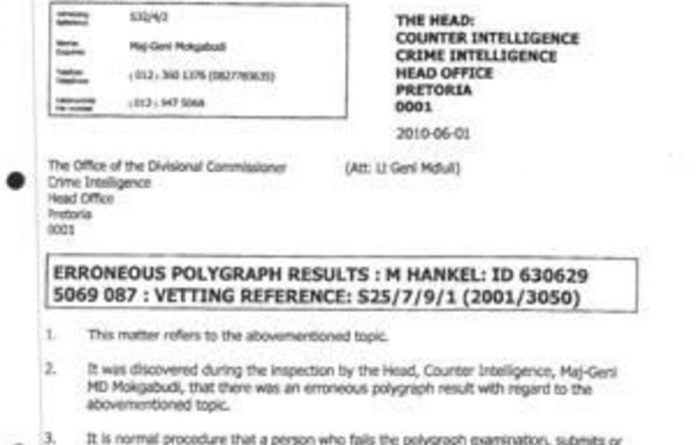 At the time the allegations were dismissed as a “smear campaign”, but the new information suggests that the top police spy, who sits at the centre of the South African Police Service intelligence network, has a case to answer.

Hankel was regarded as an ally of suspended crime intelligence boss Richard Mdluli, but he is believed to be co-operating with the Hawks in their investigation of corruption and abuse of power at the crime intelligence division, making him a potential target for some of his colleagues.

The documents raise questions about whether the allegations against Hankel were ever properly investigated and why Mdluli, for one, appeared to protect him.

In response to detailed questions sent by the M&G to the police for comment, Hawks spokesperson MacIntosh Polela said: “The issues you have asked questions about are confidential. We are also unable to ascertain whether or not the documents you have in your possession are authentic.

“This story has been shopped around different newsrooms for months. It’s surprising why you have chosen to write about it now. We hope you are aware that you are being used. As a result we cannot comment.”

At the core of the claims is a detailed affidavit by police polygraph expert Lieutenant Colonel Josiah Maponyane. The statement, dated June 2010, recounts how Hankel twice failed his polygraph test in May 2002 but how, feeling pressured by his superiors, Maponyane allowed an “inconclusive” finding to be recorded. This allowed Hankel to retain his top-secret clearance.

Of particular concern is that, according to Maponyane’s statement, Hankel showed “clear deception” when asked if he had committed “any serious crime” in the previous five years.

According to Maponyane, after Hankel showed significant reaction to this question, he stood his ground and denied any form of wrongdoing.

Maponyane told him that a follow-up session would have to be held to focus on clearing up this aspect.

Maponyane sets out what happened next. “On Monday — the commander of the polygraph unit, Superintendent Hein Allers, called me into his office. In this discussion he informed me he had a meeting with director Mark Hankel over the weekend at a coffee shop somewhere in the Pretoria area.”

Maponyane states that Allers told him Hankel had explained that he could not confess the reason for his reaction because Hankel was unsure of Maponyane’s “background”. Allers then instructed that the follow-up session should go ahead.

When Hankel arrived he first confirmed that Maponyane had already been briefed by Allers. “The examinee then produced a piece of paper from his jacket breast pocket and read his confession for me.”

Hankel’s story was supposedly that during his days at Fort Hare University he was “handled” as a source for the apartheid security branch and gave information that contributed to the capture and disappearance of Matthew Goniwe, a fellow student at the time.

This continued to weigh on his conscience, he said, especially because he had never applied for amnesty at the Truth and Reconciliation Commission.

But Maponyane records that when he tested to see whether the examinee was telling the truth in this confession Hankel again showed a significant reaction.

Hankel was asked: “Other than what you told me about, during the last five years have you committed a serious crime?”

“Once again, as the most junior examiner in this field back then, I succumbed to this kind of pressure.”

Some elements of Hankel’s alleged explanation are known to be false. For instance, Hankel, a white person, studied at the University of Port Elizabeth, not Fort Hare.

In a carefully worded affidavit also seen by the M&G Allers confirms Hankel called him to a meeting after the first “failed” test.

He also confirms that the second test was recorded as “inconclusive” by both Maponyane and himself.

“I was unaware of this mistake for approximately seven years until Major General [Dan] Mokgabudi called me in July 2009 to inquire about the results of this polygraph examination. Upon re-examining the filed polygraph results, it was clear — the results — should have been interpreted as deceptive.”

He notes that Hankel passed another polygraph test in 2008 without any problem.

Mokgabudi was at the time the head of counterintelligence in the police. It is not known what led him to query Hankel’s vetting, but it took place shortly after Mdluli was appointed head of crime intelligence.

As it was, Mokgabudi appears to have moved slowly in acting on this information. According to Allers, he was questioned about the matter again by Mokgabudi in January 2010 and asked to prepare a statement in May that year.

The documentation seen by the M&G suggests Mokgabudi first wrote to Mdluli about Hankel in June 2010, recommending that he be transferred pending a full investigation.

He wrote to Mdluli again in July with a stronger-worded letter, stating that Hankel’s security clearance should be “withdrawn with immediate effect” and the matter “be subject to an in-depth investigation”.

Mdluli then asked the crime intelligence legal division for an opinion. In its response it noted that when an employee in a high-security environment failed a polygraph it was advisable he be moved away from a position in which he would be dealing with sensitive information.

Mdluli did not follow this advice. Instead, on July 22, he issued an instruction that “another vetting process” be conducted.

In light of the fact that Hankel had already passed a polygraph test in 2008, it is not clear what this would have achieved.

By mid-2010 Mdluli was under investigation for murder and there are indications he used the crime intelligence division to monitor those investigating him.

He was arrested by the Hawks in March this year in connection with the 1999 murder of Oupa Ramogibe, the husband of his former lover.

It does not appear that the police have ever properly investigated the alleged manipulation of Hankel’s vetting in 2002.

Mdluli has claimed in court that he is the victim of a political conspiracy by certain police officials who did not want him to become the head of crime intelligence.

A secret report declassified by Mdluli surfaced shortly after his arrest. In the report it was alleged that the battle lines had been drawn by anti-Zuma ANC members.

Meanwhile, the Hawks’ investigation into the alleged abuse of state funds and resources at crime intelligence has gained momentum.

In September Mdluli was arrested with Colonel Hein Barnard, the supply-chain manager for the division’s secret services account, on charges of fraud and corruption. The charges are linked to a discount allegedly solicited last year to pay a shortfall on Mdluli’s private car.

Another person of interest in the Hawks’ investigation is Major General Solly Lazarus, the man who controls the secret slush fund and who has been said to have had a close relationship with Mdluli.

The M&G understands that Lazarus and Hankel are on different sides of the fence.

Lazarus previously declined to comment to the M&G about the allegations and referred all queries to the police’s media liaison.

The M&G understands that the Hawks are “eyeing more people in crime intelligence in the coming weeks to arrest them on corruption and fraud charges”.