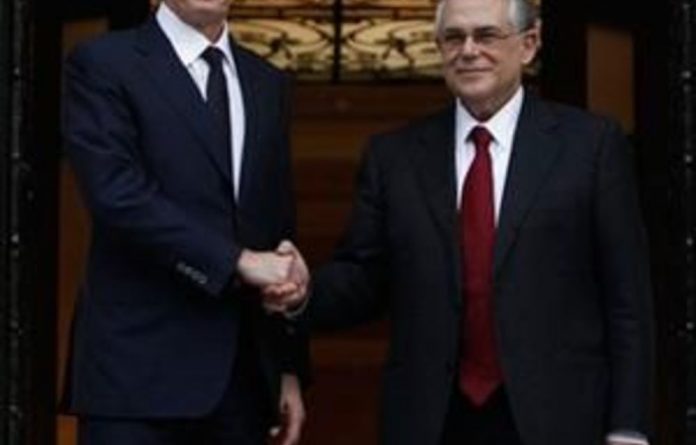 Technocrat Prime Minister Lucas Papademos took office on Friday to save Greece from bankruptcy, heading a coalition Cabinet filled with many of the same politicians who led the nation into crisis and pushed the eurozone to the brink of collapse.

At a colourful swearing-in ceremony, black-robed Orthodox priests, led by the Archbishop of Athens, blessed Papademos and a Cabinet dominated by the two main parties which had bickered for four days before agreeing on the crisis coalition.

Apart from Papademos, a former European Central Bank vice-president with no political experience, the Cabinet’s main new face is from the LAOS party — the first time the far right has joined a Greek government since a military junta fell in 1974.

As politicians in Italy pushed through austerity measures and contemplated an emergency government to stave off the crisis creeping deeper into the eurozone, Papademos said his priority would be to meet the terms of the country’s EU, IMF bailout and pull Greece out of recession.

“The final result will depend much on whether we succeed in stabilising the real economy, reining in unemployment and setting the ground to revive the economy and gradually boost employment in a relatively short time,” he told his governing team in its first meeting.

“That’s why I would like to ask everyone to do his best in the next coming days, weeks and months.”

The line-up includes Socialist party power broker Evangelos Venizelos, who keeps the post of finance minister that he held in Papandreou’s government.

Analysts said Papademos — a quiet academic economist — had to assert his authority over a Cabinet packed with the hardened conservative and Socialist party politicians who took turns in power for decades as Greece built up a huge debt it could not manage, forcing an international bailout.

“Greece has a government that is the result of political compromise among three parties. It is obvious that there was a dealing of the cards,” said Costas Panagopoulos, head of ALCO pollsters. “It all now depends on how the prime minister handles them.”

Clear mandate, tough task
The interim government of national unity, which has a bumper 48 ministers and their deputies, plans to announce its platform on Monday evening, then conduct a debate and win a confidence vote in Parliament by early next week.

It has a clear mandate that may not be so simple to implement before it calls an early general election, tentatively agreed for February 19.

It has to push through Parliament Greece’s second bailout deal in as many years — a plan that includes fighting tax evasion, selling off state companies and cutting the public sector — to get hold of €130-billion in long term funds.

But Athens also needs money fast from its IMF and EU lenders to meet big debt repayments due in December or face default, bankruptcy and the danger of leaving the eurozone.

“Our first priority is clear. It is the timely release of the €8-billion tranche before December 15. There is readiness for this from our partners and the IMF for this to happen on time,” he said.

A source from the so-called troika of the EU, the IMF and the ECB said inspectors would visit Athens early next week to speak with the new government and would clear the tranche only when it pledged to meet its commitments.

Both the Socialist PASOK and the conservative New Democracy parties say they will vote for the new bailout in Parliament.

However, the package demands policies and reforms which are likely to be highly unpopular as the parties prepared for the elections, expected in February at the earliest.

It stipulates yet more of the punishing austerity that will push the country into a fourth year of recession, has sent unemployment soaring to a record 18.4% and brought Greeks out on to the streets in sometimes violent protests.

Best behaviour
The two main parties kept Greece in suspense for days as they argued over who should lead the coalition, with one deal to install the speaker of Parliament collapsing after Papandreou announced he was handing over to a new premier.

However, even after Papademos was confirmed as prime minister, manoeuvring over who got which job dragged on, with the Cabinet list released only as ministers started arriving at the presidential palace to be sworn in.

Conservative Opposition leader Antonis Samaras agreed to back the new Cabinet but refused to bow to pressure from Greece’s lenders to buckle down on reforms.

“We are all well aware that our country has lost the last trace of decency in the last couple of days. Together we will restore it very quickly without accepting being humiliated or insulted,” he said.

Far-right LAOS won their place at table of a Cabinet that was supposed to include all parties. However, left-wing groups refused to participate.

On the streets of Athens, people welcomed a fresh face at least at the top, but hoped the consequences would not be too severe for a country weary of hardship.

“The measures that have already been announced will be imposed,” said civil servant Yiannis Papageorgiou (57) referring to a wave of pay and pension cuts, public sector layoffs and privatisations agreed under the bailout deal.

“But at least I hope that the new government will not take any further measures, because until now Greek workers have been the only ones who have been paying for the crisis.” — Reuters