Rich nations could take a page from the developing world 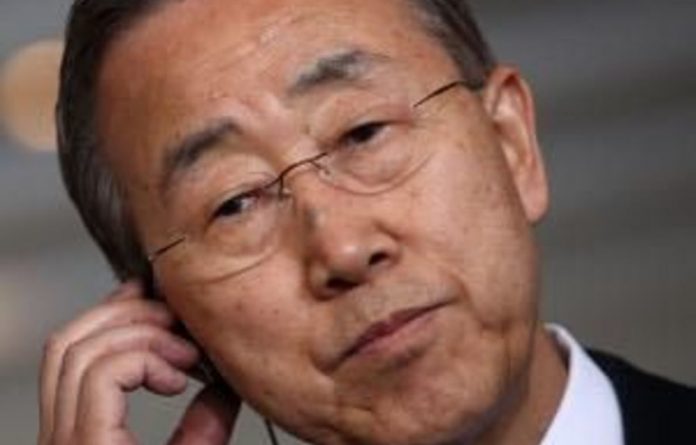 Some of the countries most affected by climate change should be an “inspiration” to rich nations on reducing their emissions, UN secretary general Ban Ki-Moon said on Monday.

Speaking at the Climate Vulnerable Forum — which brings together countries most affected by climate change — Ban praised low-lying nations such as the Maldives, Costa Rica and Samoa for committing to become carbon neutral.

“In this time of global economic uncertainty, let [these countries’] commitment to green growth be an inspiration to more developed countries — the major emitters,” he said.

He said it was unfair to “ask the poorest and most vulnerable to bear the brunt of the impact of climate change alone” and called for the release of agreed funds to help poor countries to adapt to global warming.

The meeting in Dhaka of 18 countries most affected by climate change was aimed at fixing a united front ahead of UN talks in Durban, South Africa, in December where a “Green Climate Fund” will be negotiated.

‘Deep concern’
The countries at the forum adopted the Dhaka Declaration late on Monday, “expressing deep concern” at the slow realisation of commitments made in earlier UN climate talks and calling for the climate fund to be set up quickly.

“There are a lot of commitments and pledges but there is very little disbursement,” said Bangladesh’s state minister for environment Hasan Mahmud.

Bangladesh needs at least $10-billion to help with climate change adaptation but has so far received less than $200-million, he said, adding that other climate vulnerable countries were in the same predicament.

“It is time for developed countries to stop fooling around,” said Maldives Foreign Minister Ahmed Naseem.

The forum was also aimed at showcasing some of the adaptation strategies already in place in vulnerable nations and Ban praised low-lying and deeply impoverished Bangladesh for becoming a “world leader in disaster preparedness”.

‘Slow and inadequate’
Using early warning systems and community volunteers, Bangladesh has significantly reduced the number of people who die in cyclones, showing the world that “natural hazards need not cause human catastrophe,” Ban said.

Bangladesh is building more cyclone shelters, extending its climate resistance agricultural scheme and planting greenery along the coast — all using money from its domestic climate fund.

The forum reflected the fact that the pace of international climate negotiations was “very slow and inadequate” said Bangladeshi Prime Minister Sheikh Hasina, speaking at the opening on Monday.

“We are bearing the brunt of the damage though we made negligible or no contribution to the menace. This constitutes a serious injustice … and demands immediate rectification and remedy,” she said.

Working together
Among the countries meeting in Dhaka are Afghanistan, Bhutan, Costa Rica, Ethiopia, the Maldives, Nepal and the Philippines.

The forum is not just an effort to call on rich countries to assist more vulnerable nations but is “an invitation to work together,” the former president of Costa Rica, Jose Maria Figueres Olsen, told Agence France-Presse.

“This is just a win-win opportunity. Low carbon is good business,” he said, adding that rich nations should view the current economic crisis as a good chance to move towards a low-carbon economy.

“We are trying to go back to business as usual [but] the current crisis is absolutely an opportunity to get out of a rut,” he said. — Sapa-AFP