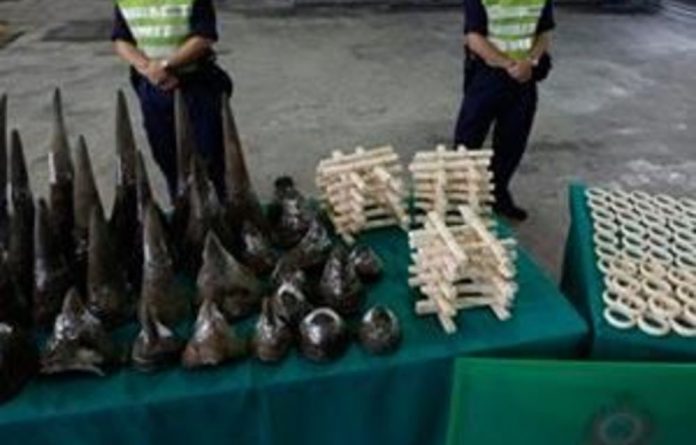 Hong Kong customs officers have seized a record haul of 33 rhino horns along with ivory chopsticks and bracelets hidden inside a container shipped from South Africa, officials said on Tuesday.

Officers found the horns along with 758 ivory chopsticks and 127 ivory bracelets in a haul worth a total of about $2.2-million during a search Monday of a container declared as containing “scrap plastic”.

Senior customs official Lam Tak-fai told RTHK radio that the horns were carefully wrapped in multiple layers of materials and hidden in the rear of the container.

“We think the smugglers wanted to make it look like waste plastic material so as to evade customs detection,” he said, adding the haul was believed to have been destined for a neighbouring country.

Lam said rhino horns had been seized in Hong Kong in the past but never in such large quantities.

“Altogether we have 86.54kg of rhino horns, it’s a record seizure so far in Customs history,” he said.

Record high
Conservation group World Wildlife Fund said earlier this month that rhino poaching in South Africa had hit a record high, with 341 of the animals lost to poachers so far this year as black-market demand for their horns soars.

Officials blame the poaching surge on organised crime syndicates selling rhino horn for use in Asian medicinal treatments — especially in Vietnam, where it is believed to cure cancer.

The UN wildlife trade regulator has called for stiffer penalties for poachers with the price of a rhino horn per kilo fetching around $50 000.

Under Hong Kong law, anyone found guilty of importing endangered species for commercial purposes is liable to a maximum fine of over $640 000 and two years’ imprisonment.

No one has been arrested so far and Lam said the investigation was continuing. — Sapa-AFP