Thousands to benefit from chess as a teaching tool 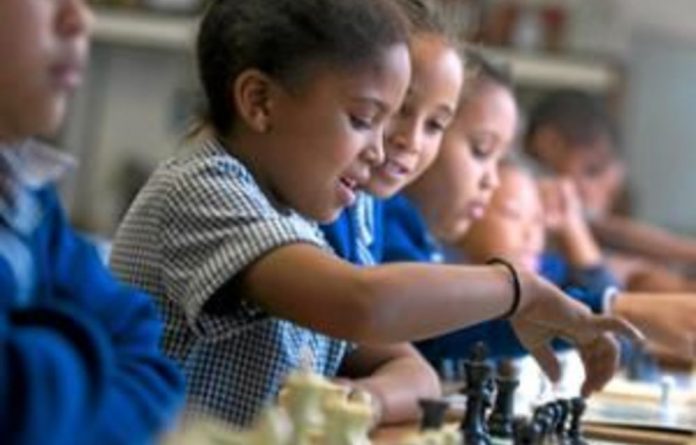 An initiative that uses chess as a medium to help learners from grades R to three to perform better in maths and science is being rolled out to schools across the country. To date the programme has been launched in 50 schools, benefiting close to 7 000 pre-primary and high school learners.

President Jacob Zuma endorsed the project last October when he officially launched it and has agreed to be its chief patron. “It is an important game in many aspects, the main benefit being that it contributes to the development of strategic thinking as well as concentration, analytical skills and problem solving,” he said.

The game, called MiniChess, targets children between the ages of five and eight (grades R, one, two and three), to equip them with the skills to cope well in maths and science.

According to its founder, Marisa van der Merwe, it was decided to intervene at an “entry phase” of learning so that by the time the children start grade one they are adequately equipped to learn basic maths and science concepts.

Begin at the critical age
Teaching the children when they are at a critical stage of development not only sharpens their cognitive abilities but also heightens their problem-solving skills, she said.

“If children are not taught early, it becomes increasingly difficult for them to cope at a later stage and maths and science concepts become abstract. The interesting thing about the programme is that children get to learn these core maths concepts in a fun way,” said Van der Merwe.

The programme, which is sponsored by Moves for Life, has been painstakingly put together over a period of time and has been integrated into the school curriculum. “We use the chessboard as a matrix or a counting grid to teach spatial concepts, shapes and form recognition, fine motor skills such as cutting and pasting, and numerical concepts,” said Van der Merwe.

Teachers get sufficient training and regular support to ensure they have the necessary tools and skills to use chess in a creative and engaging way, she said. Workbooks, manuals and the basic equipment needed to play chess are provided to both learners and teachers. Van der Merwe has assembled a team of like-minded people, such as Joreta Parsons, an educational psychologist who is doing a doctorate at the University of Pretoria, and Watu Kobese, an international chess master, who provides chess training at the project’s nerve centre at Hoerskool Waterkloof, east of Pretoria.

The Teacher accompanied Van der Merwe to three schools that are involved in the project. The schools’ principals raved about the initiative’s educational benefits. One such beneficiary is Mvelaphanda Day Care Centre, which serves the informal settlement community of Duduza, in Thembisa, Gauteng. The facility was founded by Olga Sinobolo in 2000 with only six children. The numbers grew rapidly and she was compelled to take over a nearby dumping site and rehabilitate it to erect additional shacks to accommodate the current enrolment of 163 children.

Cheryl Fortuin and Colleen Slingers, grade one and two teachers respectively at Jakaranda Primary School in Eersterust, Tshwane, swear by the initiative. “We started by introducing the children to the chess pieces and we were amazed at how quickly they understood and enjoyed the game. The workbooks we received also helped us immensely in teaching them better. The kids displayed improvement in discipline, problem-solving and numeracy,” said Slingers.

Asparsia Mahlangu, a grade 12 learner at Jafta Mahlangu in Mamelodi, reckons chess is the best educational tool. Mahlangu recently won gold in a chess competition in his region. He said chess is inherently linked to maths. “It is challenging and keeps you alert as you calculate and ponder your opponent’s next move. Before I played it I used to hate maths but since I started playing it my attitude has changed markedly and so has my performance.”

His school’s deputy principal, Andrew Kutu, said he attributes the 75% overall pass rate the school attained last year to chess. “I can say that chess did play a major role in our performance and we want to encourage more learners to take part in it,” said Kutu.

For more information about the project, visit www.minichess.co.za or contact Marisa van der Merwe at: 082 856 3083.