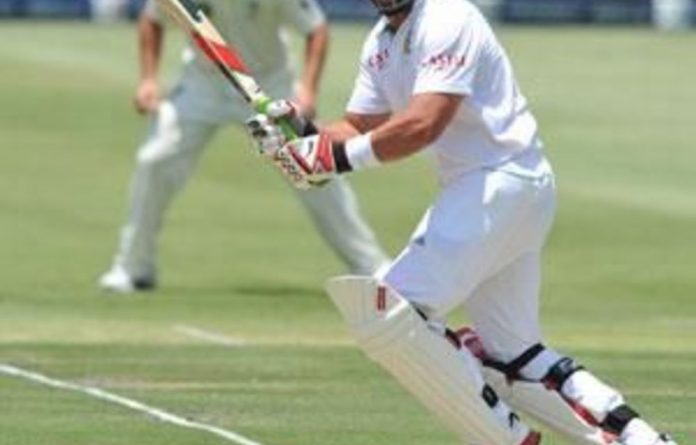 South Africa’s Jacques Kallis has become the fourth batsman to score 12 000 Test runs before his dismissal in the fourth over after lunch, on the opening day of the second Test against Australia at the Wanderers on Thursday.

The pair had added 84 runs for the fifth wicket.

Behind Sachin Tendulkar, Rahul Dravid and Ricky Ponting, Kallis had played a superb innings to reach his half-century off 37 balls, hitting seven fours and two sixes.

After achieving his milestone in Test runs, Kallis flicked the next ball off his pads to Usman Khawaja at midwicket.

Eight balls later, Hashim Amla was on his way back to the pavilion, giving youngster Pat Cummins his well-deserved first wicket in Test cricket.

The 18-year-old debutant found the outside edge of Amla’s bat and Ricky Ponting took a head-height catch at second slip.

Australia were a bowler short after Shane Watson suffered a hamstring injury in the morning session.

He left the field in the middle of an over but not before seeing to the soft dismissal of Jacques Rudolph (30).

Simple catch
After playing some magnificent shots, the ball shaved the edge of Rudolph’s bat into the gloves of Brad Haddin.

Winning the toss and opting to bat first, Proteas’ captain Graeme Smith (11) was the first man out edging Mitchell Johnson to second slip.

Johnson got the ball to swing away from the left-hander who pushed it to Michael Clarke for a simple catch.

South Africa, who lead the two-match series 1-0, were unchanged side from the first Test while Australia made two enforced changes.

Cummins came in for fast-bowler Ryan Harris, who is suffering from pain in his right hip, while Khawaja replaced Shaun Marsh, already back in Australia with a back injury. — Sapa