Behind the two-for-one fighter deal 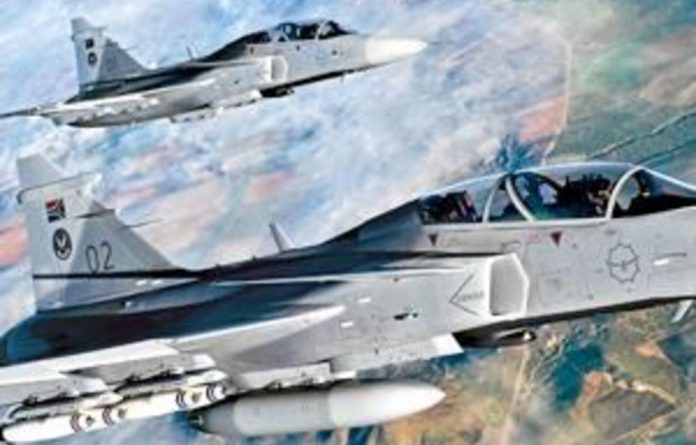 In the second extract from their newly published book on the arms deal, The Devil in the Detail — How the Arms Deal Changed Everything, Paul Holden and Hennie van Vuuren highlight puzzling aspects of the decision to buy Hawk and Gripen aircraft. The extract has been edited.

A major sticking point was that the Hawk and Gripen aircraft were going to cost so much — over half of all the money that was to be spent on the arms deal. With the focus now on acquiring two planes according to the rejigged three-tier system, rather than a single plane under the old two-tier system, the government was consequently committed to purchasing far in excess of what had initially been budgeted for, specifically the fighter planes.

So large was the burden of the Hawk and Gripen on the fiscus that the IONT (International Offers Negotiating Team) began to express concern about whether the purchase of the Gripen would be feasible or prudent. At a meeting of the Cabinet sub-committee on May 26 1999, the team, in fact, started to make the argument that the purchase of the Gripen should be shelved. Among other reasons, it pointed out that the South African Air Force had only nine pilots, meaning that if the full complement of Gripens was acquired, there would be no one to fly them.

We couldn’t afford the Gripen and didn’t even have the capacity to fly them if they were bought. This should have been a fatal blow to the Hawk and Gripen contracts: the government’s own negotiating team had run the figures, looked at the scenario and decided that buying the Gripen would be unwise, foolish and financially irresponsible if its terms could not be changed radically. Not so. The minutes of the meeting at which the team’s recommendations were discussed included a further set of recommendations.

While not rejecting its ideas outright, they argued that the decision to purchase the Gripen should be “deferred”. The team would be sent back to BAe/SAAB to discuss potential options and report back to the ministers. Most important, however, was the fact that the minutes reflected the idea that the Hawk and Gripen were an inseparable combination, they simply had to be bought simultaneously.

The chief negotiator recommended to the ministers that the decision to defer the requirement for Alfa (advanced light fighter aircraft) should be considered. This recommendation was based on the fact that the Alfa requirement was for 2005 to 2010. But the military’s requirement for a fighter programme was still valid, hence a combined Hawk and Gripen requirement could be considered as an addendum contract to a Hawk contract. The letter submitted by the department of finance to the chief negotiator was tabled and discussed by the ministers.

After a brief discussion, the ministers decided to defer the Gripen decision and to allow the negotiating team to try to conclude a single contract with BAe for both Hawks and Gripens.

This seems, at first glance, to be reasonable — why would you buy a trainer and not a fighter? But, looking more closely, it was a very strange decision. First, numerous suppliers had confirmed that pilots could move straight from the Astra trainer to an advanced fighter, which meant that, of all the things purchased in the arms deal, the Hawk was the least necessary. Surely this would have meant that the wise decision would have been to cancel the Hawk and instead go straight for a supersonic fighter with training capacity like the Gripen? By linking the two as an inseparable unit, however, it was ensured that, regardless of the cost implications, if we bought one we had to buy the other.

The second strange feature of the minutes is the question of whether they were accurate and reasonable. The draft version of the auditor-general’s report noted that “the minutes at our disposal at this stage were only signed by the secretary of the meeting, Chippy Shaik”. This may, of course, have been a mere administrative oversight, but considering the way official minutes drawn up by Shaik had earlier been contested, it cannot but raise questions as to whether this decision had actually been reached and whether the minutes were accurate.

Nevertheless, the team went back to BAe/Saab to try to negotiate a better deal. BAe/Saab rejected, off the bat, the idea of “front-loading” the delivery of offsets on the Gripen in return for the security of knowing that, if a fighter was to be bought at a later stage, BAe/Saab would be guaranteed to get the contract.

The deal that was suggested, instead, was the idea of “tranching” the acquisition. This would mean that the government would enter into three separate contractual agreements, known as tranches: the first tranche would be 12 Hawks and nine Gripen dual-seaters (at an estimated cost of R6.56-billion); the second would be 12 Hawks (R1.29-billion); and the third and final tranche would be the purchase of 19 Gripens (R5.3-billion). At any time in the procurement, the South African government would reserve the right to cancel the second and third tranches if this was necessary.

This was utterly illogical: the dual-seater Gripens were not considered to be fully combat-compliant for South African circumstances. As the affordability report noted in August 1999: “Exercising the option to cancel the single-seater Gripen in 2004 will imply a major waste of resources, as the only purpose of acquiring the dual-seater Gripen is to train pilots to fly the single-seater Gripen.” Agreeing to tranche one, therefore, meant that the SAAF and the government would be locked into going all the way to tranche three, without which the SAAF would have no fighter capacity at all.

The second major problem was how the costs of the different tranches had been arranged. Under this arrangement, BAe and Saab front-loaded the “non-recurring” costs into the first tranche. This meant that the entire set of “non-recurring” costs (such as setting up facilities and rejigging elements of both planes to meet South Africa’s specific environmental needs) would be included in the first tranche, which would, in turn, mean that the first tranche would be more expensive on a plane-for-plane basis than if all the planes were bought at once. If South Africa bought the first tranche, but not the second and third, it would suffer a heavy financial penalty of paying a fee as if production had started for all the planes in tranches one to three.

These warnings seem to have fallen on deaf ears. A few days after this picture had been painted by the affordability team, a recommendation was sent by the chief of the defence force and the acting secretary of defence (who had replaced Pierre Steyn after his resignation in 1998) to Joe Modise. The recommendation, oddly, completely ignored the findings of the affordability report and instead outlined a series of purchase options that could be pursued. One included only getting the Hawks and not the Gripens, while another suggested that the first tranching option be pursued. To get over the fact that the latter option would still have been considered unaffordable, this option suggested reducing the number of light utility helicopters to be bought from 40 to 30. At the time, the chief of the defence force was Siphiwe Nyanda, while the acting secretary was Mamatho Netsianda.

Even with the number of helicopters reduced from 40 to 30, the arms deal was still over the initial R21.3-billion that had been approved: it was still necessary to cut costs to make sure that it was affordable. In particular, the purchase of the Hawk and the Gripen, already consuming so much of the budget, would have to be rationalised.

This was achieved in two ways. First, the Hawk and Gripen contracts were treated to a bit of creative accounting. A considerable cost would have been incurred if the South African government had bought various training devices and flight simulators used to train pilots before they entered the Hawk and Gripen planes: a total of $73 436-million. The decision was made to lease the training equipment rather than buying this outright. This did not mean that it would not cost the department of defence anything, it simply meant that it was not officially part of the cost of the Hawk and the Gripen. The cost of leasing, however, would still be paid from the usual operating budget of the department of defence, which would only serve to further squeeze the defence force’s limited operational funds.

Second, it was decided that functionalities in the Gripens and Hawks would be removed. Although it is not assumed that this would have rendered them ineffective, there was the concern that they would lack certain functionalities that already existed in the Cheetah C.

In one briefing note in response to a discussion of the removal of the items, it was noted that: “The SAAF has previously stated that the — excluded capabilities remain mandatory — the required modes are already available in the Cheetah C.”

The Devil in the Detail is published by Jonathan Ball