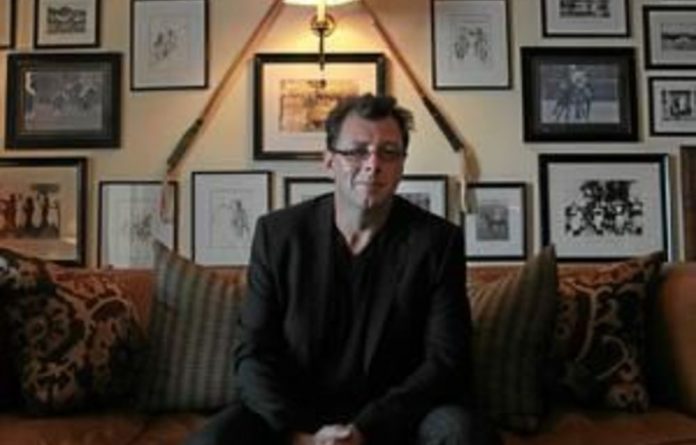 Sitting high on the Westcliff Hotel pool deck, Conn Iggulden takes a sip of tea and marvels at the panorama of Johannesburg’s man-made forest.

He is outlining his career as an author.

“Gladiator,” he says. “That was the big engine. The Russell Crowe film of 2000. All of a sudden, agents and publishers were looking for novels set in ancient Rome.” Eleven years later, he is on his first promotional tour to South Africa.

The Igguldens go back to the Domesday Book, but Conn got his first name from his Irish mother. He and his brother Hal were the kind of boys who built tree houses, to a design that came up many years later in their bestselling The Dangerous Book for Boys.

The adventurous lad grew up into a tweedy English teacher, addicted to James Clavell’s oriental epics and Wilbur Smith page-turners. Iggulden soaked up the exploits of Hornblower, Sharpe and Jack Aubrey and began his own novel about another action man: Julius Caesar. When the agent called he was halfway through it. Five publishers upped the bidding for The Gates of Rome to an advance that enabled Conn to retire from chalk-and-talk at 29.

Historical liberties
His page-turners leave out the “boring parts” and fill gaps in the record with action that suits his plot.

But Iggulden comes clean about such historical liberties in an appendix at the end of each book.

He wrote three more massive Roman novels in the Emperor series, then started on his vast canvas of the Mongol Khans. The fourth book in the Conqueror series is out already, starring Kublai Khan.

The former teacher now writes 1?000 words a day and one thick best-seller a year. Regular taekwondo sessions put him in the right frame of mind for writing energetic battle scenes. Iggulden is a family man with four children and an Italian-born wife. They holiday on the Amalfi coast of Italy when they are not at home in Hertfordshire with a ridgeback and a Jack Russell.

Asked how he writes fiction that sells like hot amagwinya (vetkoek) on a winter’s day in Soweto, Iggulden says: “There are three pillars: one, the reader must care about the character; two, the writing must be visual; and three, the plot must keep moving.”

Which is a simplification, because Iggulden fine-tunes his writing, down to the smallest element. The prose is transparent, with a high readability index based on a plain vocabulary, punchy verbs and simple constructions. Setting the scene is a matter of vivid, wide-screen brush-strokes. Characterisation is rounded enough to make the reader care about the hero. And action scenes sustain the excitement — sweeping choreographies of carnage. There is a sadism that tickles many readers — with intensified horror when it is from the victim’s point of view.

What some call “microtension” is a key element. In every scene there is something at stake, even in quiet ­dialogue. Every sentence ­creates an itch to know what will happen next. And there is never a crude ­cliffhanger.

An Iggulden epic requires research. He flew into Ulaanbaatar in Mongolia, hired a pony and a guide, then trotted off over the plains, wondering how it had felt to be a 13th-century Mongol.

He recalls: “I didn’t wash for three weeks. Strange, at that altitude you don’t seem to sweat! I drank tea with salt and butter in it and got a few calluses and sores from long hours in the saddle.”

Epic tales
His novels read almost like film scripts, rewritten for the man in the street. This they have in common with the books of Iggulden’s hero, James Clavell, who began as a scriptwriter. Iggulden says the book he has brought along to read again during his tour is Clavell’s Tai-Pan.

Has he ever consciously studied the craft of fiction?

“No, I most likely absorbed it from my early reading. Mind you, I’ve spent the last 10 years working with input from wonderful editors.”

He tells an anecdote about slaughter and imagination at a “do” he attended with his friend, Bernard Cornwell, the creator of Sharpe, and George McDonald Fraser of Flashman fame.

“Bernard said of George: ‘He’s done it, you know. Killed men. Lots. In World War II. That’s where he gets his black humour. But we have to use our imagination instead, and we tend to leave out the entrails …'”

Iggulden’s next book will take him back to Rome for the aftermath of Caesar’s murder and the rise of the Emperor Augustus. After that, he will tackle another supercolossal epic with a cast of thousands in several volumes. He has not chosen the setting but it will not be Africa. Smith got there before him.

See a review of Conqueror here.