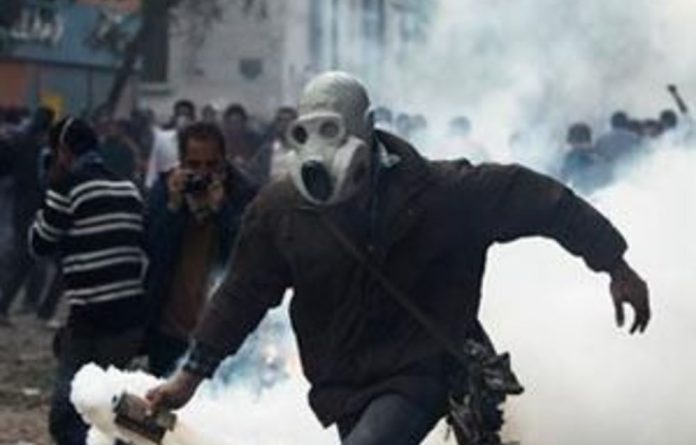 Deadly clashes broke out in Cairo’s Tahrir Square for the second day running on Sunday, kicking off a violent countdown to the first elections since Hosni Mubarak’s downfall.

Heavy clashes pitted the demonstrators against riot and military police who chased them away from entrances to the square and blocked the road leading to the interior ministry, the scene of clashes throughout the day.

Security forces later withdrew from the square but the situation remained fluid, the reporters said.

“Three people have died of asphyxiation during the clashes,” Abdallah Abdelrahman, who heads a field hospital in Tahrir Square, said.

Crisis talks
Egypt’s Cabinet held crisis talks for several hours before moving en masse to the headquarters of the ruling Supreme Council of the Armed Forces (SCAF) for another meeting, state television reported.

Throughout the day, sporadic clashes erupted near the interior ministry on the outskirts of Tahrir Square, which was covered by clouds of tear gas and littered with stones and glass.

Protesters also called for a mass rally at 3pm GMT in Suez where hundreds of police were deployed in the centre of the canal city.

They also took to the streets in nearby Ismailiya, according to a security official.

Two people were killed and hundreds injured in clashes between police and protesters on Saturday night, sparking fears of disruption in the first elections since the end of Mubarak’s 30-year-rule.

Treatment
Phased polling is due to start on November 28.

In makeshift hospitals set up in mosques around Tahrir Square, demonstrators received treatment for tear gas inhalation and for injuries from rubber bullets and birdshot.

On Saturday, protesters chanted slogans against SCAF which took power from Mubarak and demanded the ouster of Field Marshal Hussein Tantawi, his long-time defence minister who heads the SCAF.

Mohsen al-Fangari, a member of the council, insisted elections would go ahead as planned and that the authorities were able to guarantee security.

Elections
“We will not give in to calls to delay the elections. The armed forces and the interior ministry are able to secure the polling stations,” Fangari told a talk show on Egyptian satellite channel Al-Hayat.

They submitted a new transition roadmap which would see an elected constituent assembly draft a Constitution and then a presidential election held, to be followed by parliamentary polls.

The recent street protests saw the return of anti-riot police, the branch of the interior ministry most used by the Mubarak regime in its crackdown against protesters but rarely deployed since.

“Down with Tantawi,” hundreds of demonstrators cried in Tahrir Square.

Wounded
On Saturday, medics announced the deaths of Ahmed Mahmoud (23) who sustained a bullet wound to the chest in Cairo and Baha Eddin Mohammed Hussein (25) hit by a rubber bullet in the Mediterranean city of Alexandria as protests spread.

Police seized the square only to be beaten back by protesters who triumphantly retook it later, chanting “The people want to topple the field marshal” — Tantawi.

Friday had seen tens of thousands of people pack Tahrir for a rally to demand that the army transfer power to civilian rule.

The military says it will hand over power after a presidential election, which has yet to be scheduled.

“The latest news from Cairo and Alexandria has filled me with great concern. I call on all sides to refrain from any violence,” he said in a statement issued by his office.

“The Egyptian people have in recent months continuously pressed for democratic progress in their country. This must not now be put in jeopardy.” — AFP