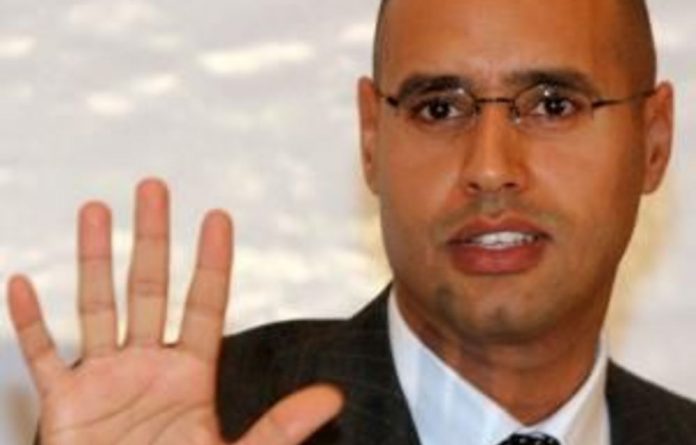 Libyan militiamen were holding Seif al-Islam in their mountain stronghold on Sunday — a day after seizing him without a fight in the southern desert and a month after his father, Muammar Gaddafi, was captured and killed.

“The final act of the Libyan drama”, as a spokesperson for the former rebels put it, began in the blackness of the Sahara night, when a small unit of fighters from the town of Zintan — acting on a tip-off — intercepted Gaddafi and four armed companions driving in a pair of 4×4 vehicles on a desert track.

It ended, after a 480km flight north on a cargo plane with the London-educated, 39-year-old heir-apparent to four decades of dictatorship held in a safe house in Zintan and the townsfolk vowing to keep him safe until he can face a judge in the capital.

The familiar sound of celebratory gunfire broke the night time silence but the town nestled in the rugged Western Mountains was otherwise quiet.

His captors said he was “very scared” when they first recognised him despite the heavy beard and enveloping Tuareg robes and turban he wore. But they reassured him and, by the time a Reuters correspondent spoke to him aboard the plane, he had been chatting amiably to his guards.

‘Lost in the desert’
“He looked tired. He had been lost in the desert for many days,” said Abdul al-Salaam al-Wahissi, a Zintan fighter involved in the operation. “I think he lost his guide,” he said.

Despite a tense couple of hours on the runway on Saturday, when excited crowds rushed the plane that flew him from Obari to Zintan — an anti-Gaddafi bastion — the fighters holding him said they were determined he would not meet the fate of his father who was killed after being seized.

Western leaders, who backed February’s uprising against Gaddafi but looked on squeamishly as rebel fighters filmed themselves taking vengeance on the fallen strongman a month ago, urged the incoming government of Prime Minister Abdurrahim El-Keib to seek foreign help to ensure a fair trial.

Keib, who taught engineering at US universities before returning to Libya to join the rebellion, drove from Tripoli to Zintan to pay homage to its fighters. He promised justice would be done but al-Islam would not be handed over to the International Criminal Court (ICC) at The Hague, which had indicted him for crimes against humanity.

New government
Keib was expected to announce a Cabinet line-up on Monday, a source in the interim administration said, meeting a deadline of Tuesday determined by a clock set ticking by Gaddafi’s death and completing the tricky task of balancing competing demands from the array of local militias now in real control of Libya.

The justice minister from the outgoing executive said the younger Gaddafi was likely to face the death penalty, though the charge sheet, expected to include ordering killings as well as looting the public purse, would be drawn up by the state prosecutor after due investigation.

Word of the capture set off rejoicing in the streets of cities across the vast, oil-rich nation of just six million. Streets echoed with gunfire from rifles but also the anti-aircraft cannon mounted on civilian pick-up trucks that became the abiding image of an eight-month civil war that ended with the ousted leader’s death in his home town of Sirte.

“Finally we beat him, after all his pointing at us with his finger on television and threatening us,” Waleed Fkainy, a militiaman on patrol in Tripoli, said of al-Islam, whose image as a potential reformer of his father’s eccentric one-man rule evaporated with his venomous response to the uprising.

“Thank God,” Fkainy said. “We lived under his threats and now we have the upper hand after this victory.”

Western leaders urged Libya to work with the ICC, which has also issued an arrest warrant for al-Islam, on charges of crimes against humanity during the crackdown on protesters.

Amnesty International and Human Rights Watch both called on Libya to hand him over to the ICC and guarantee his safety.

But Libya’s interim justice minister Mohammed al-Alagy said al-Islam would be tried inside Libya for serious crimes that carry the death penalty.

Keib said Libya would make sure Gaddafi’s son faced a fair trial and called his capture the “crowning” of the uprising.

‘Very scared’
“We assure Libyans and the world that Seif al-Islam will receive a fair trial … under fair legal processes which our own people had been deprived of for the last 40 years,” Keib told a news conference in Zintan.

Al-Islam, who had vowed to die fighting, was taken without a struggle — possibly as he tried to flee to Niger — officials said.

“At the beginning he was very scared. He thought we would kill him,” Ahmed Ammar, one of his captors, said.

Al-Islam told the Reuters reporter on his plane a bandaged hand had been wounded in a Nato air strike a month ago. Asked if he was feeling all right, he said simply: “Yes”.

The Zintan fighters, one of the most powerful of the militia factions that hold effective power in a country still without a government, said they planned to keep him until they could hand him over to authorities.

Stolen billions
Keib praised the militia and said Gaddafi’s son remained in the hands of “the revolutionaries in Zintan”, acknowledging the authority the militia continued to hold over its territory.

Zintan could use al-Islam as a bargaining chip in the contest between rival groups for power. Zintan fighters made the decisive push on Tripoli which ended Gaddafi’s rule and they want to make sure their contribution is recognised.

Libyans believe al-Islam knows the location of billions of dollars of public money amassed by the Gaddafi family.

Ammar told Reuters that his unit of 15 men in three vehicles, acting on a tip-off about a possible high-profile fugitive, had intercepted two cars carrying Gaddafi and four others in the desert about 70km from the small oil town of Obari at about 1:30am.

After the fighters fired into the air and forced the cars to stop, they asked the identity of the passengers. Al-Islam replied said he was “Abdelsalam” — a name that means “servant of peace”, according to the fighters, who recognised him.

Hand him over
“The capture presents a challenge to the NTC [National Transitional Council]. If they want to try Seif, what can they do to make Zintan hand him over?” said Control Risks analyst Henry Smith, referring to Libya’s interim government.

Smith said al-Islam, once seen as a reformer who engineered his father’s rapprochement with the West, appeared to have been hiding in the desert since fleeing the tribal bastion of Bani Walid near Tripoli in October.

“The best thing that the new leadership can do is to hand Seif al-Islam to the ICC because I don’t believe it really has the resources and the means to try Seif al-Islam and give him a fair trial,” Fawaz Gerges, professor of international relations at the London School of Economics, where al-Islam studied, said.

Asked about the chances of that, he said: “Almost zero”. He said he expected al-Islam to be sentenced to death and executed. “This is unfortunate for the new Libya,” he said.

There was no word of the other official wanted by the ICC, former intelligence chief Abdullah al-Senussi. — Reuters

The chief justice needs to publicly account for his comments, by either walking them back or explaining his change of heart on international law and its institutions
Read more
Analysis

Self-diagnosis and symptoms are recipe for paranoia — just see the doc, take the meds and Bob’s your uncle
Read more
Africa