Calls for change in format of President’s Cup 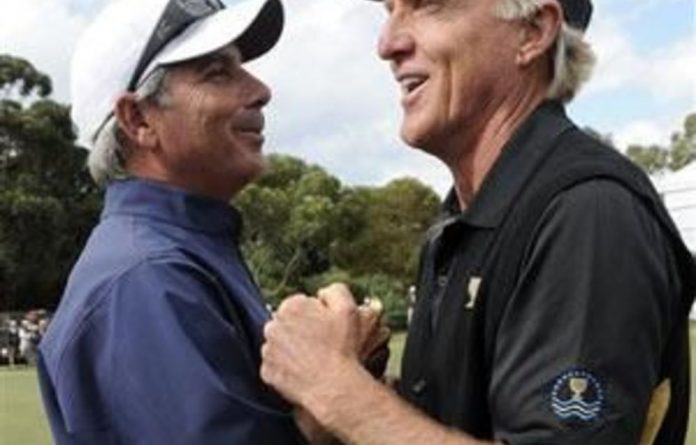 The international team trailed 4-2 after the opening session in the President’s Cup and never caught up. That’s how it was two years ago at Harding Park, in 2007 at Royal Montreal.

Norman said if he could change anything about the President’s Cup, it would be to give the host team the option of deciding the schedule of play and giving the international side four captain’s picks instead of two.

“We do get our cage rattled a little bit in the foursomes match,” Norman said after the Americans won the cup for the fourth straight time. “And it does rattle us because we don’t like getting beaten. … What’s wrong with the host nation having the choice of format, anyway?”

That’s how it’s done in the Ryder Cup, which effectively pits the PGA Tour against the European Tour.

Quirky format
Foursomes — or alternate shot — has been the lead-off session every time since 1998 at the President’s Cup and it’s a format that has clearly favoured the Americans in recent years.

They have won 25.5 points out of 33 foursomes matches dating to 2007, including 8-3 this year. Norman believes if the four balls session were first, perhaps the international team could gain some confidence.

Paul Azinger had the Ryder Cup begin with foursomes in 2008 and it was the lone American victory in the last 10 years.

Why do the Americans do so well in foursomes? Norman believes it’s because of their experience from playing the quirky format every year in the Ryder Cup and President’s Cup. Then again, the foursomes format only began getting lopsided toward the Americans in 2007.

The bigger question is why the international team does so poorly.

‘Find other players’
It was headed for a 3-3 opening session in foursomes until two teams — Geoff Ogilvy and Charl Schwartzel, and Aaron Baddeley and Jason Day — lost late leads and had to settle for halves.

“How do we fix it?” Ernie Els said. “I think we are so bad at it and every year we start the Presidents Cup with foursomes. Especially if we have a home-field advantage, why don’t we start with something different? Maybe that’s the answer.”

US captain Fred Couples had a different solution.

“They may need to find other players to play. That’s pretty simple,” he said. “The internationals need to go play another format somewhere. In years coming up, maybe they will have another tournament where they play an alternate shot or whatever.”

Tight match
Ogilvy and Bill Haas had a tight match to the finish, neither player up by more than one hole. Ogilvy holed a 15-foot birdie putt to halve the 17th hole and take a 1-up lead to the 18th.

Haas was still short of the green in three and chipped close for a conceded bogey. Ogilvy was 15 feet away for birdie, meaning he could take three putts and still win the match. In most cases, that putt would be conceded.

Haas made him putt it — not out of spite, but out of sportsmanship.

“He wanted me to hole in front of the crowd and get the crowd fired up,” Ogilvy said.

“When you know you have three putts, it’s hard to line up properly,” he said. “You know you want to finish and get to your teammates, which is what this is all about.”

Solemn
No one looked more solemn among the international team than Robert Allenby, who made it into the President’s Cup record book twice this week for all the wrong reasons.

Allenby was the only player on either team who failed to contribute a point.

He was a captain’s pick by Greg Norman because of his success on the sand belt courses, particularly Royal Melbourne. Instead, Allenby joined John Huston in 1998 as captain’s picks who were shut out.

His last chance came on Sunday and it was the shortest match of the day. David Toms beat him, 7 and 5.

‘It’s about results’
Allenby didn’t play all that badly and especially with team matches, it’s hard the loss goes to two guys. In his Saturday morning foursomes, Geoff Ogilvy twice hit tee shots into the bushes that took them out of the hole.

“The results don’t show how I played,” Allenby said. “But at the end of the day, it’s about results.”

The other record? With four losses, Allenby now has 17 losses, the most by any player in the President’s Cup. — Sapa-AP

African leaders are more constrained by democratic rules than you think