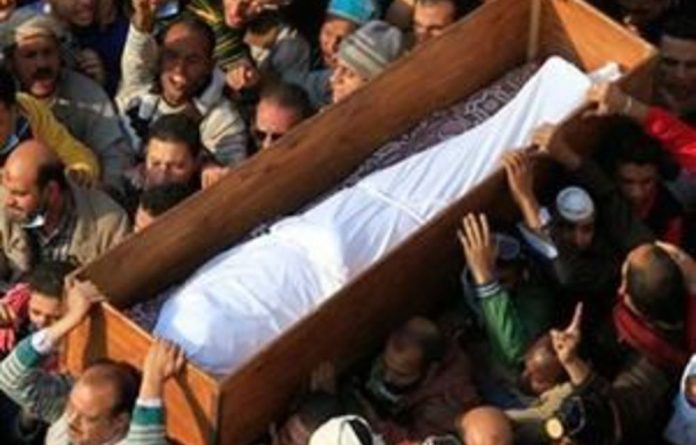 Egyptians frustrated with military rule battled police in the streets again on Tuesday as the generals scrambled to cope with the Cabinet’s proffered resignation after bloodshed that has jolted plans for Egypt’s first free election in decades.

Thousands of people defied tear gas wafting across Cairo’s Tahrir Square, the focus of protests that have swelled since Friday into the gravest challenge yet to the generals who replaced Mubarak and who seem reluctant to relinquish military power and privilege.

The army council, headed by a 76-year-old field marshal who served as Mubarak’s defence minister for two decades, was due to meet political parties to discuss the crisis, in which at least 36 people have been killed and more than 1 250 wounded.

The United States, which gives Egypt’s military $1.3-billion a year in aid, has called for restraint on all sides and urged Egypt to proceed with elections due to start on Monday despite the violence, a stance broadly echoed by many European leaders.

‘Save Egypt’
Protesters waving flags and singing songs skirmished with security forces in and around Tahrir Square, where banners read “Save Egypt from thieves and the military” and “Handing power to civilians is the demand of all Egyptians”.

Youth groups have called for a mass turnout later in the day to press demands for the military to give way to civilian rule now, rather than according to its own ponderous timetable, which could keep it in power until late 2012 or early 2013.

Security forces put up barbed wire on streets leading from Tahrir to the Interior Ministry, but an army officer on the spot said protesters had repeatedly removed the makeshift barriers.

Tantawi and his colleagues will not formally accept the resignation of Prime Minister Essam Sharaf’s government until they have agreed on a new premier, an army source said.

It was not clear if the army would try to replace the whole Cabinet — a tough challenge with polling only days away — or just ditch the unpopular interior and information ministers.

Shadow over elections
The army council has vowed to proceed with the parliamentary election due to get under way on Monday, but the bloody chaos in the heart of Cairo and elsewhere has thrown plans into disarray.

The powerful Muslim Brotherhood, which anticipates a strong showing in the election, will attend the meeting with the military council, scheduled for midday (10am GMT) with four other parties. Four presidential candidates will also be there.

“We demand that elections are held on time,” said Emad Abdel Ghafour, head of the Salafi Islamist Nour (Light) party. He also demanded the removal of the interior and information ministers.

Presidential candidate Amr Moussa said he hoped for agreement on holding the parliamentary elections on time and for a presidential vote to take place no more than six months later.

The army’s timetable calls for completion of parliamentary elections in March, followed by a six-month period to draw up a constitution before presidential elections are held.

‘Guardianship’
Beyond Cairo, violence has accompanied protests in the northern city of Alexandria, where the state news agency MENA said 40 members of the security forces were wounded on Monday, and the Suez Canal port of Ismailiya, where state radio said three people were killed and 60 wounded the same day.

But nationwide demonstrations against army rule have yet to match the vast numbers that turned out to topple Mubarak.

In Tahrir, activists sought to control access to the square. Volunteers on motorbikes ferried casualties from the skirmishes with security forces firing tear gas near the Interior Ministry.

“They want to trap us in the square to hurt our morale and they’re doing it inch by inch,” said protester Gamal el-Hawy.

A doctor at a makeshift clinic in Tahrir reported about 20 casualties, many of them hit by rubber bullets.

The Youth Revolution Coalition, an activist alliance, said on its Facebook page that the military council had “no constitutional, revolutionary, moral or national legitimacy”.

“We will not give up on a demand for a coalition government that has real powers and setting a date for presidential elections before the end of April,” the statement added.

It said elections should be held on time for a parliament free of any “guardianship”, code for army supervision. Judicial powers should be exclusively in civilian hands, it added.

Army rule under fire
Many Egyptians respect the army and praise its role in easing Mubarak out on February 11. But tolerance for army rule has worn thin, especially after attempts to set up constitutional principles that would keep the military beyond civilian control.

On Monday night the army council called for calm and voiced its “deepest regret” for the casualties so far.

Islamist presidential candidate Hazem Salah Abu Ismail, who had joined the protests in Tahrir Square, described the apology as worthless. “I call on them to step down,” he said.

Political uncertainty has gripped Egypt since Mubarak’s fall, while sectarian clashes, labour unrest, gas pipeline sabotage and a gaping absence of tourists have paralysed the economy and prompted a widespread yearning for stability.

Several banks in central Cairo were closed on Tuesday as a precaution against looting, the state news agency said.

Amnesty International said the military had made only empty promises to improve human rights. Military courts had tried thousands of civilians and emergency law had been extended.

Torture had continued in army custody, and there were consistent reports of security forces employing armed “thugs” to attack protesters, it added in a report.

“The SCAF has continued the tradition of repressive rule which the January 25 demonstrators fought so hard to get rid of,” said Philip Luther, Amnesty’s Middle East and North Africa acting director. — Reuters