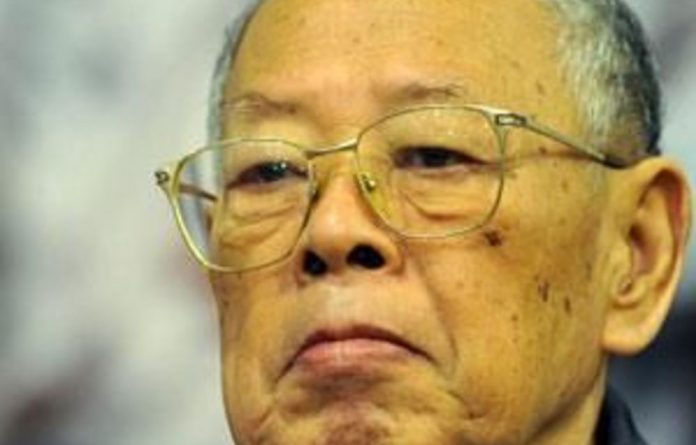 A top Khmer Rouge leader on trial at Cambodia’s war crimes court was on Tuesday confronted with dramatic footage in which he defends the regime’s bloody purges and calls the victims “traitors”.

Prosecutors say the clip from the 2009 documentary Enemies of the People shows the 1970s movement had a policy of killing enemies and those it regarded as disloyal.

Nuon Chea, seen as the regime’s chief ideologue, showed no emotion as the short clip of him was shown on the second day of opening statements in the trial at the UN-backed court in Phnom Penh.

“Brother Number Two” Nuon Chea and two other defendants all deny charges of war crimes, crimes against humanity and genocide for the deaths of up to two million people during the Khmer Rouge’s 1975-1979 reign of terror.

“To this day, Nuon Chea insists that the people they murdered … were all enemies or traitors,” said international co-prosecutor Andrew Cayley of the mass executions.

Healing wounds
He showed the packed courtroom and public gallery a scene from the award-winning film in which Nuon Chea tells a Cambodian journalist why there were so many purges.

“If these traitors were alive, the Khmers as a people would have been finished so I dare to suggest our decision was the right one,” he said calmly on camera.

“If we had shown mercy to the people, the nation would have been lost.”

Their long-awaited case, the tribunal’s second and most important, is seen as vital to healing wounds in the still-traumatised nation.

Missing from the courtroom is the fourth accused Ieng Thirith — the regime’s “First Lady” and the only female leader to be charged by the court — after she was ruled unfit for trial last week because she has dementia.

‘Smashing’ enemies
Led by “Brother Number One” Pol Pot, who died in 1998, the Khmer Rouge emptied cities, abolished money and religion and wiped out nearly a quarter of Cambodia’s population in a bid to create an agrarian utopia.

Owing to fears that not all of the accused, who are in their 80s and suffer from various medical ailments, will live to see a verdict, the court recently split their complex case into a series of smaller trials.

But during opening statements this week the prosecution and the defence may address all of the accusations against the three.

On Tuesday, Cayley said convicted Khmer Rouge prison chief Duch, who was sentenced to 30 years in jail last year for overseeing the deaths of some 15 000 people in the tribunal’s first case, would be a key witness to support his evidence of the “smashing” of perceived enemies by the paranoid regime. — AFP