Mac Maharaj and controversy: A timeline 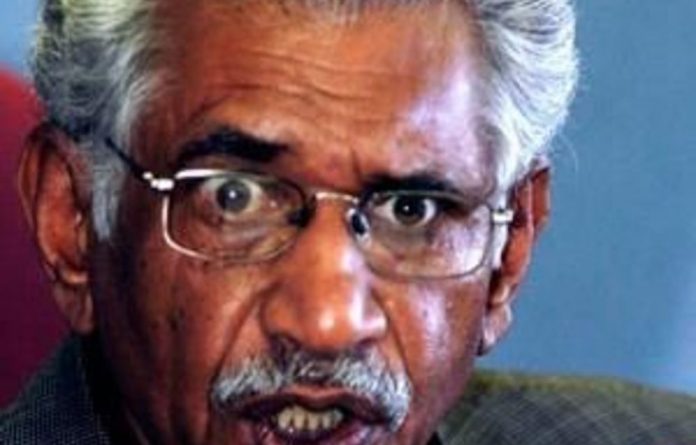 ANC stalwart Mac Maharaj has dismissed recent media reports suggesting he lied about his involvement in corruption linked to the controversial arms deal, deflecting the claims as being part of a media campaign to discredit him. Although seemingly above reproach during a political career that saw him serve as democratic South Africa's first transport minister from 1994 to 1999, the Mail & Guardian tracks the ups and downs of his political career since the advent of democracy.

November 1 2001 – Political magazine Noseweek is the first to report Maharaj's involvement in the awarding of a multibillion-rand tender in the late 1990s to Schabir Shaik's company Nkobi Investments for work that would be carried out on the N3 highway. This was followed up by an R400-million contract for the production of specialised driver's licence cards to Nkobi alongside French arms company Thomson-CSF (later renamed Thales) and South African arms provider Denel.

February 16 2003 – The Sunday Times exposes alleged payments made by Shaik to Maharaj via his wife, Zarina Maharaj. Financial documents show that Shaik channelled a total of R525 352 through his companies to Zarina's company, Flisan Investments, between May 1998 and February 1999. In addition to this, the paper reported that Shaik sent the Maharaj family on a trip to Disneyland in July 1996. Maharaj made no attempts to disclose the payments or gifts while serving as minister.

March 24 2007 – The City Press reveals further details of payments to Maharaj and his wife by Shaik. Payments were allegedly made to a Banque SCS Alliance account belonging to Zarina by Minderley Investments — a company set up by Shaik when still at the helm of Nkobi Investments.

November 18 2011 – The publication of a Mail & Guardian story is halted on threat of prosecution by Maharaj. The gagged report alleged that Maharaj lied to the Scorpions during a section 28 inquiry into his involvement in the arms deal. The story was published with large black print covering sections of the article that were deemed by Maharaj's attorneys as contravening the National Prosecuting Authority Act that makes it an offence to disclose evidence gathered in camera by a section 28 inquiry, in which individuals can be subpoenaed to testify under oath.

November 19 2011 – Maharaj formally lays charges against the M&G along with senior reporters Sam Sole and Stefaans Brümmer for allegedly obtaining evidence provided by Maharaj in the NPA inquiry unlawfully.

November 20 2011 – The Sunday Times reveals further evidence of nefarious payments made to Maharaj via an overseas bank account in his wife's name. The report hinges on a consultancy agreement between French arms company Thales (formerly Thompson CSF) and Shaik's Minderley Investments. The agreement details secret payments amounting to R2.3-million into Zarina's account only months before the awarding of the dodgy tender reported on by Noseweek in 2001.