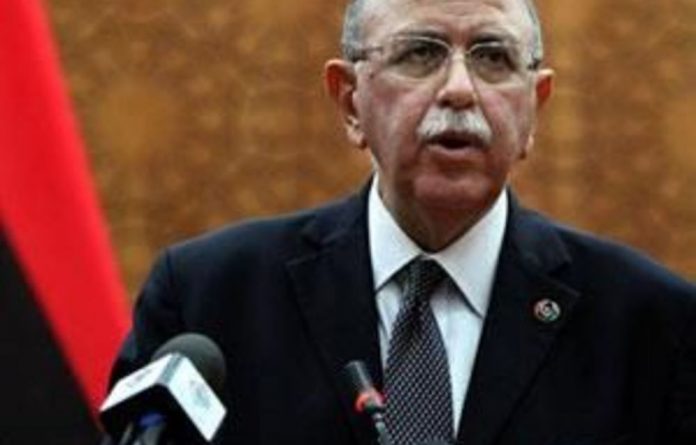 Libya’s National Transitional Council (NTC) named a new government on Tuesday with a line-up that dropped several seasoned officials in favour of appointees who will soothe rivalries between regional factions.

On a visit to Tripoli, the International Criminal Court’s (ICC) chief prosecutor conceded that the captured son of Muammar Gaddafi, Saif al-Islam, may be tried in Libya rather than in The Hague, meaning he faces the death penalty if convicted.

The NTC faced the tricky task of forming a government which would reconcile regional and ideological interests whose rivalry threatens to upset the country’s fragile stability, three months after the end of Gaddafi’s 42-year rule.

“All of Libya is represented,” Prime Minister Abdurrahim El-Keib told a news conference as he unveiled the line-up. “It is hard to say that any area is not represented.”

Western countries, which backed the revolt against Gaddafi and have a big stake in seeing his replacements succeed, welcomed the new government, saying it would guide the oil exporting country towards democracy.

‘A big surprise’
The NTC’s choices to fill ministerial posts appeared to have put regional affiliation ahead of experience or a track record.

Foreign diplomats had been expecting the foreign minister’s job to go to Libya’s deputy envoy to the UN, Ibrahim Dabbashi.

A respected diplomat, he had rallied other Libyan officials to turn against Gaddafi soon after the revolt erupted against his rule.

Instead, the job was given to Ashour Bin Hayal, a little-known diplomat from the eastern city of Derna, a long-standing anti-Gaddafi stronghold.

“Until the prime minister made his announcement, every diplomat in Tripoli was expecting Dabbashi as foreign minister. It’s a big surprise,” said one diplomat. “We don’t know him [Bin Hayal] at all. We are trying to find out where he is.”

Staked his claim
Ali Tarhouni, a US academic who returned from exile to manage the oil and finance portfolios in the rebellion against Gaddafi, had no role in the new government.

The new Cabinet will include as defence minister Osama Al-Juwali, commander of the military council in the town of Zintan.

Juwali appeared to have staked his claim to the job after his forces captured al-Islam at the weekend and flew him to their hometown, instead of transferring him to the capital.

A spokesperson for the European Union’s foreign policy chief, Catherine Ashton, said after the Cabinet was named, the EU was “confident that the interim leadership now in place will enable the country to embark on the political transition ahead.”

Symbolic step
In a symbolic step for Libya, a deeply conservative Muslim society, the Cabinet included two women, heading the ministries of health and social affairs. El-Keib said those appointments showed women enjoyed more equality than ever before.

Absent from any strategic jobs in the government were the Islamists who were persecuted under Gaddafi but have been gaining in power since his downfall. Their rise has worried secularist Libyans and some neighbouring countries.

A month after Gaddafi was captured and killed, Libya is wrestling with the task of building new institutions out of the wreckage of his one-man rule when corruption was rampant and state institutions were left to decay.

Al-Islam, the last of the former Libyan leader’s sons whose whereabouts were still unknown, was captured on Saturday in an ambush deep in the Sahara desert.

An NTC official called his arrest “the last chapter in the Libyan drama”.

“Saif [al-Islam] is captured so we are here to ensure cooperation. Now in May, we requested an arrest warrant because Libyans could not do justice in Libya. Now as Libyans are decided to do justice, they could do justice and we’ll help them to do it, so that is the system,” he told reporters on his arrival in Tripoli.

“Our [ICC] acts when the national system cannot act. They have decided to do it and that is why we are here to learn and to understand what they are doing and to cooperate.”

Libyan officials have promised a fair trial but the country still has the death penalty on its books whereas the severest punishment the ICC can impose is life imprisonment.

“The law says the primacy is for the national system. If they prosecute the case here, we will discuss with them how to inform the judges and they can do it. But our judges have to be involved,” said Moreno-Ocampo.

An official in Zintan said steps were already underway for al-Islam’s prosecution. “A Libyan prosecutor met with Saif [on Monday] to conduct a preliminary investigation,” said Ahmed Ammar. — Reuters