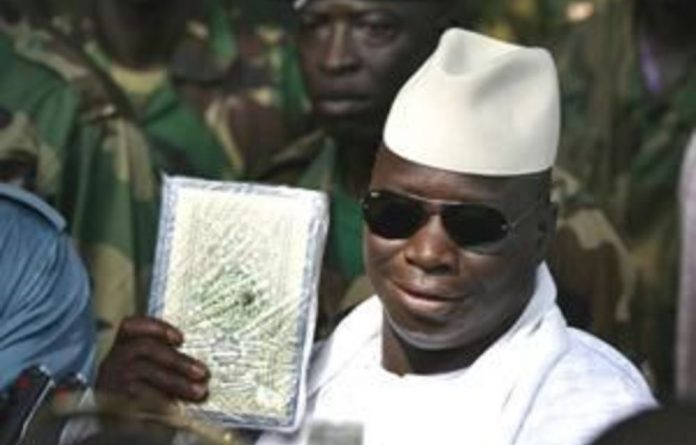 Using marbles instead of ballot papers, some 800 000 Gambians will vote on Thursday by dropping a clear glass ball into one of three different coloured drums representing the presidential hopefuls in the tiny nation on the west coast of Africa.

Most will land in the green drum, which represents incumbent, a close friend of Jermaine Jackson and self-proclaimed mystic who says he can cure Aids — but only on a Thursday.

Since taking power in a bloodless 1994 coup, Yahya Jammeh has swapped army fatigues for white gowns and a sceptre, holding sway through a potent mixture of state brutality and mysticism.

International rights groups have repeatedly pointed the finger at his authoritarian regime. In 2000, at least 14 people were killed during an anti-government rally while an opposition leader was jailed in 2006 for using a microphone without official permission.

He claims powers to cure a long list of maladies including obesity and erectile dysfunction and in 2007 hundreds of people with HIV flocked to Jammeh’s Thursday-only Aids clinic in Banjul, the capital. A UN envoy who questioned it was booted out. Jermaine Jackson, brother of the late Michael and a former Jackson 5 member, said the president was a man of “truth and logic” after a 2010 visit in which he decided his ancestors had come from Gambia.

The bell rings
Best known for palm-fringed beaches that attract thousands of European winter sun-seekers, Africa’s smallest mainland nation is also one of its most autocratic. Jammeh, whose face is used to advertise everything from food to phone credit, has cemented his 17-year reign by dishing out death sentences and gifts. He is expected to win Thursday’s vote hands-down.

To deter multiple voting, electoral monitors listen closely to the sound of a bell that rings out as each marble drops, making sure there is only one. Modelled on traditional arrangements used in much of Africa, the system was introduced in 1965 for a population with illiteracy rates topping 75%. That’s down to 55% thanks partly to Jammeh’s efforts to improve schools.

Aminata Hydara, a beneficiary of a government scholarship in Brikama, east of Banjul, will vote for him. “He has constructed roads, hospitals … the only way for Gambians to say thank you to him is to vote massively for him.” There were, she said, few signs of the two opposition candidates on the campaign trail.

In 2008 Jammeh threatened to “cut off the head” of gay people in Gambia. The following year, up to 1 000 villagers were rounded up as suspected witchdoctors behind the death of the president’s aunt.

They were forced to drink hallucinogens and beaten, Amnesty International said.

“It’s a foregone conclusion Jammeh will win,” said one journalist in Banjul. Speaking in hushed tones, the journalist, who has been detained in the past, added: “We have to be very tactful, anything we say can be used against us.”

Senegal, which envelops Gambia, has accused it of trying to ship weapons from Iran to separatist rebels in the Casamance region. Over a dozen carts of Iranian weapons headed to Gambia were seized in a Nigerian port last year.

Jammeh retired from campaigning this week, saying God had decreed he would win. —

This week a spotlight is shone on a potential interest rate hike, inflation statistics and retail trade sales
Africa

The legal challenge to Zimbabwean Exemption Permit deadline in December is being led by the controversial Simba Chitando, who is the head of Zanu-PF’s Sandton branch and whose uncle is Zimbabwe’s mining minister
National