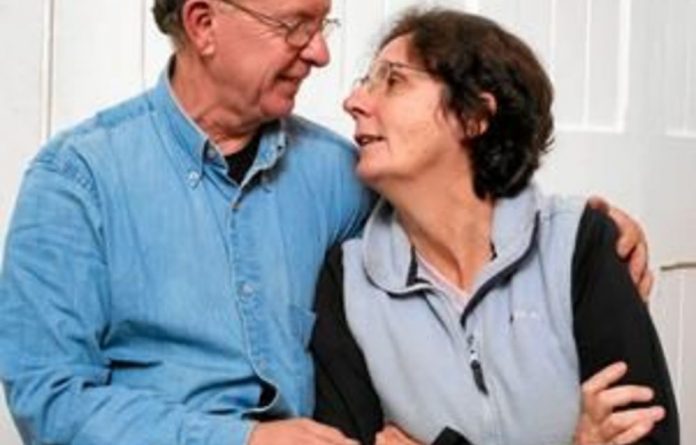 I met Elaine at my sister’s 21st birthday. She was a police officer and came straight from a shift, but she threw herself into the party. At the end of the night she said: “I’m going canoeing in the park in the morning, meet me there.” And that was it. We have been married now for more than 35 years, says Keith Brown.

Elaine was adventurous and sporty, and we spent our holidays walking and camping. We could not have children but I think that made us even more reliant on each other. We lived in an old house in a small village, Abberley, in central England. I was working as an engineering safety adviser and Elaine was processing insurance forms for a catalogue company.

In 2006, I started noticing subtle changes in Elaine: alterations in her behaviour patterns and character, some so small they are hard to describe. She would be a bit repetitive. She said she kept being told off for making mistakes at work but did not know why, Brown says.

At first I put it down to menopause until she started withdrawing into herself and not wanting to socialise with her friends — that was not like the Elaine I knew at all.

She insisted there was nothing wrong and, when she eventually saw our doctor, she passed all his standard memory tests. But things got worse; I would come home to find she had taken books or clothing we still used to the rubbish dump, or was cleaning the leather seats of our car with a scouring pad.

I kept a log for about a month, and when I showed it to the doctor, he agreed to refer her to a specialist. Finally, in 2008, Elaine had a brain scan, then in January 2009 we got a diagnosis — at 56 she had early onset dementia caused by the rare and fatal Pick’s disease.

Pick’s affects the frontal and temporal lobe of the brain, responsible for most of the body’s functions of speech, memory and intellect. It is unclear what caused it as there is no history of the disease in her family.

From the onset, the life expectancy of sufferers is seven years. When I was told, I sat on the sofa and cried, but at that point Elaine did not understand what was happening. She asked me: “Why are you crying?”

Although Pick’s disease is uncommon, early onset dementia affects about 16 000 people before the age of 65 in the United Kingdom — but the Alzheimer’s Society suggests the true figure could be three times this number because not everyone seeks help in the early stages.

Yet there are few support services suitable for younger, mobile people. I was just told to look online for help and information and, despite this terrifying diagnosis, we received no counselling and little help from social services or the health service, apart from our general practitioner.

I became a full-time caregiver. As well as reminding her to get dressed, and cooking and cleaning, I have to watch out for her 24 hours a day. She is easily distracted and always needs to be kept occupied, or she can become disruptive. It is hard to sleep because, if she gets up in the night, she might not come back to bed. She constantly wants to eat: I have to lock away all our food and hide papers and pens or she will chew them.

For me, it is very lonely. Your life shrinks. Our families live quite far away and Elaine cannot hold a conversation anymore. The worst time is in the evening, especially in winter. We rarely socialise now because she gets agitated in new places or with other people in the house. We watch television but I do not know how much she understands.

Living in a close community helps. Neighbours look out for Elaine, and two days a week she visits the Friends of the Elderly centre. It took her a while to settle, but there are good activities there, and people to distract her. It means I have a break, too. I go and help at the Severn Valley Railway — without the people there I would have been climbing the walls.

I could not have managed without the support of charities, but why should we have to rely on charity rather than health or social services? After Elaine was diagnosed, I was distraught, but no one helped us to find out what benefits Elaine needed, or to fill out the endless forms.

There is a desperate need for more support for people with early onset dementia, and counselling and training for their caregivers.

My worst fear is that something will happen to me — because then who will look after Elaine? If I am not with her, she can get agitated and distressed, and I would not do anything to cause her this anxiety. We are still as close as we can be in the circumstances. Of course, I still love her. I know that her essence is still there, even though the Elaine that was has gone. —

Take a header at dementia

Speak more than one language? This is what it does to your brain.