Green is the new, er, green 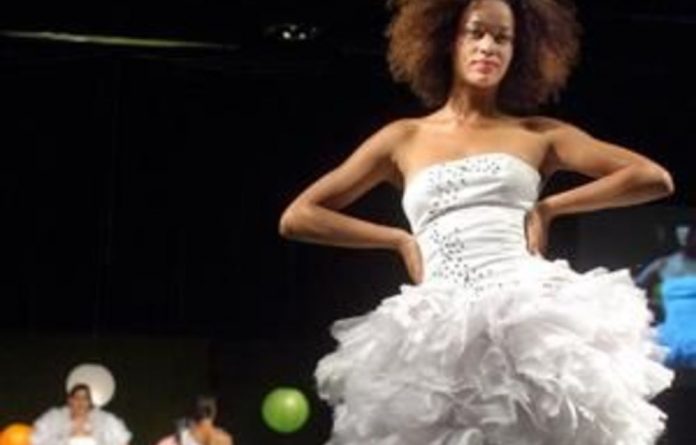 Last Friday fashion students at the Tshwane University of Technology held their annual fashion show, which formed part of a full-day seminar on fashion development and the role textiles could play in the South ­African economy.

Students are being taught to think creatively about sustainable fashion. The theme for the show, Beyond 2012, focused on ­environmental awareness and hinted at the ability of the fashion industry to adapt in the long term.

The two-hour fashion show showcased the designs of 48 third-year students. Themes ranged from Roman gladiators and sailors to rural Africa and street credibility.

British designer Stella McCartney, the daughter of Sir Paul, has provided some inspiration in the sustainable arena, being a vegan who, a decade ago, chose not to use leather or fur in her work.

McCartney’s ­support for People for the Ethical ­Treatment of Animals has highlighted the importance of creating an ecofriendly niche in the ­fashion market.

The runway for the fashion show was decked in fake grass that made one think of nature and its problems (the grass, hopefully, was made of a recycled material, but probably was not).

The university has also gained international recognition, with fourth-year ­student Christinah Steyn being featured in a recent edition of Vogue Italia in a new talent ­category.

The concerns of the fashion industry’s impact on the environment were discussed during the seminar. Speakers talked about ways of creating awareness about the importance of ecofriendly fashion and already existent strategies aiming to make a difference in a highly profit-driven
industry.

The seminar included speakers such as trend analyst and design consultant Dion Chang, who focused on the rise of the ethical consumer and the move from the fashion theme eco-ugly to eco-chic.

Fashion victims
Olivia Langhoff, campaign director of Greenpeace Africa, discussed the textile industry’s impact on water pollution. According to Langhoff’s statistics, 70% of rivers and lakes in China are polluted because of the textile industry, which uses extremely harmful chemicals to dye and bleach fabrics.

Greenpeace has cast a spotlight on the issue of toxic water pollution to get international companies to act more responsibly. Many big labels such as Adidas, H&M, Nike and Puma support the campaign and demand fabrics that are more environmentally friendly.

Tony Budden, a founding member of Hemporium, a South African hemp company dedicated to educating people about the potential of industrial hemp, spoke about the importance of using natural fibres instead of synthetic ones. Hemp is a product from a variety of the cannabis plant, grown for its fibre and seeds. Budden said hemp was ecofriendly and could easily be grown in South Africa because of the climate. He believes that the industry will help create jobs in rural and urban areas.

With these forces converging and given the generally forward-looking theme, it seems that local ecoconscious consumers may, in their lifetime, be able to flaunt their style guilt-free.

What would Rich Mnisi do?

South Africa has a bold new vision for the fashion industry