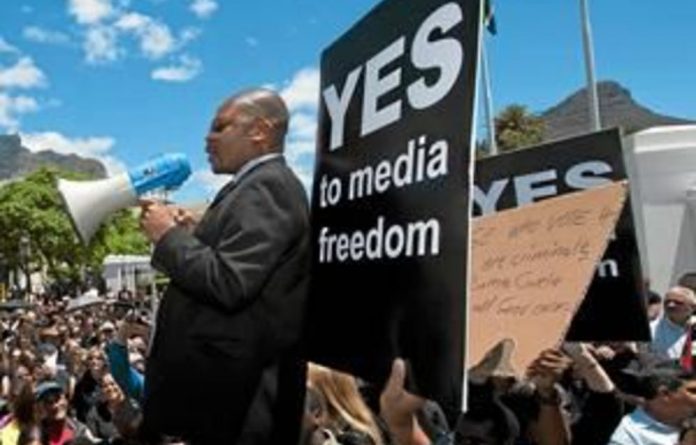 The Protection of State Information Bill will not be amended to provide for a public interest defence when it passes through the National Council of Provinces (NCOP) sources familiar with internal African National Congress debate on the Bill said this week.

However, the sources said that the ANC could agree to strengthen the public interest override in the legislation, making it easier to compel government officials to release classified information if there had been a substantial contravention of the law or there was an imminent public safety risk and the public interest in disclosure outweighed other considerations.

The National Assembly adopted the controversial legislation by an overwhelming majority on Tuesday this week.

Critics of the Bill were disappointed by the vote, after Deputy President Kgalema Motlanthe hinted to members of Parliament’s Press Gallery Association two weeks ago that the Bill might be changed at the NCOP stage to include a public interest defence.

Opponents of the Bill, including the umbrella union body Cosatu, now say they will push hard for the strengthening of the override clause in the Bill and the Protected Disclosures Act (PDA), known as “the Whistleblowers’ Act”.

Cosatu also announced on Thursday that it would take the legislation to the Constitutional Court.

A senior Cosatu member said this week that the ANC had informed the federation that there would be room for amendments at the NCOP, although a public interest defence would not be entertained.

But the unionist, who did not want to be named, said: “We’re told that the NCOP may or will consider strengthening the public interest override and may also recommend the strengthening of the Whistleblowers’ Act.”

Cosatu’s parliamentary representative, Prakashnee Govender, said that the federation would support any mechanism that maintained a balance between restrictions legitimately placed on state information and the disclosure of such information in the public interest.

Govender said: “We will support any mechanism that allows you to suspend the classification when it [the information] is in the public interest”.

Govender also said the PDA was inadequate because the protection it offered to whistleblowers could be applied only retrospectively.

She challenged the claims that the Secrecy Bill was aligned with the protection given to whistleblowers under the PDA and Companies Act.

Grounds of override
The Democratic Alliance’s Dene Smuts, a member of the parliamentary ad hoc committee considering the legislation, agreed that the override could be strengthened. “Why should it be [only] a substantial transgression [that warrants an override] and not any [single instance of] breaking of the law? Why not add other grounds for override?” Smuts asked.

She would not confirm that her party intended pushing for the strengthening of the Whistleblowers’ Act and the override clause.

The Bill states that any person who intentionally and unlawfully discloses classified information is guilty of an offence. Whistleblowers can be imprisoned in terms of the Bill for up to five years, except where the disclosure is protected under the PDA or the Companies Act, or is authorised by another law.

However Govender argued that this gives “little meaningful protection from the dampening effect that the Bill will have on the exposure of corruption”.

“The PDA provides protection to employees only and therefore excludes other individuals such as independent contractors and suppliers or recipients of services, while the Companies Act applies to state-owned companies but not government departments,” she said.

“This means that entire categories of whistleblowers would be without protection.”

Neither the PDA nor the Com­panies Act deals with information that has been classified and the Acts do not protect disclosures if access and possession of the relevant information not authorised in the first place, said Govender.

She also lamented the ANC’s so-called public consultation process, saying that Cosatu was never formally notified of any public engagements or invited to participate in them.

“We were waiting to be told when and where,” she said. “We thought there would be public announcements, people would be informed about the deadline for submission and comments, and that there would proper notification before meetings were held.”

On Thursday this week, the NCOP formed a 15-member ad hoc committee to process the Bill. The committee must report back to the council by March 8 next year.

NCOP chief whip Nosipho Ntwanambi said that public involvement and participation formed a crucial component of the council’s work and that Bill would “follow the normal processes of the NCOP of soliciting the views and comments of the public, civil society and all interested stakeholders”.