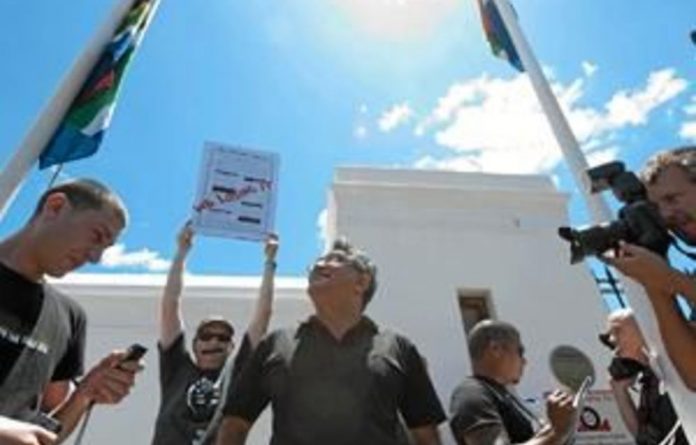 During this week’s Black Tuesday protest outside Parliament, activist Zackie Achmat lowered the South African flag to half-mast. A policeman with a roll of crime-scene tape in his hand stepped forward as Achmat was about to lower the second flag. To the crowd’s chant of “Secrecy’s for skelms! We have the right to know!”, the policeman stopped Achmat and proceeded to wrap the black and yellow tape — nature’s danger colours — around the locked gates.

An emblematic act: inside the shuttered houses of Parliament, the Protection of State Information Bill (or secrecy Bill) was being passed by a well-whipped majority.

Earlier this year, South African PEN hosted a reading to honour Liu Xiaobo, the imprisoned Chinese writer and chair of Independent Chinese PEN. We gathered about a dozen writers who read from their work. All of them had been incarcerated by the apartheid government for what they said and wrote, for the information they revealed about the injustices perpetrated by the state on its people. It was a moving event because it was a chilling reminder of just how recently South Africa was imprisoning its writers and others who spoke truth to power.

That chill was prescient. The secrecy Bill, which civil-society organisations, trade unions, the press and a handful of parliamentarians have widely rejected, is a return to the brutal forms of censorship, state control and bullying associated with the apartheid government. The draconian secrecy laws now being foisted on South Africa are a jackboot directed at the face of a human-rights culture and the democracy so carefully built and nurtured in South Africa over the past 17 years.

Nadine Gordimer, on the occasion of her recent 88th-birthday celebrations, spoke of her shock when she saw the “unbelievable sight” of the blacked-out front page of last week’s Mail & Guardian. It was, she said, only the “present example of what will happen with the passing of the Protection of Information Bill. We cannot accept censorship to blind our eyes. Tinkering with this Bill must be rejected. We must reject this Bill outright.'”

The Nobel laureate is an honorary vice-president of International PEN, to which South African PEN is one of the 144 affiliated centres worldwide. PEN brings together writers, journalists and poets in the common belief that everyone has the right to freedom of opinion and expression, that this right includes freedom to hold opinions without interference and to seek, receive and impart information and ideas through any media and regardless of frontiers.

This newly passed bill (it does have some more hoops to jump: we must make sure it stumbles) is the polar opposite of such democratic principles as freedom and openness. Governments and long-dominant political elites like to keep their skeletons closeted and now, with the passing of the secrecy Bill, their spooks have free rein. A culture of secrecy breeds duplicity, paranoia and ultimately violence. The lengthy prison sentences that this travesty of a law contains are both cruel and unusual.

The ruling, increasingly remote political elite has much to hide. This much is evident in the slew of corruption and abuse-of-power cases that have come before the public protector or the courts and have been revealed in the media. This is the impetus behind the secrecy Bill. Why else would legislation without any kind of public-interest defence, and which has provoked widespread antipathy across the spectrum of South African society, be forced through?

To force though a law that flies in the face of our hard-won Constitution, of the social and economic and political rights so many fought so hard for, is an abuse of the social contract that binds elected officials to the citizens they represent. In a democracy with a vigorous civil society and a free press, it is only with legislated secrecy that the extensive breeches of the contract between elected representatives and citizens can be hidden.