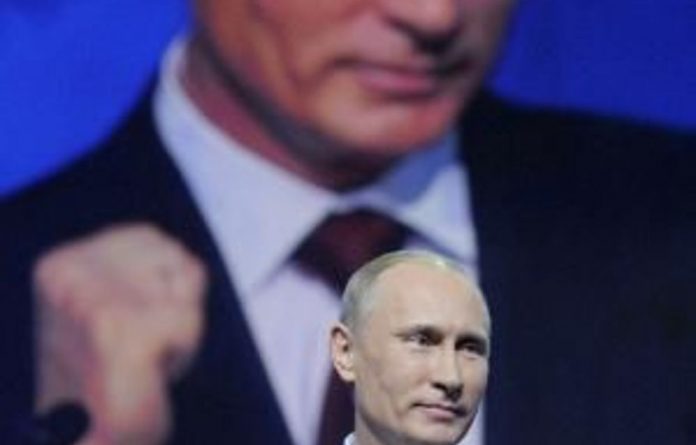 Prime Minister Vladimir Putin sternly warned the West not to interfere in Russia’s elections, as he launched his campaign to reclaim the presidency in a speech Sunday before thousands of flag-waving supporters.

Putin stepped down in 2008 after two presidential terms, but kept his hold on power. He announced in September that he intended to return to the top job next year and was formally nominated on Sunday by his United Russia party.

“All our foreign partners need to understand this: Russia is a democratic country, it’s a reliable and predictable partner with which they can and must reach agreement, but on which they cannot impose anything from the outside,” Putin told his audience.

The party congress, which was televised live, was aimed at boosting support for Putin and his party before parliamentary elections one week away.

Increasingly seen as representing the interests of a corrupt bureaucracy, United Russia has watched its public approval ratings plummet in recent months. The party is still certain to win the December 4 election, but is expected to lose the current two-thirds majority that has allowed it to change the Constitution at will.

Putin’s decision to swap jobs with President Dmitry Medvedev after the presidential vote in March, presented as a done deal at the party congress in September, also has soured the public mood. Many Russians are wary of Putin’s authoritarian tendencies and fear he will remain in power for 12 more years to become the longest-serving leader since Communist times.

Sunday’s congress began with a steel worker, a businessman, a farmer, a decorated special services officer and a noted film director standing up one after another to praise Putin as the only man capable of leading the country. The 11 000 delegates filling the Moscow sports arena chanted “Putin, Putin” and “The people trust Putin!”

Stability
Putin promised Russians stability, a word he repeated often throughout his speech. In countering criticism that he has tightened his control at the expense of democracy, Putin insisted that Russia needs a “stable political system” to guarantee “stable development” for decades to come.

“This is an extremely important task for Russia with its history of upheavals and revolutions,” he said.

He used the occasion to lash out at opposition leaders, saying they had brought the country to ruin when they served in the government in the 1990s.

“They killed industry, agriculture and the social sphere,” Putin said. “They stabbed the knife of civil war in the very heart of Russia by allowing bloodshed in the North Caucasus. In fact, they led the country to the brink of catastrophe, the edge of a precipice.”

He said Russia wants to develop cooperation with the West, but strongly warned the United States and Europe against paying too much attention to the Kremlin’s critics and providing them with financial support.

“We know that … representatives of some countries meet with those whom they pay money, the so-called grant recipients, give them instructions and guidance for what ‘work’ they need to do to influence the election campaign in our country,” Putin said.

“That’s a wasted effort, like throwing money to the winds,” he said.

Putin said those who provide grants to Russian non-governmental organisations “would do better using this money to pay back their domestic debt and stop conducting such a costly and inefficient foreign policy”.

Boost for military
Putin promised his countrymen that by maintaining a steady course they would build “a strong, rich and prosperous Russia.” Offering something for everyone, he pledged to make it easier to do business, to improve the educational system and health care, to raise taxes on the rich and to bolster the military.

“In the next five to 10 years we must take our armed forces to a qualitatively new level. Of course, this will require big spending … but we must do this if we want to defend the dignity of our country,” he said.

Putin also said he would pursue his project of forming a Eurasian Union to boost integration between Russia and its neighbours, restoring some of the links that were destroyed when the Soviet Union collapsed 20 years ago.

He offered little new to address the calls from businessmen, economists and political liberals for reforms seen as necessary for Russia to modernise its economy and further its development.

“The signals so far have certainly been: no change, more of the same, muddling along, stability even if it comes at a high cost,” said Masha Lipman, a scholar at the Carnegie Moscow Center.

She said any reforms that would increase public participation and encourage initiative are rightly seen as a serious risk for the political monopoly that Putin has established.

“Power is concentrated at the top, there is ultimately one arbiter,” Lipman said. “I see no reason why this will change.” – Sapa-AP