Maharaj lawyer: No charges against City Press — yet 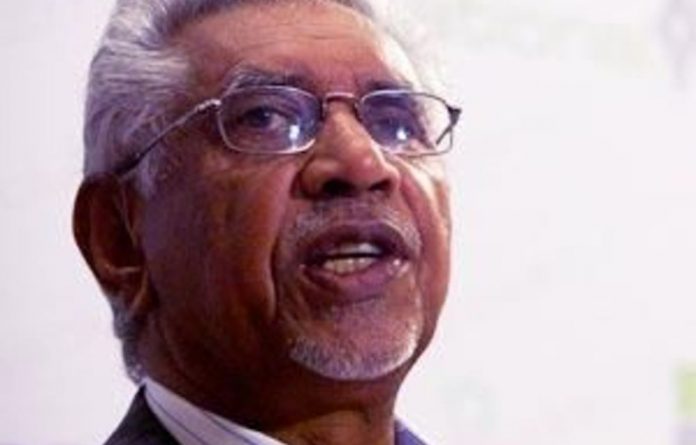 Presidential spokesperson Mac Maharaj has not yet decided whether to press charges against City Press for republishing portions of his 2003 interview with the Scorpions.

Maharaj and his lawyer have yet to discuss the City Press‘s report, which was published on Sunday.

“We have not had time to consult on the matter as I am in court today and Mr Maharaj is in Durban, so until such time as we’ve consulted conclusively on the matter I will not be able to divulge any details unfortunately,” Rudi Krause, of WDK attorneys, told the Mail & Guardian.

After that they will decide on a course of action.

“We will of course explore all avenues regarding the matter and proceed from there but I cannot confirm a time frame for that,” Krause added.

Hawks circling
At the same time, high-level investigation unit the Hawks confirmed on Monday they were yet to add the City Press to their investigations of possible infringements of the section 41(6) of the National Prosecuting Authority (NPA) Act of 1998.

“If it is proved that it is already public knowledge then it would definitely impact on investigations, but those involved are due to meet today and it will be up to them to decide what next step to take,” said Hawks spokesperson Macintosh Polela.

But the City Press is confident that it had done nothing wrong.

“We went through the risks, analysing what could happen. We’ve begun putting the meat on the bones of any possible defence we might need to employ,” Ferial Haffajee, editor of the City Press told the M&G on Monday.

“Honestly though, I don’t think it is going to happen; confidentiality is moot, because the information is old. It first went out in 2007 and all of the details of the hearing have now been well documented and I can’t see how they would continue in the pursuit of charges.”

The interview the City Press reported on was about payments to Maharaj and his wife via convicted fraudster Schabir Shaik.

On Sunday City Press questioned why Maharaj chose to lay a charge against the Mail & Guardian and investigative journalists Stefaans Brümmer and Sam Sole, for obtaining a transcript of an interview he and his wife Zarina had with the Scorpions, the now defunct investigative arm of the NPA.

The M&G wanted to report on November 18 that Maharaj allegedly lied during an interview with the Scorpions in 2003, over the payments and wanted to base the report on a transcript of the interview.

Criminal charge
But Maharaj threatened to prosecute them in terms of section 41(6) of the NPA Act of 1998, which makes it an offence to disclose information gleaned during that particular inquiry without the permission of the national director of public prosecutions.

City Press reported Krause as saying: “I can give you the assurance that should you even republish the 2007 article, we will lay a criminal charge against you and the newspaper …

“Should you publish now, it will serve to confirm that you or the newspaper are still in the unlawful possession of the documentation.”

On Saturday November 19, Maharaj laid a charge at the Parkview police station in Johannesburg based on the alleged unlawful obtaining of the documents.

The interviews were reportedly conducted during an interview with the Scorpions in terms of section 28 of the NPA Act of 1998.

This interview grants the subject immunity from prosecution for implicating themselves, provided they tell the truth.

The City Press on Sunday said it could not understand why Maharaj did not lay similar charges against the paper when it originally published the information in question.

The reports so far say that money was transferred to accounts associated with Maharaj and his wife Zarina and that the transfers were around the time of milestones being reached in certain contracts being negotiated in the transport department when Maharaj was transport minister.

Bidders included French arms and technology company Thomson CSF, now Thales, and a company of Zuma’s former financial adviser, Shaik, and the accounts the payments to the Maharaj’s came from had links with Shaik’s company accounts.

Last week at the National Press Club, Maharaj said: “I have not been involved in corruption, bribery or broken any law.”

He took issue with the amount of time the M&G gave him to respond to the paper’s questions, and suggested there was an ulterior motive to “renewed” investigations.

“Given that at the National Press Club I refused to speculate about the ‘coincidence’ of the renewed investigations relating to my wife and me by certain newspapers over the last two months, and given the sudden outpouring of articles and reports calling on me to resign my job and/or for President Zuma to dismiss me, and in the light of your first question, it now appears to me that the real target of this ‘renewed’ interest is not Mac Maharaj but President Zuma and his administration.”

A spokesperson for the Hawks, who are investigating the case Maharaj opened, was not immediately available to comment.

The M&G has written to the NPA asking for permission to use the transcripts. — Sapa

The ANC has used its power to create networks of patronage. And this means going after corruption will cost the party financially
Read more
Advertising