Embattled Cain presses ahead with US campaign 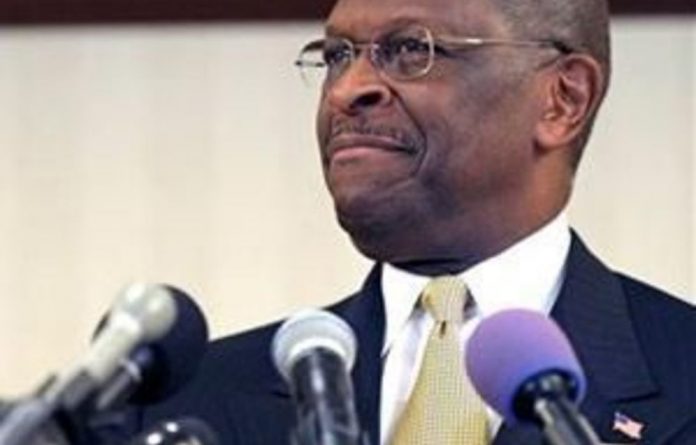 Republican Herman Cain ploughed ahead with his struggling US presidential campaign on Wednesday, vowing not to be pushed out of the race by allegations of an extramarital affair and calling the charges “character assassination”.

At three campaign stops in Ohio, Cain said his supporters were sticking with him despite the latest controversy. He accused his critics of trying to bring down his upstart White House bid.

“They want you to believe that with enough character assassination on me that I will drop out,” a defiant Cain said in Dayton, Ohio, drawing a chorus of “boos” and shouts of “No” from the crowd.

“One of the reasons they want to try and shoot me down and tear me down is because of the strength of my message.”

Cain said he will decide within “several days” whether to stay in the race to be the Republican challenger to President Barack Obama in 2012.

In an interview with Fox News, he said the controversy was taking an emotional toll on his wife and family and that would be a big factor in his reassessment.

Cain (65) denies having an affair with Ginger White, a 46-year-old corporate executive who says their 13-year, on-and-off relationship began in the mid-1990s. He said he thought she was a friend and he was simply giving her financial assistance.

The former pizza company executive, who led the Republican race barely more than a month ago, has nose-dived in polls after a series of sexual harassment charges and campaign missteps.

He told reporters in Ohio there was “a groundswell of support” for his candidacy after White’s claims. The new disclosures have not sparked widespread defections, although two state representatives in New Hampshire have backed off.

“The feedback that I am getting from these events today is don’t let the character assassination get you down,” Cain told reporters after the final event in Columbus, Ohio. “It’s been standing-room only all day. They are not allowing all of that stuff to dampen their enthusiasm.”

‘More convinced’
Some of those in Ohio who came to hear Cain speak said they were willing to give the candidate a chance.

“I am more convinced than I ever was. I believed him and I am going to donate to him and vote for him,” said Christine Bolte (46) a substitute teacher who is working as a cashier at Walmart to help pay her bills.

The allegation of an affair comes five weeks before Iowa kicks off the state nominating contests, giving Cain little time to resurrect his once high-flying campaign.

Cain also has been hit by sexual harassment charges from four women and stumbled recently on the campaign trail. He raised alarm among conservatives with confusing comments about abortion and badly fumbled a question on Libya policy.

A Reuters/Ipsos poll found Cain’s departure would do little to change the race, with his depleted support carved up among the field. Top rivals Mitt Romney and Newt Gingrich would gain the most, with bumps of about 3 percentage points each, while other contenders would pick up slightly less.

“I’ve received gifts and money for the past two and a half years, consistently,” White said, adding Cain also took her on several trips. But she said he sought nothing in return.

“This was not sex for cash,” White said.

“Just up until last week, that was my last contact with Mr Cain,” said White. She did not disclose what was discussed in the text exchanges but said Cain did not try to stop her from speaking out. — Reuters