Arms deal: Bell was deaf to bribes and lost out 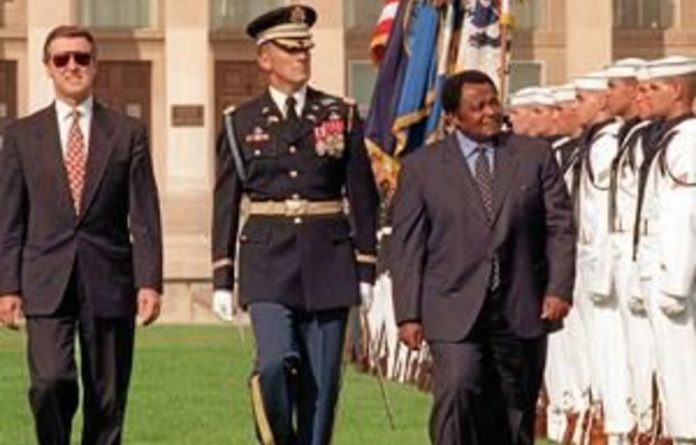 In the third edited extract from The Devil in the Detail — How the Arms Deal Changed Everything, Paul Holden and Hennie van Vuuren analyse the helicopter contract, revealing claims that two senior executives of American manufacturer Bell were solicited and had their phones tapped by intelligence and how their failure to pay incentives led to them losing the helicopter contract to Italian-based Agusta.

A number of figures attached to the Bell Helicopter bid have indicated that not only were the figures manipulated in ensuring that Agusta emerged the preferred bidder but also that this was done by means of inducements offered by Agusta to connected political individuals.

One such figure is George Trail III, Canada’s diplomatic envoy to South Africa from 1980 to the early 1990s. Upon finishing his stint as ambassador to South Africa, he was approached in 1996 by the American office of Bell with a request that he act as a consultant to any future helicopter bid — word was already out that the South African Air Force was looking for helicopters, and already had a staff requirement approved for any future acquisition.

Once the tender was sent out officially in 1997, Trail got to work supporting the Bell team — bidding from the Bell-Textron Canada office, as the United States and Armscor were still at loggerheads about a number of issues. Prior to starting his lobbying drive, Trail was sent to the US office and briefed by lawyers, who explained the US’ Foreign Corrupt Practices Act, which — rarely for a first world country — set out how a US citizen could be jailed for bribing a foreign official. Trail, by his own admission, felt that the briefing was unnecessary, as he had a “good reputation to maintain”.

With this warning from Bell’s lawyers ringing in his ears, Trail set up meetings with key individuals, including “people at the department of trade and industry and the deputy minister of defence”, in order to “make a deal for Bell, explaining about our good prices and our good product”. But, to Trail’s concern, “it became apparent pretty early that this process was not going to be conducted the way it ought to be”. Meeting Chippy Shaik [who was in charge of arms acquisitions] for the first time brought this sense clearly into focus, especially when Shaik’s rather informal approach to discussions became increasingly clear. Said Trail: “Every time we met him, he was by himself, either in his office or in a coffee shop. I met him out in Fourways at one time. He never came right out and said, ‘look, for a certain consideration I can be helpful’. But, what he did suggest was that we hire a company to lobby on behalf of Bell Helicopter.”

Another senior member of the Bell team, who agreed to be interviewed on condition of anonymity, had higher hopes than Trail during the initial stages of the bid. So much so, in fact, that he believed Bell had a real chance of emerging the eventual winner of the contract. Perhaps even more importantly, he had already received some notice from Shaik of the benefit of a potential industrial partnership between the US, Canada and South Africa.

He said he “met with Chippy Shaik several times. The first time we met it was a fairly positive meeting, in that he indicated that it would be a good thing for South Africa and the US to be involved and to get that contract would help that relationship. In the early stages of the game, we felt that we were favoured in that regard”.

Despite Bell’s commitment to the offset programme, according to Shaik this would be only a small and insignificant consideration in the awarding of the contract.

During a meeting between Shaik and Trail, the offsets rug was pulled from under Bell’s feet. Said Trail: “Chippy basically said, ‘Look, don’t worry too much about this offsets stuff. You know, the department of trade and industry guys, they’re small boys, so don’t get too hung up on this.'”

This guy, Tshepo Molai, offered his services to Bell, which would have required $250 000 to set up offices, and $25 000 a month to act as a consultant to Bell. It was just an outright request for money — this guy had no office in Rosebank! There were always these kinds of games: these guys would be given the contracts and then would subcontract to somebody else who could actually do the work. We met with him, and it was clear what was going on.”

Another senior member of the Bell bid recalled much the same interaction, and the same demand for the inclusion of Futuristic Business Solutions as Bell’s lobbying partner.

Interestingly, Futuristic Business Solutions was presented as only one arm of a larger network of former Umkhonto weSizwe cadres who believed that reward should be forthcoming following their years of struggle.

This person recalled: “There was a meeting organised at the Balalaika Hotel. A colleague of mine and another guy who was in the offsets programme met with a group of people. It was a kind of an organisation that was attached to all the veterans of the anti-apartheid movement. [Defence Minister] Joe Modise was there, as well as a white guy. In any case, they had a meeting, and it became clear that one of the things that we were going to have to do was to set up an office to monitor offsets, and we were supposed to hire seven people and run this office for a number of years.

We figured out it would cost about $3-million. As soon as they reported it to me, I thought it was no good. I then called a guy who was in charge of the Armscor side of things, short fellow, Afrikaans, and I said, ‘Isn’t that your responsibility’, and he said, ‘Yes, that’s the government’s responsibility to run this office.’ And that was the first inkling of things to come.”

While the auditor general’s office may have found that there was little in the selection process to be questioned, this was not the opinion of one of Bell’s senior representatives.

Asked how he felt the deal might have been wangled, he revealed a web of spies and misinformation, all facilitated by the tapping of phones. A senior Bell member recalled how, in one meeting, objections raised as to the accuracy of the scores awarded were quickly shot down — it was a minuted meeting, and the acquisitions team required that no irregularities or objections be recorded. In essence, it was a rigging of the tender process before, rather than during, the selection, if the account of Bell’s representatives is to be believed.

Said one: “We discovered that people were bugging our phones late in the day unfortunately. We had Trail’s house swept and we found a bug. They were bugging our cellphones and that’s how they knew about some of our proposals for the offsets we were offering.

“With one of the military guys, there was some suspicion in our camp that he was in favour of the Augusta bid. We remarked about this, and we must have mentioned it on the phone. I met him at a cocktail function, and he commented on it, so it became very clear to us that he had been told about the conversation.”

It would, of course, be easy to dismiss these claims as the ramblings of disgruntled arms dealers from the US and Canada, unable to believe, with their colonial arrogance, that their bid may genuinely have been the worst on offer. Unfortunately, it seems that the Scorpions, too, had become suspicious of the way the bid had been handled. According to the proclamation that set out the boundaries and parameters of the Scorpions’ arms deal investigations, both African Defence Systems and Futuristic Business Solutions had, indeed, received large success fees once the contract had been granted to Agusta.

To quote in full from the proclamation: “Whereas I have further reason to suspect that the above-mentioned specified offences – of fraud and corruption — have been committed or are being committed or that attempts were made or are being made to commit such offences arising out of the armaments acquisition for the department of defence whereby Agusta Un’ Azienda Finmeccanica SPA appears to have paid undue benefits in the form of success fees to Futuristic Business Solutions for its successful selection as subcontractor for the supply of integrated logistic support, services for the light utility helicopter project.”

On investigating, the Scorpions determined that Futuristic Business Solutions had, indeed, received a considerable payment from Agusta on January 19 2000, weeks after the arms deal’s official unveiling. That this was a payment for “services to be rendered for logistic services”, the official description of the services offered by Futuristic Business Solutions, was in serious doubt, considering both the political nature of its office-holders and the fact that, much like Nkobi Holdings, it had little competence to undertake the work. Agusta declined to comment on the allegations.