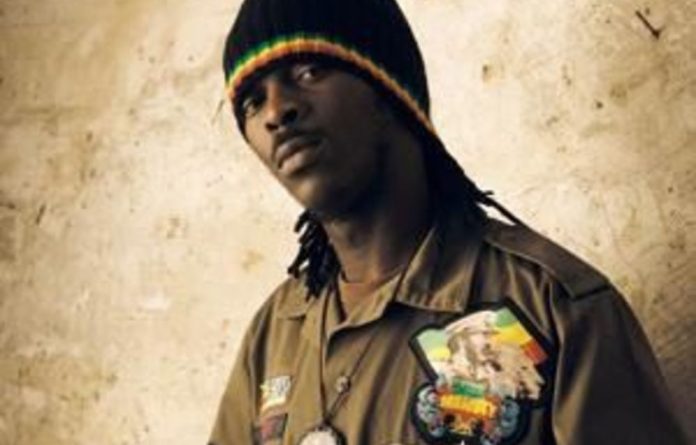 For a long time, while honing his craft, Gugulethu artist Black Dillinger was more an apparition than a real presence.

Ten years ago, during an Awesome Africa festival performance by Jamaican Dawit Menelik Tafari and Cape Town’s formidable Azania band, a young Dillinger, with sprouting dreadlocks and flowing robes, appeared from the side of the stage to deliver a blistering verse in a melodic toasting style.

But just as swiftly as he made his way to centre-stage in time with the hot-stepping dubwise groove, he disappeared, changing the weather but not stealing the thunder.

It wasn’t that sing-jaying — a dancehall staple given new fervour by the then reigning Rasta zealots — was a new phenomenon. This was more about the proficiency with which the technique was rendered. It was obvious that Black Dillinger had studied the patois, a necessary rite for any artist serious about a Jamaica-approved reggae career. And he had studied perhaps the most influential artist in reggae since Bob Marley — the maligned but still respected Sizzla Kalonji.

“Sizzla is an inspirer of Black Dillinger,” he says on the phone from Gugulethu. “He was the conscious artist during the era of my uprising but, all along, I have been working on my own identity.”

In the ensuing years Dillinger would record a slew of tracks, make a strong impression on 2004’s African Dope Soundsystem and end up in Germany the following year, where he released his first album, Live & Learn, on the MKZWO label.

The Sizzla comparison, though, endures, prompting scribes to wonder how it will affect his legacy. It is something the artist deflects casually, as he did with a Peter Tosh lyric — “Dis man an dat man ah di same man” — when German reggae magazine Riddim broached the subject in 2007.

Spreading his roots
In many respects 2007 was a breakthrough year for the Capetonian. In September of the same year Dillinger, then living in Berlin, travelled to Jamaica to record a few tracks for his second solo album, Love Life. He was received enthusiastically by Bobby Digital, one of the great reggae producers of the modern era who, incidentally, is also responsible for three of Sizzla’s best albums.

Melodically and lyrically, Dillinger felt at home on Digital B’s computerised roots productions. He was at peace in the languid opener, From a Place, and then displayed controlled but passionate ecstacy on One Big Nation. The latter is a deep, bassy, one-drop beat showcasing Digital’s trademark, solid amalgamation of digital rhythms and consummate instrumentation.

“When I got there everybody was recognising me,” he says. Although he remembers his pilgrimage with childlike excitement rather than with sage sobriety, the resulting album suggests a critical artistic triumph. The 20-track offering takes its place among classic South African reggae albums, alongside fellow Gugulethu pioneer Zoro’s Gugs News.

Despite his rising star overseas and limited prospects of repeating the same feat locally, Dillinger was back in South Africa by 2010, driven by a yearning to be recognised at home as he was elsewhere. It has been a period he describes as both exciting and disappointing. On the one hand, his versatility and credentials cast him as the go-to guy for local artists looking for that rough-edged ragga flavour, having recently recorded tracks with rappers Zuluboy and Prokid, Afro-pop artist Ntando, kwaito star Zola and some of the artists on Zola’s label Guluva Entertainment.

His pocket change, in the form “dubplates” (once-off special recordings for mobile soundsystems), continue to trickle in on a weekly basis. (Dubplates are worth hundreds, and sometimes thousands, of euros each, depending on the artist’s stature). But for the club and festival money, he has to stay put for a ­European summer.

Home truths
Meanwhile, he is shopping around for a distribution deal for his catalogue, with his latest addition being Better Tomorrow, produced by an Austrian production pair known as Richvibes.

Better Tomorrow is the result of a week-long studio binge fuelled by the youthful enthusiasm of Richard Kratky and partner Moritz Winkler.

One can’t help but cross fingers for Dillinger because not much has changed in the mainstream media’s attitude towards dreadlocked, Haile Selassie-praising rebels with an obsessive fixation on the immolation of Babylon (“black and white downpressors”, he clarifies).

His recent video, Volcano Erupt, was nominated for a Channel O award in the dancehall category but he didn’t win. He was also rejected by premier South African video show Live, as new videos by kwaito’s reigning set had to take priority.

I was reminded of a conversation with Zoro, who, when shopping for a deal, was told by a record executive he wouldn’t know how to market his music, while a shimmery Sean Paul poster hung behind him.

African Dope Records partner Fletcher, producer of the epochal African Dope Soundsystem, believes all it will take is one or two artists to cross over and have a pop hit that will “open the floodgates” for the genre.

“Dub and modern mutations of reggae [like dubstep] are starting to break out,” says Fletcher.

“If you take an artist like Crosby [who also cut his teeth as part of the Chronic Clan], he totally brings his own flavour into it. All modern electronic music can be traced back to dub.

“As we speak, he is in Reunion on a tour with [electronic group] Mix n Blend — It’s the artists who need to create the scene, which is something that artists are not generally good at,” he says. “It also needs management and promotion, which has worked well for other scenes.”

Perhaps Zoro’s recent return from Sweden signals a regrouping for the Chronic Clan. With Cape Town already established as a dependable source of diverse reggae voices, perhaps it is time for a more concerted Garveyist approach to invigorating the local scene. The Rasta elders in Cape Town’s ghettoes, long preaching the end of Babylon, would expect nothing less.

Black Dillinger’s albums are available on iTunes and amazon.com