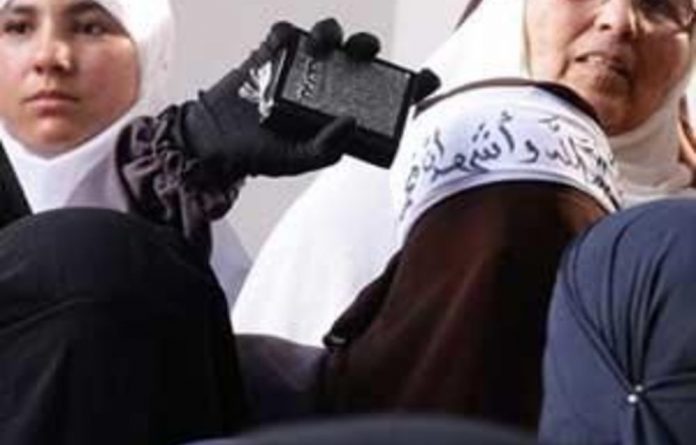 Thousands of Islamist supporters descended on central Tunis on Saturday to confront liberal demonstrators rallying against extremism as lawmakers draft a new constitution for Tunisia.

Separated by barriers and police, they shouted insults at each other outside the Bardo Palace where the constitution is being compiled after a vote that saw the moderate Islamist Ennahda party win most seats on the drafting body.

The Islamists waved Ennahda flags as well as the black banners of the Salamis Hiz Tahrir, which has not been legalised in the north African country.

Ennahda spokesman Noureddine Bhiri, whose party denied being behind the Islamist rally, went to try to calm the situation as police reinforcements and armoured vehicles were brought in to block the entrance to the palace.

Hundreds of students, teachers, unemployed miners and other protesters began gathering on Thursday at the Bardo Palace with various demands.

University demonstrations
The protest was partly a response to ongoing demonstrations at a university outside the capital, where Islamists disrupted classes and demanded a stop to mixed-sex classes and for female students to wear the full-face veil, or niqab.

However, secularist opponents said they believed Ennahda’s true agenda was to create an Islamic state by stealth.

“The Islamists … want to use the constitution to take power, and stage a coup d’etat against democracy,” said one of the secularist protesters, Raja Dali.

Long-time Tunisian leader Zine el-Abidine Ben Ali and his staunchly secular regime were ousted in a popular uprising in January and the country has no government yet, while the economic situation is worsening.

“They want to give all the power to the prime minister,” she said, referring to senior Ennahda official Hamadi Jbeli who is his party’s nominee to lead the coalition government.

Central bank governor Mustapha Kamel Nabli was quoted by the TAP news agency on Saturday as saying that growth this year will be zero while unemployment will move up to 18%.

Feeling effect of the revolution
The tourist sector has been hard hit by the revolution, with foreign visitors preferring to go elsewhere, while the phosphate industry has seen production plummet because of a series of strikes.

In addition, some 100 000 Tunisians working in neighbouring Libya fled back home during the upheaval that overthrew Muammar Gaddafi’s regime and are left without jobs.

In a statement issued on Friday, the central bank demanded that its independence be guaranteed in the new constitution, as a draft law threatened to place it under government control.

Ennahda, with 99 seats in the constituent assembly, is accused by some of seeking to concentrate all powers in the hands of the new prime minister; the party’s number two, Hamadi Jebali.

The assembly is due to vote in the next few days on a power-sharing deal which would make left-winger Moncef Marzouki the country’s next president. — Sapa-Reuters

Self-diagnosis and symptoms are recipe for paranoia — just see the doc, take the meds and Bob’s your uncle
Read more
Opinion

Reporting on queer issues is always tough. But Tunisia was something else
Read more
Global